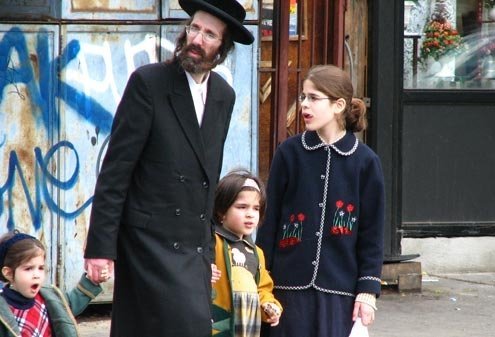 Williamsburg, in Brooklyn, has a large Hasidic Jewish community.
B

y definition, a prowler is someone who moves around stealthily or loiters near a place usually with criminal intent. But I’m a different breed. I don’t lurk. I don’t hide in dark alleyways. My prowling is benign. I am not a predator but a storyteller.

You could say I bark but don’t bite, if only I barked. But I don’t that either. I do pay attention.

I’ve lived in five cities since I graduated from college six years ago, which can seem like at times like an unbelievable amount of time. The bacchanal of east coast American university life dissipated quickly and I found myself in San Francisco. I knew nearly no one and worked in grocery store slicing meat. I loved it.

The store — Bi-Rite — was in the Castro Mission district and I suddenly faced a new cast of characters. I remember sipping coffee on my fire escape while watching a gay couple as they watered their herb garden. My existence was no longer tied to small town Virginia, where I grew up, or to the collegiate world around it. Cheesy maybe, but my new life felt wholesome — and it had nothing to do with the kombucha and organic food.

My prowling began in San Francisco and carried over at home in Charlottesville, and later in Italy and Berlin, and now in Brooklyn. Call it my survival mechanism. It let me get to know a place before social interaction devoured me whole.

More importantly, it helped me understand the layers of a place outside of their pending context in my own life. What feet walked that pavement each day and to where did they later retreat? Who were the strangers around me daily whose lives I knew nothing about?

In school in Bra, south of Turin, there was a Smile Caffé directly across from my apartment where Italian adolescent boys with gelled up hair and tight purple shirts would sip espressos and wave to me when I got home, sweating like a mule. I’d just biked back from school, the University of Gastronomic Sciences. I remember that Lady Gaga played all summer long.

That wave was my only interaction with them outside an occasional cappuccino. Whether at the alimentare, spice store, or wine shop, the language barrier intervened. Words soon became mere undercurrents, with gestures taking their place. The kiss on the cheek, the ciaoooo: these were the daily protocols of my then home.

I mention it now because it almost seems fresher. But memories, especially fond ones, can blur the lines.

Back in New York, I’ve found new territory to prowl and I prowl it hard. I live off the J, M, and Z subway lines — each one running from Manhattan into Brooklyn and back, day and night. If I opened my window I could have a conversation with the people waiting on the platform. I could even invite them in for tea. My apartment is in between a Checkers and McDonald’s. The latter rents its second floor to a Baptist church group that makes waves on Sunday. I hear the reverberation of the gospel sounds and the bellowing of voices giving praise.

Most of the areas convenience stores seem to be owned by Palestinians, many of them with Hassidic Jews as customers. Inside are kosher goods, toothpaste and toilet paper. There’s also Mr. Pina’s, Mr. Pineapple in Spanish, owned by a Chinese family, of course. It’s the local bodega whose trump card is its two juicing machines. Two Chinese girls — one plump, one skinny — crush beets and carrots and leafy dark greens. I’m sucker for these juices.

Further afield is the sophisticated end of Williamsburg where foodies and hipsters break bread (some of the land here was originally bought by the Dutch from local native Americans in the early 17th-century). The proliferation of farm-to-table joints, spearheaded by Marlow and Sons, which also masquerades as country store-cum-restaurant, makes me feel at home. City or not, I’m still from the countryside, from a place with hawks in the skies and wells on the land. Still, the $8 dollar biscuit — although it’s dern good — has a way of swiftly reminding you that you’re not Kansas anymore.

If you continue walking you hit the Williamsburg Bridge, which was completed in 1903. At the time, it boasted “the longest suspension span on Earth” — with something about the phrase “on Earth” making everything in the so-called New World sound especially important. This is where my prowling usually kicks off — after I’ve juiced and loaded up on my quotient of carbs and lard for the day. Oy vey and you’re off.

So, this column is about prowling and the invisible lines it makes whole. My stories will come from those invisible lines — from those things that often are forgotten or brushed away in the zeal for all that’s new. The past six years have taught me a paradox, namely to look for the invisible, to bring into focus aspects of a city that are unexplored or forgotten, to bring alive the human transactions and incidents that bring a place to life.

What better start for a benign prowler?