On the Natural History of Destruction 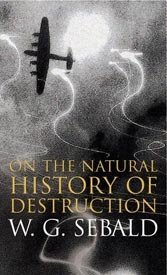 By W.G. Sebald, translated from the German by Anthea Bell

Making sense of modern European writing requires the Sebald ingredient, a melancholy wild card that insists contemporary literature also include history, genealogy, geography and how they play into the larger act of remembrance. The latter always fascinated Sebald, a German who taught literature in England but couldn’t get around a fascination with postwar German dispossession as a state of mind and aspects of World War II as a challenge to morality that not even time could repair.

Though best known for three stunning “road trip” novels, “The Emigrants,” “Vertigo,” “Austerlitz” and “The Rings of Saturn,” each one a meditation on the hows and whys of being, this critical volume is vital to those interested on Germany’s wartime framework outside the Nazi focus. Sebald’s four essays — part of a lecture series — tackle the massive Allied bombings of German cities, which killed tens of thousands, but which in many respects were lost to history, and to German guilt. War is war. Bombs are bombs. People die in droves with the victors writing most history.

Still, Sebald picks at the scabs of the German silence, generated, he suggests, by “vague feelings of shared guilt.” Post-Holocaust Germany was glass house in which no one dared pick up a stone. He rummages through the works of dozens of authors — focusing on three, Alfred Andersch, Jean Améry and Peter Weiss — in an effort better understand the substance of this selective and collective forgetting. “The necessity of continuing to protest,” he notes, is “a dimension strikingly lacking from postwar German literature.” The million tons of bombs dropped on Germany vanished, a “shameful family secret” that Nazi misdeeds buried.

Early on, Sebald, born in 1944, speaks of “horrors I did not experience … [that] cast a shadow over me, and one from which I shall not entirely emerge.” That shadow becomes a narrator of sorts, probing wartime cave dwellers and their rat kingdoms. The question here, free of sentimentality or exoneration, is whether human catastrophes “are a kind of experiment, anticipating the point at which we shall drop out of what we have thought for so long was our autonomous history and back into the history of nature,” a nature that destroys by rote and forgets at will. Based on wartime deeds, civilization, “a strange luminescence,” is not guaranteed.