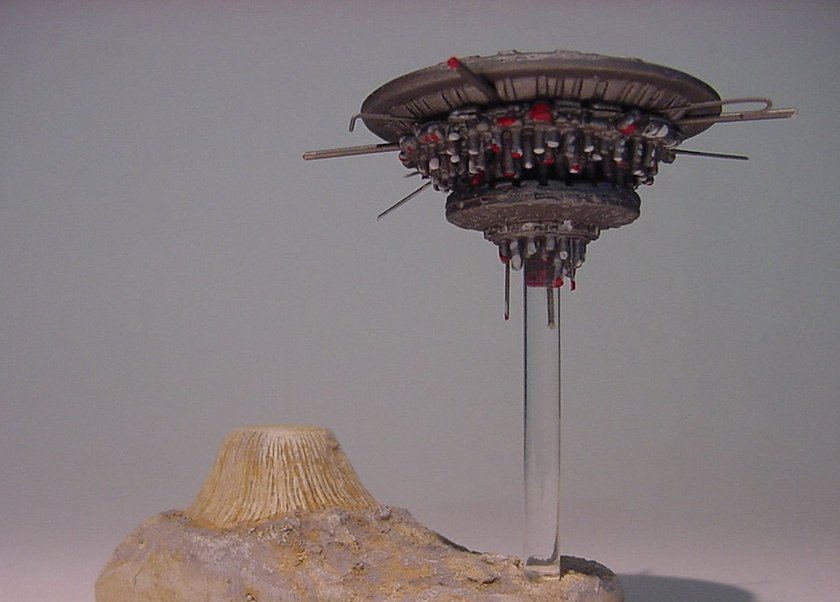 The alien mothership in Steven Spielberg's 1977 "Close Encounters of the Third Kind."
N

ow, I know you’ll never believe it. And I can’t blame you if you don’t. I can hardly believe it myself all these years later.

Yes, I had a close encounter. But while Steven Spielberg’s “Close Encounters of the Third Kind” was fanciful fiction, what I’m about to tell you actually occurred.

I saw the thing, whatever it was. Or better said, we saw it, because I was not alone.

It happened long ago, more or less around this time of the year, and all the years in between have not blurred the vision in my memory. I still see it, hovering in midair, on a clear late spring morning.

Every morning, Monday to Saturday, at a quarter to eight, my daughter and I would leave home, in a village in Salento, in the south of Apulia, bound for Gallipoli, to get to school perfectly on time: I, in my capacity as a teacher of English and deputy headmaster in a middle school, and Alessandra to attend her Greek and Latin lessons at her liceo, just a few meters away from my own school. Along the way, we would stop and collect a couple of her schoolmates and drive along State Road 274, at the time still a single lane. But we did not go all the way straight to town. Instead, we’d make a short detour, turning left at a crossroads more or less half way to our destination, and then follow a dirt road through the marshlands, before reaching the seaside lane leading to Gallipoli. I loved seeing the wildlife in the morning, especially in spring, with wild fowl paddling in the shallow waters of the ponds amidst the cane thickets, and gray herons and egrets standing stationary near the shore, sometimes perched on one leg, or stalking their prey.

The wild fowl paddled in the ponds, and gray herons stood stationary near the shore.

I also loved the panoramic view of the sea, its iridescent colors, an ever changing palette from aquamarine to emerald green and, a bit farther from the shore, dark violet (which called back to my mind “the wine-dark sea” of the Homeric poems). The effect was caused by the abundance of posidonia (seagrass with foliage), as my marine biologist friend and colleague would tell me, or by the rioting billows of white foam and bluish-gray that arose when it was stormy. I found it a relaxing way to start my working day.

That morning we were about to leave the dirt road and turn into the tarred lane for the last stretch of our daily journey when Alessandra asked: “What is that?”

“Our” UFO as envisaged by Canadian artist Sheryl McDougald.

“There on the left, over the sea.”

The sea was calm and deserted.

I was about to turn right and a few tall eucalypti blocked the view on the other side. As I entered the coastal lane I looked left. And I saw it.

I pulled the car to a stop on the right shoulder and we all got out. We walked to the other side of the lane, up to the edge of the beach, our eyes fixed on the object. The “thing” was large, maybe the size of a bus, brownish. It was about a hundred meters or so from where we stood. It was still, in midair, at about sixty or seventy meters from the surface of the water. It had a peculiar shape, not really the flying saucer depicted in science fiction stories or appearing in movies. It was quite circular, with rounded edges. It gave the impression of being made of some kind of metal, but maybe it was not. The paint, if it was paint, was matte. It could also have been rubber or plastic or some sort of unrecorded material or alloy.

The thing did not resemble any kind of aircraft known to me. Was the military testing some new secret weapon? A new revolutionary and deadlier warplane? But which military? And why here, at this time of the day? Or was it exactly what it seemed, an alien spaceship, because it was alien to us, in the true etymological sense of “alius,” other. It looked a bit like a huge circular life raft, with a conspicuous semi-bulbous swelling at one end, on the upper side, turned seaward, suggesting that this section might be the bridge, or the main deck, if the object was manned.

We could perceive a sort of low and muffled humming coming from the object.

Can we say manned? Creature-operated, maybe? Were there really creatures inside? Were they observing us as we were watching the thing, spellbound? Were we the first humans they had come across? And what could they make of our aspect, the vehicle we had just disembarked, our hair, our skin, our clothes, the environment probably utterly “alius” to them? If there were any “them” in the thing. They could be robots, androids — again, I am not sure we can say androids, damn classical education, let’s say creature-shaped — sent on a reconnaissance mission. A much larger spaceship, so to speak, a much larger thing, might be waiting for the return of the explorers, maybe hidden behind one of the planets of our solar system.

We were facing the sun, but we could vaguely discern the shape of a few ellipsoidal windows on the side, closed, the same uniform color of the craft. We could perceive a sort of low and muffled humming coming from the object. It was after a few minutes, but it felt much longer, that I remembered what I kept in the trunk of my Peugeot 309: a bag, containing binoculars, a camera, film, lens and zooms. I used these in my spring bird-watching excursions in the marshland. I suddenly turned and ran to the car, flung open the trunk and started to bustle about the bag that wouldn’t open. I heard Alessandra’s voice: “Dad, it’s going away!”

I turned and saw the object rotating and nosing south, inland, slowly and with a slight increase in the humming, its motion accelerated, speeding up steadily. A few seconds later it was already a tiny dark dot that disappeared behind a low hill, leaving me standing by the car, looking in wild amazement. By that time I held a useless Miranda MS-3 reflex camera in my hands.

Were they frightened by my sudden race to the car, my rummaging in the bag, my laborious unearthing of a strange black object? If there were any “they,” of course. We knew there would never be an answer. We climbed back into the car.

“Did we all see it?” I asked. Everyone nodded.

I restarted the engine and we drove the few kilometers left to Gallipoli in puzzled silence, the walled old town on the island, the panhandle-like bridge, and the tall buildings on the mainland already within sight.