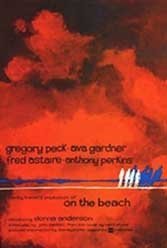 Hollywood’s clunky adaptation of British-Australian novelist Neville Shute’s post-apocalyptic novel of the same name is static, predictable and never really as ominous its grave subject matter. But given the film’s 1959 release date none of that may matter. Atomic apocalypse fears peaked in the late 1950s, with the 1962 Cuban Missile Crisis dialing up the volume even further. As a morality tale about a world gone mad (at a time when the world seemed mad), director Stanley Kramer’s black and white production tugged at an array of anxieties, and that by itself may offset its many weaknesses.

A muted Gregory Peck is Commander Dwight Lionel Towers, commander of an American sub USS Sawfish that’s made its way to Australia after nuclear fallout from an unnamed conflagration has wiped out the northern hemisphere — killing the captain’s family and that of the crew, though all remain in semi-denial. The stiff-upper-lip Aussies know the fallout will soon blow south, making all good cheer ring fake. Towers is named de facto American commander and sent on a last-ditch mission northward where a signal’s been picked up. It’s an eerie voyage that includes images of an intact but deserted San Francisco.

In Australia, he becomes involved with Moira Davidson, a miscast Ava Gardner. Only Fred Astaire in an atypical role as guilt-ridden nuclear scientist Julian Osborne — at once angry and self-destructive — saves the movie from repetitive doldrums. Young, brooding Anthony Perkins is Lieutenant Commander Peter Holmes, an Aussie (father of an infant) charged with projecting the melancholy face of hopelessness.

As a period piece, “On the Beach” balances fear, resignation and romance in the way some better post-9/11 filmmaking placed terrorism in the nagging backdrop of unrelated human drama. Once upon a time, the atom bomb trumped all around it as a source of social anxiety and public protest. Says Astaire’s Osborne: “The war started when people accepted the idiotic principle that peace could be maintained by arranging to defend themselves with weapons they couldn’t possibly use without committing suicide.” This is lest-we-forget filmmaking that retains relevance decades later.