On Pope Francis and war 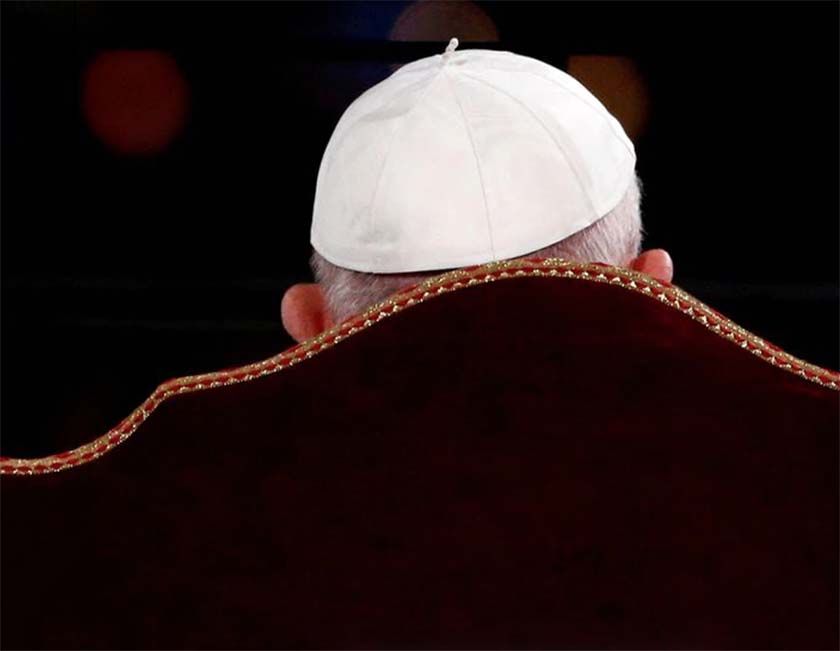 Pope Francis: rarely, if ever, confrontational, which now works against him.
I

n most of the West, Pope Francis I is facing furious media and public indignation for his unwillingness to openly reprimand Russia’s two-month-old invasion of neighboring Ukraine and the massacres of civilians that have occurred as a result. His decision to acknowledge the event by having two young Rome-based nurses from Ukraine and Russia share in the carrying of the cross during the pre-Easter Via Crucis — the annual papal re-enactment of Christ’s death walk to the cross — has been especially mocked, portrayed by some as a shockingly inappropriate gesture of conciliation that reeked of the the 21st-century West’s most loathed and thus overused word: appeasement.

At a time that begs the West’s two favorite flavors, outrage and confrontation, the pope is unwilling to join the secular anti-Russian choir, reflecting in the eyes of the West a religious leader who has, for whatever reason, lost his moral compass.

It is a troubling state of affairs since the Jesuit pope was once the darling of the enlightened world. In the early years of his now nine-year papacy, he spoke openly about social issues, decrying the abuse of women and insisting he would not judge the way in which love was expressed, a clear if brief reference to discrimination against homosexuals. 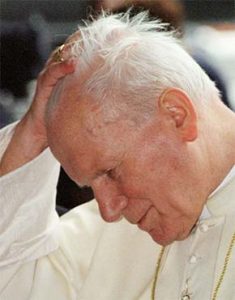 Pope John Paul II, a proud Pole to the core, was perhaps the most political pontiff in modern history.

The honeymoon ended with a raft of American sex abuse scandals in which thousands of priests were implicated and in some cases proved to have molested young altar boys and youthful parishioners, which pushed the Vatican into a corner from which it has not yet fully emerged. This onslaught placed the previously tranquil Francis, a former Argentine cardinal and archbishop, squarely on the defensive and diminished his sheen.

The Ukraine war has taken matters a step further. Francis is now perceived by some in the vein of Pope Pius XII, who denounced Germany’s World War II aggression but did little to ensure the world was made aware of Nazi death camps.

The harshest Francis critics have gone so far as to note that Pius at least acknowledged and decried the Nazi reign of terror. (The Holocaust is another matter entirely.)

More frequently mentioned is the name of Pope John Paul II, a Pole who played an instrumental role in the discrediting of communism, and, several years after that atheistic system collapsed, repeatedly called attention to the 1990s Balkan conflict and the atrocities set in motion by the Serbian regime.

Why then is Francis failing to call down Russia?

First, a caveat: In their denunciations of oppressive regimes, popes never mentioned specific leaders by name and often left out the names of countries. They assailed “aggressors” or “the inhumanity of recent events,” allowing the faithful and others to fill in the blanks. John Paul did not place the burden of guilt on Slobodan Milošević and his macabre lieutenants but, again, on aggressors and “criminals” committing unconscionable acts.

As a Pole, John Paul, the former Archbishop of Krakow, ascended to the papacy directly from the front lines of Catholic resistance to communist authoritarianism. In that sense he was a pastor and militant, a unique combination the Church had never before seen and who some insiders resented as too worldly. In essence, Karol Wojtyla, the given name of the pope, had been locked in battle with the godless communist “aggressors” for years.

Not so for Francis, who maintained a low key existence during his prelate days in junta-ruled Argentina, a country already known for repeated clandestine massacres of civilians — most accused of communist leanings. He took a path entirely different from that of Wojtyla, setting aside so-called Liberation Theology, or militant Church opposition to military rule, in favor of brokering behind-the-scenes peace deals, work that called for a sense of delicacy that is in direct contrast to sentimental outrage. He believed more could be accomplished in that manner than by openly challenging the regime. It is a choice Church scholars have openly questioned and has now returned to the forefront because Francis’ silence can seem to confirm his appeasing tendencies.

These are, to put it mildly, times of black and white, of the good and the bad with all nuance removed — and Francis is in the crosshairs of the all-or-nothing trend.

Another critical ingredient is timing. John Paul called attention to Balkan horrors in part because much of the West was asleep. With communism defeated, many countries, including the United States, saw no need to intervene in a nasty Slavic-bent civil war. But, for the pope, that civil war was an extension of the worst of the old regime, since Yugoslavia had for years been a part of the Soviet bloc. The pope leapt in to wake the West and over time succeeded. Serbia was pushed back and its militia leaders later tried for war crimes.

The Russia-Ukraine affair could not be more different. The West responded immediately and in angry unison. It all but banished Russia from the economics of the planet. The European Union united. Poland opened its doors to refugees. There was no Balkan half-heartedness. The West’s political forces coalesced in such a way as to make papal denunciations unnecessary. No one slept, and the outrage at times grew so strong as to become a caricature of itself, making Russia’s move — the brainchild of its president — the first such barbarity in human history. It is not, and it was not. Take, for example, the 2003 American invasion of Iraq. Pope John Paul full well knew that invasion rested on questionable moral high ground, but rarely made mention of aggressors, only suffering. To go any further would’ve politicized the papacy. 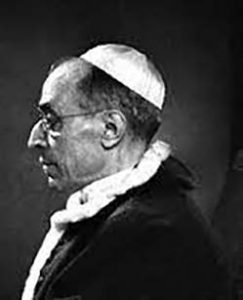 Pius XII was critical of Nazi Germany but silent on the Holocaust, which has undermined his legacy.

Now, Francis, instead of verbally flagellating aggressors, has taken the path of conciliation, hoping in some way to help the two nations de-escalate the rhetoric of outrage and, in the words of the late John Lennon, “Give peace a chance.” In this he has proved he is no John Paul, at least when it comes to direct confrontation, and has placed himself on the wrong side of the righteous, a very bad place to be in these highly incendiary times. Some bloggers have gone so far as to say he should be charged and tried for complicity.

This emotionalism is typical of times that place visceral reactions ahead of historically informed thinking and use bullies and viruses to fan rampant fear and loathing. Feelings and thoughts are extreme or lack validity. Little occupies the middle. Those who say, in hushed tones, that the Russian president snapped as Ukraine grew more and more insistent on joining NATO, an organization whose underlying purpose was to protect Europe from Soviet Russia, attacking Russia if necessary, are cornered in a place of shame. Those who point out that Ukraine was indeed a (forced) part of Russia, but very much a part of it for centuries, are excoriated as fascist thinkers. And the few who note that the Western response was in part triggered by an American president who was a great commercial and political friend of an anti-Russia Ukraine are told to mind their own business.

Pope Francis is the leader of Catholic Christendom and no fan of wars. Only he’s chosen to go about his response prudently, which at present, amid the endless abetting of outrage, is labeled as unacceptable, if not morally dubious — all the more so because Poland, John Paul’s homeland and a deeply Catholic country, has absorbed millions of Ukrainian refugees, its citizens convinced “their” pope, with an intimate understanding of Russia’s perceived arrogance, would have defended besieged Ukraine more vigorously. Perhaps above all else, the insults directed at Francis reflect not so much the war itself but the temper of these unbridled times, in which blame must at all times be located and imposed, as was the case in another epoch with heresy.

So it is that a wave has arisen and grown suddenly in girth and height, the vehemence of the West’s “good” rising to meet the ferocity of Russian “evil,” with Pope Francis, a sensible, good, and decent man, suddenly situated squarely, and perhaps lastingly, in harm’s judgmental way. Like the war, it is painful to behold.

— EDITOR’S NOTE: On Easter Sunday, clearly chastened by the criticism against him, Pope Francis referred to an “Easter of War” and specifically mentioned Ukraine, warning of the possibility of nuclear conflagration.