On Maui and change (Hawaiian reflections 1) 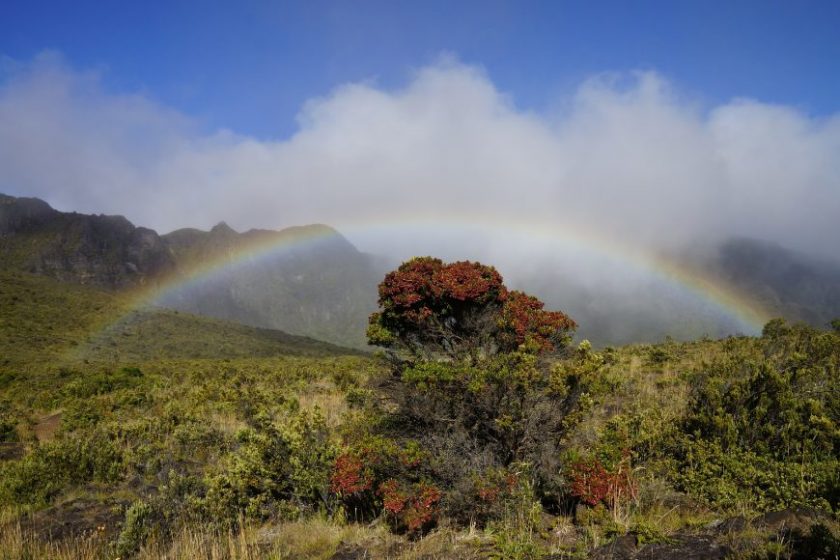 A rainbow dances over the natural setting of Maui, tempting corporate greed; a writer mourns the loss this brings.
I

n 1893, President Grover Cleveland sent the U.S. Marines to the Kingdom of Hawaii to overthrow the monarchy. The goal, reached by 1898, was the complete annexation of the islands, for their business prospects. Without provocation, the U.S. destroyed a country which had not threatened, well, anyone, let alone one of the most powerful nations on earth. All for a buck.

Of course, this surprises no one. Today the U.S. goes to war not for pineapples but for oil, but the principle has not changed.

Hawaii has changed, though.

The marines weren’t the first Westerners to arrive at the most remote island chain in the world, as measured by its distance to any continent. In the eighteenth century, English explorer Captain James Cook showed up, and for his troubles, he was eaten. Sadly, colonists did not take the hint.

In the eighteenth century, English explorer Captain James Cook showed up, and for his troubles, he was eaten. Sadly, colonists did not take the hint.

The first time I came to the island of Maui, the sleepy north coast town of Paia didn’t have a traffic light. It had a stop sign, which was stuck into a truck wheel in the intersection. The wheel was filled with concrete for weight. The sign tilted, and on most days a dog slept underneath it. Navigating the intersection, drivers had to be careful not to run over the animal. The animal never was.

Now Paia has a traffic light, and in some rush hours, it can take thirty minutes to get through it, a running distance of about a half mile. Even though several studies have proven that traffic circles are cheaper, safer, and more traffic-friendly than lights, few are planned in the U.S., or here.

Change has been merciless. State law mandates that the coasts of all the Hawaiian Islands — 1,500 of them or so, although only eight are occupied — belong to everyone. Since 1959, when Hawaii became a state, paths to the ocean have been built off the roads and trails, so that everyone could access the beaches.

One of my favorites was in southern Maui, a place called Makena. We would park along the dirt road and walk through the “Chinese Cemetery,” named because in the nineteenth century an enclave of Chinese immigrants settled there, and buried many of their dead.

We’d walk quietly over the springy moss, under old trees which shaded the buried, and say hi to the dead.

We would then step gingerly down a small, craggy inlet covered in sharp rocks of deep brown lava, plunged into the ocean. There, not thirty yards out, there lived a community of green turtles; often we would see them on our way.

In case you haven’t met a green turtle, I will tell you they are about the size of a full grown pig, usually much gentler than said comparison, and quite inquisitive.

Laws try to protect green turtles. You cannot approach them or touch them. What was thrilling was they would approach you. You would tread water, and their heads would pop up and look at you. You could see them wondering what, or who, you were. Then they’d plop underwater again and swim to the bottom for sweet sea grasses and some peace.

You can’t get there anymore, unless you hire a boat, and come in from the ocean. The access has been destroyed by the rich, who have built million-dollar homes along that now paved road, and posted every bush and fence with “private property” signs. It’s their coast now. Good luck suing them.

Of the eighty-six access points to the Maui coast listed in a dusty old brochure I used to carry with me, you would be pressed to find thirty open today.

Now all this, and much more, you might frame as nothing more than the disappointed ramblings of a man who abhors change, and after all, as the saying goes, change is inevitable. You’d be wrong, of course.

In 1976, I hiked the Swiss Alps, and rested on a bench near Kleine Scheidegg. I looked over the breathtaking valley which lay below the Jungfrau, and the north face of Eiger Mountain.

Exactly forty years later, in 2016, I sat at that same spot. No fences or billboards blocked the view, no path was paved, no homes for the rich built, no McDonald’s arches were seen anywhere, no sign said “private property.”

Before I did, however, I learned a few lessons. I’ll share those next time.

— This is the first in a two-part series about Maui, the Hawaiian island where the author has resided for decades.