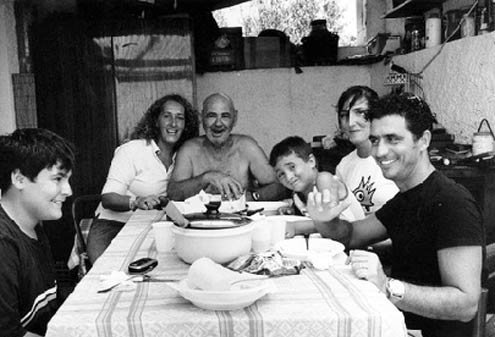 The table, elite or casual, is a place where ritual is acted out.
W

henever I tell people I live in Milan, they immediately gush about how well they ate while visiting Italy. They had the most amazing pasta! They had the meal of a lifetime in a trattoria or in a restaurant with a Michelin star! The tomatoes were incredible! It’s foodie heaven! How wonderful to eat like that every day!

Italy is blessed with food advantages, including a long growing season, a varied climate, colonizers and invaders who brought new foods, and poverty that bred culinary ingenuity. But that’s not all.

Many visitors sense the presence of something else. Some try writing about it, attested by a sub-genre of books by starry-eyed expats who move here to live a “genuine” Italian life. Although it’s not about Italian food, Adam Gopnik’s book “The Table Comes First” has the right idea. What goes on around the table, Gopnik says, is as important as what is on it.

The domestic rites that regulate the sharing and preparing food for the Italian table are so deeply ingrained into Italian daily life and habits that most visitors don’t have access to them. Italians, for their part, are often unaware of the habits rooted in their own unconscious. Italian food varies widely from region to region and recipes vary from house to house. But eating rites transcend region, just as they transcend economic and social classes.

Preparation is key to any ritual, so Italians set the table with care. While they might use the same fork for more than one course, no one would dream of not changing plates between courses. Italian cooks may be spontaneous and base the day’s menu on what’s best in the market that day, but they are not slapdash. Microwaves and frozen, prepared foods are used sparingly, if not furtively. Cooking and shopping deserve and take time.

Even in the most humble homes, meals have several, well-defined courses: antipasto, primo piatto, secondo piatto and fruit or dessert. Though not every meal will offer every course, most will have at least three of these. Italian meals last longer than American ones. Most Italian families still sit down and eat dinner together.

Working Italians don’t have a “lunch hour.” Instead they have a pausa pranzo, or a lunch pause. Their mid-day meal put purpose over length. Like interval training in sports, the break is an opportunity to consolidate productive activity and to recharge for labors to come. In smaller towns, many Italians still go home for lunch.

Most schools end by lunchtime (they make up with Saturday classes). In elementary schools and kindergartens where lunch is served, children sit together at large tables with their teachers. Food-service staff serve the primo, secondo and fruit. The most important committee in these schools is the comitato mensa, formed of parents who visit the kitchens and approve menus.

In Italy, food and friendship are inseparable. To describe a friend who is close, solid, unpretentious and faithful, Italians use the expression “someone you eat pasta e fagioli with.” Pasta e fagioli is an everyday, poor man’s dish, nothing to serve guests you want to impress. What counts is not the value of the food, but its sharing.

For Italians, it is the meal, not the food eaten that holds families together, forges social bonds and creates national unity. Meals encourage respect for the natural world of changing seasons and for the human need to be social and share. Whether or not they can verbalize it, Italians know meals are a counterpoint to physical and mental activity. They are a temporal and ritual space in which to exercise our humanity.

In the U.S. however, food has become both a national obsession and a paradox. Americans feverishly attend classes, watch cooking shows, and follow chefs who attain celebrity status. They compete to find the “best” and rarest ingredients. They fret about sustainability, calories and better food labeling. They create new recipes and generate fads at warp speed.

But the paradox is that the interest is limited to the food; food as fuel, food as status, food as a lifestyle statement. Americans eat on the run and rarely sit down as families. In America, food is all cult and no ritual.

The selective New England boarding schools my children attend are an example of the paradox. Sit-down meals in which students dressed up, waited tables, and were assigned seating with faculty and staff, were once essential parts of the educational experience. (In fact my Italian-born son chose his school over its competitors precisely because the sit-down meal was still important.) Now, the custom is under constant attack, either because it is considered elitist or perceived as subtracting time from “more valuable” activities quantifiable on college applications.

Any Italian would tell you this is a no-brainer! If students sat down and ate with consideration, they would in turn become more aware of the environmental impact of their food. If they ate together instead of clicking on Facebook, they would forge deeper ties. If they had a pausa pranzo, their refreshed brains and spirits would help them meet the demands of a busy day.

And as they share food and talk, they might reflect on how much of their intellectual and spiritual culture and education — Plato’s “Symposium” and The Last Supper — began with meals.