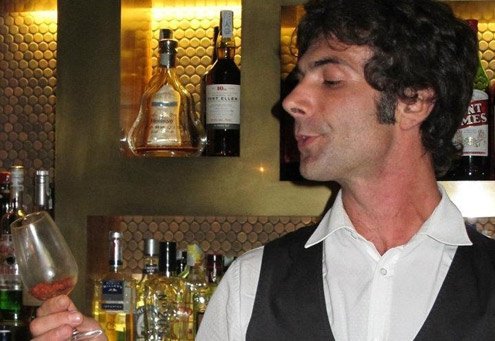 ixology, the art of mixing drinks, is an American staple. Not so in Italy, where people drink an average of 70 liters of wine per year. Aside from hotel bars, cocktail culture has been slow to catch on. But there’s been some modest progress.

Rome’s acclaimed Pierluigi Restaurant — disclaimer: I work there on lunch shifts — recently remodeled both its kitchen and dining room and reopened with among the city’s best-stocked bars. Am I biased? Maybe.

That’s why I decided to leave most of the cocktail talk to the restaurant’s new head bartender, Gabriele Guidoni. Guidoni worked in New York City and London before deciding to showcase his skills at home.

I sat down with him recently to get his view of the cocktail scene in Italy and abroad. It took a little prodding, since bartenders covet their secrets. Here are some excerpts from our chat.

Where did you first work?

A huge club. Very focused on American-style bar tending. We served lots of long islands, mojitos, and piña coladas, stuff like that. That’s how I started.

You’ve gotten a little more serious since then.

You could say that.

So what happened after the nightclub?

I came to Rome and worked in a few different places, Supper Club was one of them. I was working with these two bartenders, one an old friend from home, the guys who run the Jerry Thomas Project now. I guess you could say we “grew up” together. But then I went to New York for the first time [in 2004] and that changed everything.

In Rome we were so focused on flair, trying to show off with every drink we made. But when I got to New York and was trying to be fancy, throwing bottles around, lighting things on fire, everyone just stared at me waiting for their drinks. People wanted drinks made well and they wanted them fast, they didn’t care about the flair.

When I got back to Rome I brought the first real cocktail book I’d ever seen in Italy with me and that, along with my time in New York, got me thinking it was time to move away from the showmanship and get back to what really mattered, the relationship with the customer. And also to look more closely at ingredients – bartenders making their own syrups, using fresh fruits and vegetables, infusing their own alcohols.

But it’s nothing new. It all happened 200 years ago with Jerry Thomas. He had to make his own ingredients because they didn’t exist. [Editor’s note: New York bartender Jeremiah (Jerry) Thomas (1830-1885) pioneered cocktails across the United States.]

Why are we only rediscovering what he did now? How did we lose it all?

It takes too much time. Jerry Thomas started as a coal miner, but he wanted to make money. He was impressed by how bartenders dressed and thought he could do what they did. His only goal was to impress people and make money. If he could buy all the ingredients he used he probably would have, but they weren’t available so he had to produce them himself. And he did succeed. He made a lot of money.

But he didn’t train anybody?

No, not at all, he just cared about making money. There was nobody else like him in his time. He was the best and after him there was really no one else.

Tell me more about the speakeasy in Rome and the guys who work there.

It’s a similar idea to lots of places that have opened in New York and London over the past decade. They’re only open late at night, usually starting around 10 p.m., and there’s a password to get in each night. And the guys who work there really know what they’re doing. They would make a killing in New York.

No, the problem is they’re in Rome. The drinking culture is so different. For people going out the focus is never on what they’re drinking. It’s on music, entertainment, girls, and so on. Not cocktails.

So the mixology scene that’s exploding in the U.S. and UK won’t take hold here?

No, there’s no chance to expand here. Cocktails just aren’t part of the culture. Thanks to London-style bartending it’s improved a little bit, but not much. And I don’t like the term mixologist anyway.

What do you mean?

Focusing on mixology as a science doesn’t make any sense. You lose the relationship between the bartender and the customer, which is what really matters at the end of the day. When a guy gets off after a long day at work and sits down at a bar he doesn’t want someone to take eight minutes to make some complicated concoction and never look him in the face. After a long day, a laugh and a chilled Martini are better than a complicated concoction and no human interaction.

The idea of the “piano man” behind the bar…

Exactly, it used to be a lot more fun. If a customer leaves the bar smiling at me, for the drink, or whatever reason, I’ve reached my goal. For me a mixologist is the guy who never says a word to the customer sitting across the bar. I’d much rather be called a bartender.

The problem all over today is this focus on complicated techniques. The focus of modern mixologist is on the balance of the ingredients, but they’ve lost the more important balance, with the customer.

Tell me about your favorite drink.

You can’t beat a well-chilled Martini, but after that I really like the Americano, especially for an aperitivo.

To drink or to make?

Both actually. The Americano dates back to the 1860’s, probably in Milan, you never really know with these stories. It was originally called a Milano-Torino because it’s ingredients, came from Milan — Campari — and Turin — Carpano Antica Formula sweet vermouth. The drink’s name changed when Americans in Italy during Prohibition ordered it so much that bartenders started calling it after

them. It’s traditionally served over ice with a club soda.

(As he made me his version of the drink) Clearly what you’re making right now is not the original version.

No not exactly. A few years ago I came up with my own. Three or four years ago I was really into the scientific side of mixology and was experimenting with a lot of foams and gels. I’ve moved away from them, but I think a few are still worth it from time to time.

Because I like Martinis I thought to serve the Americano up like a Martini. And rather than dull the flavors by adding soda water I wanted something that would complement them. Serving it up you lose the ice so I needed something to give it texture as well. So I thought foam would work well.

One day I had some grapefruit juice sitting around and tried some in a regular Americano and really liked the flavor. The first foam was pretty simple — pink grapefruit juice, vermouth, sugar and egg white. My current version has fresh ginger because I really like the combination with grapefruit and I use black

peppercorns in the syrup for an extra layer.

Any recommendations for a simpler drink we could try at home?

You know the Tommy’s Margarita is a pretty simple one. They key is using agave syrup, which is natural because it’s the same thing tequila is made from so it makes more sense than sugar actually.