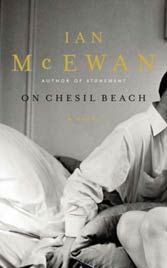 Sometimes, when McEwen relaxes from his great ambition, that of getting the world and all its clumsy moments just right, an old friend steps out to greet him, his gift, which is a goodness of heart. Working class Edward (from Henley) and upscale Florence (Oxford) are young (22), virginal, and in love. It is 1960. He likes John Mayall (at the expense of The Beatles); a violinist, she forms a quartet to burrow into the literature of classical complexities.

Sexually, they are untouchable to each other (his tongue, to her, is an “alien muscle”). McEwen’s conceit is to set the novel on their wedding night, when consummation is expected — postponed but urgent to Edward, feared and loathed by self-hating Florence (she does not wish to be “uncomplainingly knifed”).

She senses “the hidden gloom of his unfulfilment, looming like an alp,” he adores her but is “nauseous with desire and indecision.” As happens often in McEwen’s work, misunderstanding presages greater undoing. But in this case, the collapse, such as it is, possesses an intrinsic nobility: McEwen uses sexual limitations to bare an era that often dispensed with pre-coital candor, or left it until too late.

Differences in musical tastes and class lurk on the periphery. Ultimately, though, this a tenderly pitched musing about how imperfect choices come into view only once, after which there is just regret.