On art and Elders 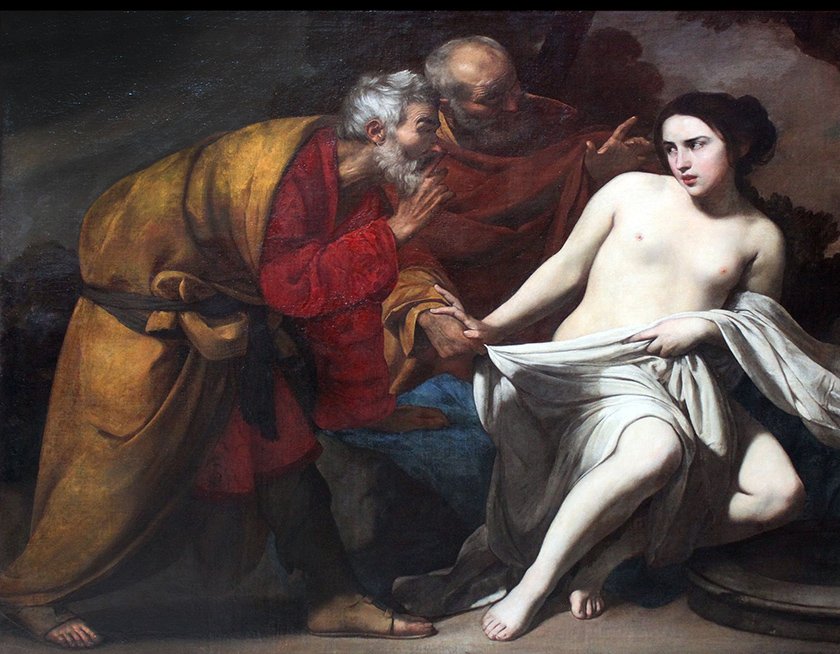 "Susannah and the Elders" by Massimo Stanzione, a 17th-century Naples painter.
S

ome years ago, President Barack Obama ruffled feathers when he used art history as an example of an unproductive — or at least unremunerative — academic credential.

My B.A. and M.A. degrees in art history never did much for me financially, so I know what Obama was trying to say.

It’s no secret an art historian’s usual career choices pay abysmally, whether working as a museum curator, teaching a new generation of penurious art historians or helping the rich ennoble their homes with art.

But poor pay doesn’t make art history useless, even if it can seem that way at times. One reason the field seems irrelevant (or even useless) is that the visual vocabulary used in the Old Masters we study today is a visual language as remote as Latin. Before widespread literacy, Greek and Roman myths or stories from the Judeo-Christian tradition were a widely-understood shorthand that could transmit complex ideas or a simple moral to viewers without formal education.

I thought about Susanna when I saw Rudolph Giuliani fumbling in his pants in front of a young actress.

Like Latin words in use today, some messages are still understood, like the message about foolish ambition and flying too high and too close to the sun in Pieter Bruegel the Elder’s “Landscape with the Fall of Icarus.” But many more stories and their messages have been forgotten. Without art historians, we might have no idea what pictures of the Circumcision (Christ’s) or Judith and Holofernes or the rape of the Sabine women mean. This is too bad, for these fusty old images still have a lot to say. For example, the French painter Jacques-Louis David’s immense illustration of an incident in which men in ancient Rome violated the women who belonged to the neighboring Sabine tribe is a commentary on both the civil strife produced by the French Revolution and on filial love. David’s lesson about ancient Roman inter-tribal violence still resonates, even if America’s red and blue tribes don’t steal each other’s women — yet.

One frequently-depicted story came to mind the other day. I couldn’t help thinking of painted versions of the legend of Susanna and the Elders when I saw images of Rudolph Giuliani fumbling in his pants in front of a young actress.

The story of Susanna comes from the Book of Daniel. A pair of aged voyeurs watch while Susanna, a beautiful young wife, is bathing. On her way home, Susanna is accosted by the lust-filled old men, who threaten her. If she does not have sex with them, they say they will spread the rumor they caught her with a lover. Susanna refuses and is tried on trumped up charges of adultery, which carries the death penalty. The prophet Daniel interrupts the trial, which he says will cause the death of an innocent. When the old men are questioned separately, their versions of what occurred do not match and their falsehood is revealed. Susanna is vindicated.

Over centuries, artists as varied as Picasso and Rubens have made Susanna’s story a popular image. Not least because it provided a religious excuse for showing a luscious nude in a lovely setting, usually a garden or ornate marble bath. The contrast between the ugly old men and Susanna provided fertile ground for artists to create dynamic visual contrasts between the menacing colors and forms of the men and the gleaming and sensuous Susanna.

Some versions emphasize other aspects of the story. They don’t show Susanna at all and focus instead on the trial or the bathing scene. The messages were good, justice triumphing over wickedness or innocence repelling corruption.

Images of Susanna encapsulate the male belief that a woman going about her daily business is extending a sexual invitation to them.

Compositional choices add other nuances. Artemisia Gentileschi, a rare female artist who treated the story in the 16th century, broke with tradition when she depicted the old men bearing down on Susanna from a wall above rather than peeking from behind a tree or pillar. Their dominant position underlined their power and dominance over a young woman.

No amount of words comment on news stories about Rudy Giuliani, and Harvey Weinstein, and Evangelist Jerry Falwell Jr. as effectively as images of Susanna, and not just because of the stomach-churning visual contrast between the ugly old men and the beautiful young woman. Images of Susanna perfectly encapsulate the male belief that a woman going about her daily business, taking a bath or looking for a job, is also extending a sexual invitation to them. And I can’t think of a better way to sum up how the Elders, Rudy, Harvey, or Jerry use their power to grab what they could never get in a “fair” sexual competition. Without coercion, Susanna would choose her younger, more attractive husband, as would any modern young woman.

You could get depressed thinking about how repetitive this apt old story is. But it has another message. And that is that the old men get their comeuppance, even in ancient patriarchal societies.

The kind of Old Master paintings that depicted stories such as that of Susanna and the Elders were once considered the pinnacle of art. In the last 50 years Old Masters have trailed the market. Today, non-representational abstract works and message-less Impressionist landscapes and still-lifes fetch the big money. Should we be surprised that today’s collectors — mostly wealthy and powerful older men — don’t want to own pictures of uncomfortable truths?