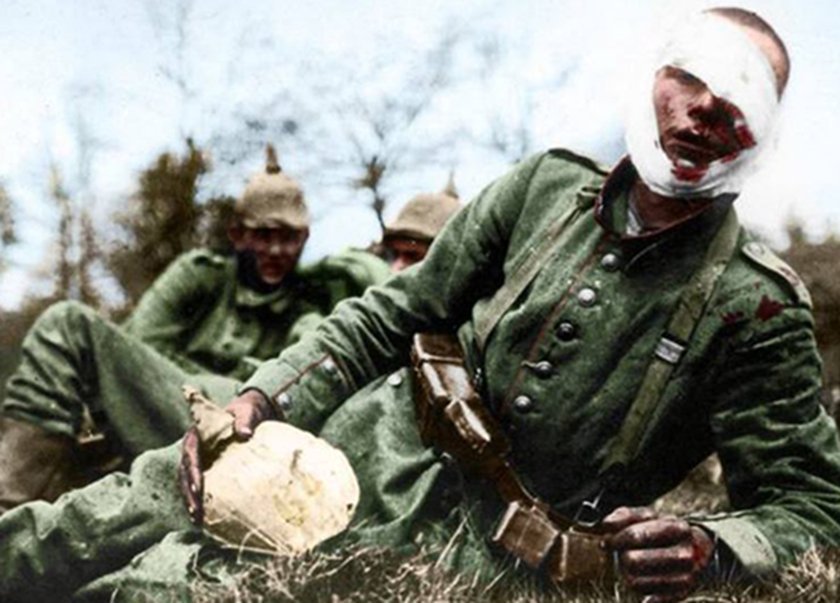 n Armistice Day, the Philharmonic will play, but the songs we sing will be sad. • From American singer and songwriter Paul Simon’s song “Armistice Day.”

Geographically, I am not close to where France, the United Kingdom, and Germany signed the Armistice formalizing the end of World War I, 103 years ago. They signed the agreement in a train wagon at the railway station of Rethondes, located in the Oise department, which is further north than Normandy, where I live.

But geographical constraints mean nothing on a commemoration day as timeless as this one.

On Armistice Day there are rituals. A few hours before Emmanuel Macron begins the minute of silence at eleven o’clock on Paris’ Champs-Élysées, I sit in my parents’ bedroom, in my red wool sweater — red like the color of the poppies, which are emblematic of war remembrance in England, where my stepfather is from. My laptop is in my hands, and my eyes scan news items detailing some of the traditions that belong to this day. I am looking for something to enhance my sympathy for the fallen. My fingers fall upon the keyboard to type in a piece entitled La Chanson de Craonne; as I click on the YouTube video for the song and waltzing strains of accordion begin to grace the room, I explain to my parents the significance of this song which I, in turn, learned years ago from my middle school music teacher, one of my mentors.

In 1917, French forces under the direction of General Robert Nivelle experienced an overwhelming blow — yet another blow too many — in what had been conceived as a military offensive against the German army. The battle took place at Chemin des Dames in the Central-Eastern department of Aisne, and the number of casualties was estimated to be 271,000 French men and 163,000 Germans, with many more reported missing in action.

But we can hear the song now; I hear it between water for the morning tea boiling in the kettle and the mayor’s announcement.

Mutiny arose, and no small one: rebellion sparked in 68 of the 110 French divisions, and was strengthened by the adoption of a song that took its new name, “Craonne,” after a Northern village which had suffered through one of the butcheries making up this series of offensives. There was nothing new about the melody — it had previously been sung in reference to battles such as Lorraine in 1914-15, Champagne in 1915, and the unspeakable carnage of Verdun in 1916. But the new words found by the poilus (the name given to French soldiers of the First World War as they were hairy and unshaven due to life in the trenches) cause my conscience to shudder:

To all of the women,

This infamous war is over now, for good.

We must leave our skin

On the field of Craonne,

For we are all condemned

The fact that this is a protest song is undeniable; it’s not so much Jimi Hendrix mimicking the screams of bombs over Vietnamese villages with his Stratocaster, though, as it is a French soldier addressing the vitriol of his countrymen against the boundless slaughter they were experiencing, singing to those at the top, the masters of war:

“Fat cats, it’ll be your turn

To go onto the battlefield,

If you want war,

Pay for it with your own skin.”

The song was censored until 1974, and the authors remain unknown. One thing was sure, though: this was not a positive image of the French soldiers’ morale. The situation was eventually “rectified” by the arrival of General (later Maréchal) Philippe Pétain, who was responsible for improvements in food and shelter, not to mention the execution of 556 soldiers linked to the mutiny, and his wholehearted collaboration with Nazi Germany during the Vichy Regime between 1940 and 1943.

But we can hear the song now, and I hear it between water for the morning tea boiling in the kettle, the mayor announcing the beginning of the yearly cross-country race in the neighboring village, and the church cemeteries where veterans speak the names of the fallen and priests reply softly: morts pour la France.

What I am doing is adding my harmony.