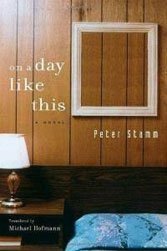 By Peter Stamm, translated from the German by Michael Hofman

Andreas is an unmarried Swiss schoolteacher in his mid-40s who has lived and worked in Paris for nearly 20 years while going about the repetitive calisthenics of his “formless” life. His mother and father are dead. He’s callously estranged from his brother Walter. He cares little for his lovers and drifts through his day-to-day haunted by the idealized memory of Fabienne, a girl he adored in adolescence. But when a persistent cough yields potentially malignant news, Andreas flees the diagnoses, snaps up a carefree office assistant named Delphine, and drives his 2CV back to his home village, where now-married Fabienne still lives. Like an animal, he’s off to die, “running away from the disease that was his life.” It’s not drama but instinct, a last trip to youth’s backyard.

Astute and austere, Stamm is a caring existentialist for the 21st century. The lives of his “modest” but aloof characters, including naïve Andreas, are the sum of mundane lives whose intersections produce ephemeral purpose. Life is a “hackneyed” stupor. Finally kissing Fabienne, the girl — now woman — of his unrequited dreams, Andreas feels only “jaunty indifference.”

For Stamm, passion is inconclusive, destiny an illusion, and life’s import a trick of human tomfoolery. For Andreas, the “total insignificance” that comes with love represents “complete freedom.” He’s eager to believe in chance alone: “His birth, any birth, was the last in an endless row of coincidences. Only death was no coincidence.”

Only when memory relinquishes its blinding sentimental hold — Fabienne made irrelevant — does the prospect of death become tangible, leading man-child Andreas to seek refuge from the “menacingly empty landscape” of his own creation. The man who had been “careful not to be loved to much” finally makes a choice.