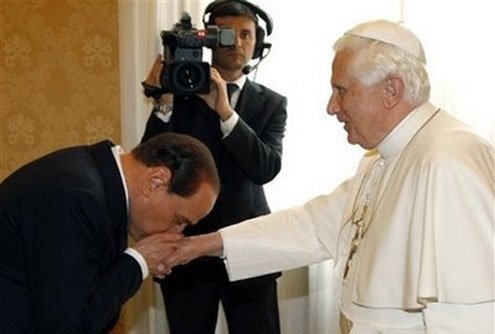 Italy and the Vatican: A still-cozy relationship.
I

t sometimes surprises Americans to learn that “secular” Europe isn’t as secular as it might seem. It has less to do with Italians attending church on Sunday (which they do in ever-fewer numbers) than just how pervasively the state ensures Europe’s religious infrastructure. Europe has no American-style church-state separation. Even two of the world’s most secular nations — Denmark and Sweden — have state-funded churches.

Italy gave up Roman Catholicism as its official state religion in 1984. In its place came the obligatory “8 per mille” (eight one-thousand) religious tax, which permits the state to apply .8 percent of all taxable earnings to charitable religious works.

But the “8 per mille” concept so bewilders taxpayers that most don’t even bother choosing who gets their “donations.” In a recent poll conducted by Occhiopermille, a website created by the Italian Union of Rationalist Atheists and Agnostics (UAAR), 60.4 percent of a sample of 2,000 people said they simply ignored the question of where the money should go. Another 4.07 percent choose the state, while 34.56 percent indicated the Catholic Church. This in a country that’s often labeled “95 percent Catholic.”

At first glance the “8 per mille” sounds reasonable, even fair. Eight one-thousands of what you earn is a pretty small amount of money, right? And you get to choose your confession (if you have one), right?

Well, yes and no.

The form is friendly if you’re Jewish, Waldensian, Adventist, Catholic, Lutheran or a member of the Assemblies of God. But what if you’re Muslim, Hindu, Buddhist, Methodist, Wiccan or one of thousands of other religious confessions? None of these religions are represented on tax forms. They can’t receive your money (at least not your tax money.)

What if you happen to be an atheist, agnostic, or simply don’t want to participate in tax structure dedicated to supporting religion? You can give your money to the state. But based on UAAR polling figures only about four percent of Italians actually choose that option (just as well, since the state turns funnels a part these earnings to none other than the Catholic Church). The 60 percent who stand pat probably do so because they have no idea what they’re expected to do or why it matters. The Italian state is notoriously corrupt, which doesn’t make contributing to it particularly appealing.

So what happens if you don’t choose? The state distributes the income in proportion to the percentage of people who actively choose a specific confession. That works out to roughly 87 percent for the Catholic Church, 10 percent for the state, and about three percent split by the other five confessions allowed to partake. In essence, the Catholic Church ends up with the lion’s share of the money, about €1 billion a year — even when most people don’t explicitly want them to have it.

It’s an elegant system, at least in the way viruses may be said to be “elegant.”

But how does the Catholic Church spend the money? On the poor and needy, surely? As Raffaele Carcano writes, in the magazine L’Ateo:

“The billion euro that the Church obtains thanks to the 8 per mille is destined for things like the salaries of priests, the building of new churches, etc. for which the state already provides financial help. Nonetheless, the annual report of the CEI (Italian Episcopal Conference) is succinct, opaque and doesn’t mention the enormous amount spent on the relentless ad campaigns… misleading ads, focused as they are exclusively on charity and relief in developing countries, on which only a fifth of the received funds is spent.”

“The picture is so negative that the UAAR has no choice but to intensify its information campaign… the 8 per mille is an authentic calamity for non-believers…who have to pay to explain a mechanism that discriminates against them in every way.”

For the skeptical UAAR, the discrimination consists in citizens being forced to finance a religion that is not theirs, which they do not want, and which discriminates against them at every opportunity.

As bleak as this reality may be, the website Concordat Watch suggests that the situation in Germany isn’t much better:

“In Germany church and state are interwoven such that the sacrament of baptism automatically places you in a tax category. That ceremony can oblige you later on to pay taxes to the church and force your employer to withhold church tax prepayments from your income. In 2010 this brought the German churches €4.794 billion. The only way to end this is to formally leave the church.”

In Switzerland “church tax is levied by each canton for the religious groups it recognizes. And it’s not just people who have to pay. In 18 of the 26 cantons firms must also subsidize the churches, even though they’ve never been baptized and they can’t leave the church. This is now being challenged by a computer specialist who belongs to no church himself, but must still pay church tax for his one-man company. In September 2010 the Swiss Supreme Court ruled that [the law] was constitutional and now he is taking his complaint before the European Court of Human Rights.”

Given the European court’s March ruling that the presence of crucifixes in Italian schools was perfectly consonant with secular principles and didn’t violate the European Convention on Human Rights, I wouldn’t get my hopes up that legal challenges are going to get very far any time soon.