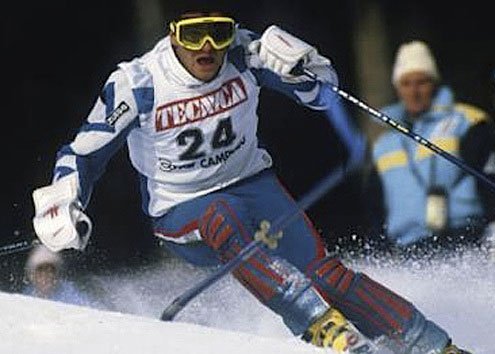 he pre-Winter Olympics have tripped over a damning word: Indifference.

Why, some ask, doesn’t Italy seem to care? After all, it sought the Games.

Those seeking an answer among the 10,000-strong media corps now housed Turin might want to examine three telling categories.

Italy has none in winter sports. For much of the 1970s, 80s and 90s, fans could rally around a few mavericks. Skiers Gustavo Thoeni and Piero Gros were alpine aces in the 1970s, winning on the World Cup circuit and at the Olympics. When they faded, Alberto Tomba jumped in — gregariously monopolizing a decade (between winning, not-winning, and dating; Katerina Witt included). He had help, with Deborah Compagnoni forging a reputation as Tomba’s female counterpart and conscience. Even compact downhill specialist Kristian Ghedina got into the act. He won 12 downhills, finishing a creditable sixth in Nagano. The fierce, occasionally petulant rivalry between cross country skiers Manuela Di Centa and Stefania Belmondo — one a raven-haired brunette, the other blonde, petite (and perennially second to Di Centa) — also received gossipy attention. Both won Olympic gold medals. Armin Zoeggeler’s luge skills came to the forefront more gradually, though the sport’s appeal is admittedly limited. The absence of identifiable heroes (or characters expected to display heroic characteristics) removes European national friction from the competition. Tomba and Compagnoni had to fended off a variety of European adversaries, particularly from Austria and Switzerland. Belmondo and Di Cento were matched against Russians and Norwegians. Challengers became as identifiable as heroes — their foibles studied — and the tension galvanized attention. Though Italy has a strong slalom skier in Giorgio Rocca, he is soft-spoken, has underachieved over the years, and is in the twilight of his career. In ice skating, Barbara Fusar Poli and Maurizio Margaglio won the ice dancing gold medal at the 2001 world championships, but were never again able to find similar form. Overall, it’s a dull tableau. Secondarily, winter sports (apart from skiing) are, at least to some, esoteric and remote. Moreover, the soccer World Cup is only four months away.

Soccer is Italy’s winter sport. January through April are crucial months in the soccer title race, currently monopolized by Juventus, the leading Turin team. Some Italian fans have little love for Juventus or Turin, considering the team a sacred cow and the city richly aloof from the daily concerns of less privileged Italians. The competition among the top three teams in Italy, Juventus, AC Milan, and Inter Milan, is fierce. Even cities with less dynamic teams, including Rome and Florence, are no less rabid about the fates of their team, with daily talk shows chewing up hours of time. Winter sports — a distraction at best — have little impact on this rock hard soccer base. The summer Games, meanwhile, are held when soccer is out of season and has an inviting soccer tournament of its own. Unlike the United States, which for years was locked in a game of Cold War one-upmanship, sports nationalism shows itself infrequently in Italy. When it does, the World Cup, not to the Olympics, is its traditional outlet. And the Cup (this year in Germany) is only three months off. Some fans are literally storing up energy. Many will travel to Germany. After all, it’s been eight years since the event was played in Europe.

The economy and the elections

Italy is struggling economically and holds a general election in two months; April 9 is the official date. The campaign has already begun, with conservative Prime Minister Silvio Berlusconi repeatedly lambasting opponents on national television. This is high-torque drama, even for skeptics. Berlusconi, his own favorite hero, is a dominating television presence. His me-first antics provoke intense debate even among those who profess no particular political allegiance. The Winter Games come as the last act of the current Berlusconi terms plays out. Since Turin and its region is not Berlusconi territory (it tends to vote for the center-left or the north nationalist Lega Nord), he has no political reason to stake it out more than briefly. The debt-ridden Rome government has repeatedly slashed the Olympic budget, demoralizing organizers and creating an open (if controlled) rift between Rome and Turin. Turin is a provincial city. Its weight once lay in the presence of the Agnelli dynasty, which runs Fiat and Ferrari. But since the death of Giovanni Agnelli and his brother Umberto the dynasty has been adrift, its losses growing and its future in question. In automobile racing, the five-year Ferrari run atop the Formula One world ended abrupt last year and its leading driver, seven-time champion Michael Schumacher, is now 37 and past his prime. In general term, success seems to have drained from Turin.

Italy can be conformist, but it also can walk away from fads. The Olympics, billed as a must-see event by the network covering it, NBC, has brought about a subtle form of laissez faire — Italian-style. The more non-Italians insist they do not understand why Italy is not taking full advantage of an obvious public relations opportunity, the more some Italians sense the opportunity itself is forced and withdraw from it as something not of their making (though it’s on their soil). Italian President Carlo Azeglio Ciampi recognized this recently when he reminded Italians that world attention would be riveted on the country for two weeks, calling for “national responsibility.” The appeal, while not unusual, hinted at urgency. He singled out the Piedmont region, where Turin is located. But the people of the Piedmont are remote from the Olympic slogan, “Passion lives here.” Instead, they are notoriously collected, industrious, and unemotional, not given to exaggerated show. Such behavior contrasts notable with South Italy, and with Rome in particular, again demonstrating that Italy, while united, is still imperfectly glued together.