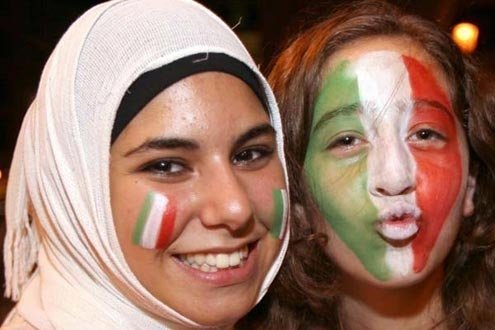 Italo-Moroccan fans in Milan during the European Championships in 2012.
A

s a child I hated traveling. My parents would sit in the front seat of our rental car (a steel trap to me) arguing and pointing in all directions, leaving me in the back seat to dramatically fear we’d be lost forever. I never liked it that home, New York, felt so far away. Family trips around Ireland or swerving along the curves of the Amalfi Coast awed me less than they transformed me into a desperate girl clicking her heels three times repeating, “There’s no place like home.”

I was comfortable with my childhood antics and my small yet familiar world. While some see New York as intense and unsettling, my concrete jungle made me happy.

Then I found Rome.

I was 18 and on vacation. I wanted to explore. I hoped to meet locals and experience the genuine side of the city that tourists always miss. One evening, I stumbled into a quaint restaurant on a side street along the Piazza Navona. My young waiter had an ethnically ambiguous look, dark handsome features, caramel skin and translucent green eyes. My New Yorker senses assumed an either Puerto Rican or Dominican background; but this was Italy, so he clearly must have been southern Italian, right? Spanish? Greek?

Exchanging looks soon turned into exchanging names, and then phone numbers, and then kisses. I quickly learned that my “Italian” waiter was an immigrant from Morocco. He introduced himself as Said (sigh-eed) from Casablanca.

Four years have passed since that first meeting. Since then, Said and I have entered into a long distance relationship with much back and forth between Italy and the U.S. For me, the back-and-forth might be seen as an extended Roman holiday. But Said’s day-to-day realities are far less romantic.

When I’m in Rome, I typically spend all my time with Said and his Moroccan friends. They struggle with Italy’s lack of diversity. Moroccans tend to be an invisible minority in Rome. The Bangladeshi flower peddlers and Senegalese street vendors are more commonly and easily recognized.

Moroccans exist mostly behind the scenes, often indistinguishable and diligent; they are waiters, barmen, and handymen, the ones making crepes in winter and scooping gelato in summer.

Being able to pass as Italians or Southern Europeans, lighter skinned Moroccans can focus on language as a way of assimilating into Italian culture. The result cuts both ways. In north Italy, marocchino has long been a synonym for servant or hired hand. According to official figures from 2010, some 450,000 Moroccans live in Italy. However, many Moroccan immigrants come to Italy to find work, not practice Italian.

I envy Said’s capacity for language, embarrassed by my own limitation to English alone. Fluent in Arabic, French, Italian and English, Said is a walking “Rosetta Stone CD.” Language, I know, is an essential part of his effort to fit in.

As much as I might strive to be seen as more local, I remain an American with no family links to Italy. I am automatically considered a tourist, even though I have slowly come to feel more at home (though how you feel and how people see you rarely balance out).

Being the token American girl was amusing for a while. Hearing Ciao Bella and Che Bionda! is flattering the first time you hear it, but by your 10th trip you crave less attention, not more. In an effort to establish credibility I anxiously practice my Italian with anyone patient enough to listen. The stereotypes and social behavior Romans typically associate with and expect from Americans — sloppy drinkers or moneybags — I challenge and avoid. I make to always introduce myself first as a New Yorker.

At home with Said, the two of us and a few friends gather around the plastic table in the kitchen. With our large clay tarjine in the middle, we sit in the dim lighting amid cigarette smoke. Breadcrumbs thinly layer the top of the table. We drink blood red orange juice. Conversation consists of coyote-like laughter in Arabic or Moroccan dialect. A story is told. There are grand hand gestures and physical demonstrations, with facial expressions that range from puzzled confusion to confident agreement.

When the story is finished, the group settles back, arms crossed, with smiles of approval and satisfaction. It is then that I gently lean in to ask Said what the group was talking about. He looks over at me and says, “My childhood.”

We are not so different after all.

About the Author: Sophia Heydebrand