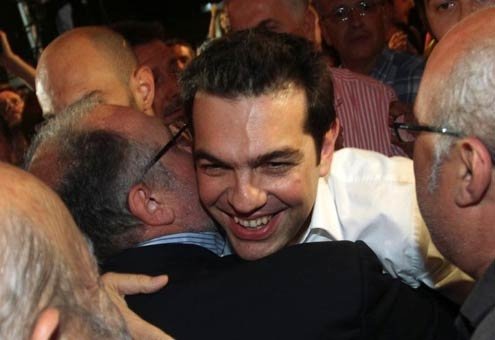 Alexis Tsipras: The Coalition of the Radical Left, SYRIZA, is now a leading Greek force.
T

he stubborn, charismatic leader of Greece’s anti-austerity left is a man named Alexis Tsipras. His political alignment, the Coalition of the Radical Left, or SYRIZA, topped the polls in recent elections and stands poised to do the same in June. His position is more like that of a high-stakes gambler than a leftist proselytizer: Europe and its banks are holding Greece hostage, he says, with the Greek workingman in the slash-and-burn crosshairs. A bailout will send his country to Hell.

But let’s put all that aside for a minute. Who is Tsipras?

He’s a former Communist Party youth leader who rose through the ranks of that once-powerful party, changing stripes as the post-1989 world demanded. He’s also a civil engineer by training. Unmarried, he lives with his partner and their son. The English-speaking Tsipris is 38.

Tsipris’ age matters because he represents what in Italy remains an aberration, a major political player under age 60.

A recent Italian study established the average median age of the incumbent Italian government as 64. The number for university professors was a year younger, 63 (by far the oldest average in Europe), while Italian bank managers (and Catholic bishops) stood at 67. Not a single major Italian profession had a managerial class with an average age between 40 and 50, let alone younger.

On the political and business side, Mario Monti is 69, Silvio Berlusconi 75, Giorgio Napolitano 86, Romano Prodi 73, Luca di Montezemolo 64, Pier Luigi Bersani 61. Since the 2001, only three candidates under age 30 have been elected to parliament (of more than 2,500 up for office), though 28 percent of the Italian electorate is now between ages 25 and 29.

Put in Italian terms, Tsipris’ rise through the ranks of Greek politics would be tantamount to witnessing the ambitious mayor of Florence, Matteo Renzi, leapfrog the old guard and reach the top rung of the Italian Democratic Party (a renamed Communist heir now run by the uninspiring Bersani).

Renzo is the 37-year-old lawyer and a married father of three who is widely considered Italy’s most popular mayor, at least by foreign media. “We need to send a whole generation of politicians into retirement,” he told the Guardian in a 2011 interview, “and I am just one of many demanding we turn a page.”

But when the same paper asked Roberto D’Alimonti about Renzo’s short-term political chances, the 65-year-old university professor and mainstream columnist offered a typically guarded, old school reply: “If he can use Florence to get a bit more experience, he will be ready. Now is still too soon.”

In Italy, which suffers a near-physiological resistance to rejuvenation, now is always too soon.

The country’s sixty-something ruling class still associates youth with a 1960s landscape overflowing with incipient radicals and untamed ideologues that, if given latitude, could steal jobs from their sinecure-happy elders and, riskier still, demand cleansing change. Whether in academia or politics, Italian youth must first be tamed and trained into institutional fealty whose ponderous rhythms mimic the intellectual slow motion long built into the Roman Catholic Church. Age is proof of conformity.

By 50, most men (women hardly exist on the Italian leadership scene) know that big-idea talk is mere rhetorical foreplay, after which come institutional compromises. Big-idea dreaming is mocked because it contains an ingredient of optimism that monarchic veterans exclude or trivialize, or both. Cynicism, or excitement by complaint, is Italy’s “reverse dream,” since its populist catch phrases attract voters but its spirit can later be abrogated, fulfilling underlying “I told you so” skepticism.

Unlike stricken Greece, Italy still nourishes a strong middle class that continues swearing by an opportunistic culture in which delay assists with latitude and leverage (even Mussolini, with his on-time trains dogma, acknowledged the shortcoming). Dues paying doesn’t begin until around age 40, which means figures like Florence’s Renzo, absent Greek-like crises, are held back for at least a decade. Two Italian Democratic Party figures and former Rome mayors, Francesco Rutelli and Walter Veltroni, each showed promise in their mayoral years, but shriveled quickly on the national scene, victims of party sniping and personal venality.

Most telling about Italy’s age statistics isn’t so much the political average but the educational one. Adrenalin-fueled teens and twenty-somethings at the impressionable mercy of elderly university teachers are often left to cleave to the built-in jadedness of instructors who long ago resigned themselves to an unchanging status quo. Embracing the potentially transformative power of youthful energy and intellect is seen as useless.

Jurassic Italy may well require Greek-like dire straits to yield a Tspris. Instead of a near-70-year-old prime minister begging vast clusters of unemployed youth to avoid pessimism, it urgently needs a far younger and vibrant leader in the flesh. If only urgency still had meaning.