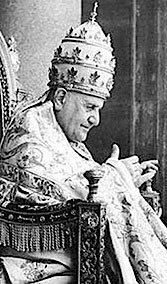 uch will be written in the coming days about Pope John Paul II’s possible successor. Names and indiscretions will proliferate. There is, however, only one certainty: The next pope will not be an energetic, 58-year-old in the prime of his life.

The real boldness, however, lay in picking a cardinal a decade younger than the accepted papal qualifying age, which is to say over 65.

The length of John Paul’s papacy justifies previous hesitations. The church sought to avoid and FDR-style papacy, a spiritual dictatorship.

None of this is said to diminish Wojtyla remarkable papacy. The stern dynamism of his early years transformed and invigorated a flagging church. He was in fact an agent of transformational times.

His final decade was another matter. Ill-health is subversive. The more the Vatican insisted that the pontiff remained lucidly in charge, the more the assertion rang forced, even false.

I traveled with the pope to Mexico and the United States in January 1999. His answers were slow, his diction marred, his reasoning in responding to pointed queries delayed. Was the pope strictly speaking in control of his mental faculties? Yes. Barely.

These recollections lead me to think the College of Cardinals will select an older figure, very likely a Spanish-speaker, to establish the post-Wojtyla era. Cardinals, while guided ostensibly by the hand and will of God, are nonetheless princes and subject to vanity.

Many important cardinals, papal aspirants, have aged and died as Wojtyla endured. This will not be forgotten. Even the church is a competitive institution whose leadership is based on internal political alliances.

The United States ratified the 22nd Amendment in 1951 to a avoid a repetition of FDR’s four consecutive Depression-era terms, labeled by some as a personality cult. Congress didn’t like the prospect of an American king — an above-politics magnet. It also envied such established popularity.

Vatican envy, disguised by fraternally compassionate double-speak, flourishes behind smiles. The Vatican is a corporation. Wojtyla’s endurance, lately manipulated for advantage, was not always appreciated by insiders as the perfection of Christian suffering. For some, his strength was the vanity of an old man.

Wojtyla’s suffering will be canonized. He is Christendom’s first celebrity-age spiritual Elvis. But when the dust settles, the cardinals will reflect on what they’ve just seen: a four-decade papacy of near personality-cult dimensions, pushed beyond its natural limit by modern medicine.

Pope John XIII (mentor of Vatican II) was elected at 76, an interceding figure to give Milan’s Cardinal Montini (Pope Paul VI) a chance to enter his requisite 60s. Expect the next conclave to pick a pope who can rule authoritatively, but for a decade, not three. Expect a figure who can help the church maintain its position among its most numerous constituency, the poor; expect a push from Italian prelates to reacquire the papacy. Do not expect a dynamo who is younger than his years. Do not expect a Wojtyla, who had world enough and time.