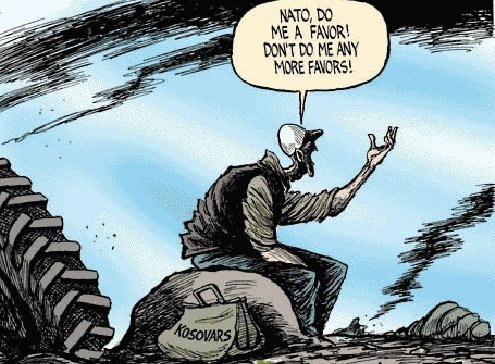 nee-jerk intervention in the civil wars of others is rarely a good idea. It usually does more harm than good and risks producing a wave of lethal ripple effects set in motion by those who perceive so-called righteous intervention as the most cowardly form of bullying, particularly if comes from some untouchable above.

The United States, using United Nations indignation as a lubricant, entered the Korean blood feud in 1951 and left under the cover of stalemate three years later. Exactly what it sought to avoid — a China-supported Communist north — came to pass, and the two countries were hopelessly divided, as they remain today. In all, some 2.5 million civilians died. The U.S. lost more than 36,000 troops.

A decade later, the U.S. again moved into Asia, this time favoring the southern side of a fractured country, Vietnam, against its Communist-inclined but highly nationalist north.

The intervention, which followed a French retreat (and began as a punitive action following an attack on a Navy ship), was rationalized as an effort to halt the spread of communism. It failed even more ignominiously than Korea. By the time the U.S. pulled out in 1974, its original aims in shambles, more than a million civilians were dead (many killed by unconventional weaponry as heinous as gas). The U.S. in turn lost more than 58,000 ground troops. Vietnam is now a united country governed by leaders descended from its northern nationalists.

In the mid-1990s, American and NATO warplanes belatedly took on Serbia, which had moved to quell an uprising in the province of Kosovo, now an independent nation. Unwilling to risk the consequences of a ground war, and entering the Balkans only at the tail end of a feudal civil war that had already cost millions of lives, the punitive intervention, while successful on paper (the regime of Slobodan Milosevic was eventually toppled), only deepened ethnic loathing that still dogs the Balkan day-to-day. But Milosevic’s ouster and his later arrest for war crimes gave NATO forces reason to extol the virtues of “peacekeeping.” In fact, there was little peace involved.

Following the Sept. 11, 2001 terrorist attacks, the U.S. began an air and ground assault on Afghanistan, a thorny, warlord-rich nation run by extremist Muslims and known for its history of xenophobia and incomprehensibly cruel civil strife. The Soviet Union had tried “taming” Afghanistan in the 1980s, at the time drawing Western condemnation, and ultimately failing as miserably as the U.S. had in Vietnam. Factional warfare continued and Muslim guerrillas eventually banded together to form the Taliban, which overran the country in the 1990s.

A decade after a U.S.-led coalition rousted the Taliban that same coalition is now in the latter stages of what amounts to a strategic retreat. It is also negotiating behind the scenes with still-influential Taliban leaders who are determined to take back the country, with a high probability of success.

The Afghan war, focused on limiting causalities while maximizing military and propaganda success, succeeded only in the former. In all, “only” 14,000 coalition troops (including Afghans) have died so far, and even fewer American troops, 2,600. The number of civilian deaths is estimated at between 10,000 and 20,000. Though Afghanistan now boasts a semblance of parliamentary democracy, it is more semblance than fact. The country is substantially unchanged and is gradually reverting toward a pre-2001 stage, with violence still the norm.

In 2003, to further established War on Terror strategy, the United States invaded Iraq, ostensibly because longtime bogeyman Saddam Hussein had ties to al-Qaeda and possessed weapons of mass destruction he might unleash on the West. Saddam, a secular tyrant in the vein of Syria’s Hafez al-Assad (Bashar’s father), had no such arsenal and no affection for extremist Islamic groups. His ouster has since yielded a low-boil but ruinous civil war, with Shiite and Sunni extremists striking at each other regularly as security contractors and mercenaries prowl in the middle. Once again, the semblance of democracy is illusory, with no moral high ground in sight. The country’s grafted democracy is corrupt, as is Afghanistan’s. Most estimate some 100,000 Iraqi civilians have died since 2003, though some insist that figure is low. Again, American combat deaths have been limited — 4,500.

How much better off Iraq is a decade later remains a hotly debated subject, but few Iraqis in Baghdad or elsewhere express optimism about what lies ahead. Some insist that an Iraq left to its own devices will be ripe for a Syria-style civil war, and as result vulnerable to a new dictatorship.

The multifaceted precedents suggest aerial gunboat diplomacy directed at Syria, ostensibly to “punish” the Assad regime’s use of chemical gas (but also to roil Edward Snowden-hosting Russia, an Assad ally), is an act of dubious moral and strategic merit, based not on any formulation of policy but the more easily gratified notion of “doing something.”

Air raids, whether billed as punitive strikes or “message sending” admonishments, will likely increase, not limit, Syrian civilian causalities, since all sides in the that two-year-old fight long ago turned brutal, deceitful and opportunistic. Civilians are not fair game, they are the game.

The need for “demonstrable” indignation, as described by American and British officials — and now approved by the United Nations — rings as sincere but specious as ever, since violence in the name of (ever-elusive) global justice too often presages an increase in all things awful, particularly for the civilians it is designed to protect. Punishment is inflammatory by nature, and outside Norman Rockwell-land inflammations can spread.