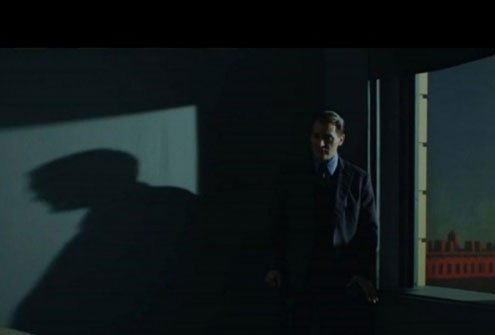 I kind of like a man to be old fashioned and make the first move.
S

now was still falling softly at the end of the day, with streetlights making the stray flakes glimmer. Slush crunched underfoot as Eva scurried to the corner pub, arm-in-arm with a coworker. She hadn’t bothered to grab her parka from the coat check, and now covered her head with the hood of her wool cardigan. Her coworker, Wesley, offered the left lapel of his extra-large suit jacket, and she’d tucked herself close to him. From the waist down he was appropriately outfitted in close-fitting jeans and knee-high combat boots.

They stomped the snow their shoes and joined the others at the back of the bar. After a full day at a trade show down the block, all anyone could fathom was a cold beer and a much-anticipated dinner break.

Eva unzipped her sweater and planted herself on a barstool. Her boss chatted with suppliers just behind her as she compared notes with members of the exhausted but satisfied sales team. She was reaching for her drink when she noticed a man on the other side of the bar. He was alone, or so it appeared. His hair was pulled back into a low, short ponytail. He clutched a beer in one hand and a book in the other. He was looking just behind the cover when they locked eyes.

She smiled. His eyes glinted. He was gorgeous in a brooding sort of way: strong jaw, wide mouth just on the verge of a smirk.

She looked down, trying not to be terribly overt, but a few minutes later she couldn’t help but seek out his gaze again. He was gone. Her heart sank for a second, but what of it? It had been nothing, just a glimpse across a crowded room. Yet it happened so rarely. These days, mobile phones, loud music, and more important people always seemed to get in the way. She regretted looking down so quickly.

A few minutes later she felt a rush of cold air. The door shut and in he walked. Most likely he’d been out for a smoke break. She felt her body slacken with relief, and suddenly tense up again. Was he looking at her? She dared to stare. He was.

It was then that Wesley knocked a fist into her shoulder. “What’s up with you? You’ve barely said a word!”

Eva laughed. “See that guy, he’s looking at me. I smiled back, but he’s not doing anything.”

“Well, he could be a gentleman and come over and talk to me, for one thing.”

“Eva, look around. You’re surrounded by men. You came in sharing my jacket. What’s he supposed to think?”

“I don’t know. I suppose you’re right. But I don’t want to go up to him. I kind of like a man to be old fashioned and make the first move. It makes me feel like a lady.”

The last remark prompted laughter from several of her coworkers, who slapped her on the shoulder and playfully tousled her hair.

They finished their drinks and begrudgingly paid the tip. As they walked out, she shot one last smile at the lone pony-tailed man. He smiled back. Her boss grabbed her by the elbow and planted his cap on her head.

She grumbled a thank you and drifted out with the crowd.

Wes trotted up to her side as they were rounding the corner.

“I gave the guy your card and told him we had to get back to work, but that I thought he should have it.”

Eva blushed. She was thrilled. She immediately pulled out her mobile phone and saw it flashing. She clicked it on. A message warned her to charge it soon.

She sighed and put it away. If it died, all the better, she could spend the rest of her evening in peace.

The next morning she awoke. She’d charged her phone and turned it on. A message from an unknown number appeared. It read,

Hi Eva, I’m Nick. We locked eyes in the pub and I hope not to miss the opportunity to buy you a drink sometime soon.

It took them nearly a month to organize it, but finally they met at Bourbon bar downtown. He was wearing heavy leather boots and worn-in jeans. A few strands of hair fell loosely around his face. He planted a kiss on her cheek and asked her what she wanted.

They sat facing one another, giddy with a month’s anticipation. They clinked glasses. Neither of them knew what would happen next, and that was just fine.