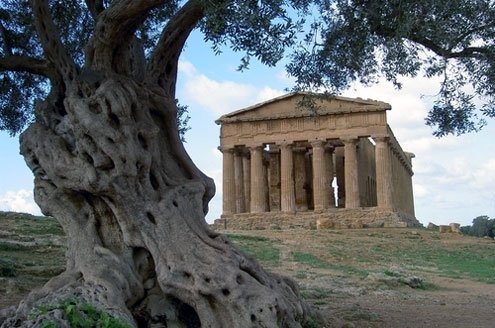 An ancient "man" in Agriento.
M

ost of the encyclopedia-length literature about olives deals with extra virginity. So imagine my astonishment when a little research revealed that olive trees have gender. And sex!

Not the olive drupes or the flowers (which can be hermaphroditic), but the trees. Yes, those knotted perennials that dot much of the Italian Peninsula can actually be male or female.

Lorenzo P. illuminated me on the subject. By day, Lorenzo is a trade option consultant for an important Florentine bank. But 6 p.m., he races home, kisses his beloved wife, sheds his suit and tie, and heads for his century-old olive trees in the family farm the couple co-manages.

How, I asked him, can you tell macho trees from maiden ones? You can’t turn them over like spaniel puppies.

As my chuckle tailed off, Lorenzo turned serious. We were in the garden.

“First of all,” he said, “the female trees are slimmer and more silvery in color…” Lorenzo walked ahead of me in his tattered Wellies while I scampered behind in a pair of kitten heels.

“The males are bigger, stronger, have thicker foliage and are a darker shade of green. You can also tell the sesso of the trees by the shape of their fruit: the male olives are longer and pointy, whereas the female ones are more rotund.”

It was starting to sound awfully anthropomorphic.

“The correct proportion of males to females is one in 10,” he continued.

Pollination, he added, was wind-driven (so the human method is more fun, at least).

As we walked, we passed gnarled and twisted trunks. Gradually I began to see the difference between the he-trees and the she’s.

Some trunks were slender and feminine, with dancing shapes; others were bolder, firm and reassuring. Despite their age (some of Lorenzo’s trees are over 120 years old) the males betrayed no sign of weakness, standing tall and majestic in their biblical orchard.

Lorenzo told me that olive trees remain productive for extremely long periods, provided they are pruned correctly and regularly. This regime, my host explained, has become an exact science.

The centennials we were looking at were saplings compared to common Mediterranean ulivi. One tree, located in Santu Baltolu di Carana on the island of Sardinia (respectfully named S’Ozzastru, the elder) is thought to be between 3,000 to 4,000 years old. That same natural garden overlooking Sardinian Lake Liscia is said to have several other millenary trees.

I tried keeping up with Lorenzo’s brisk pace while taking notes in my olive-green Moleskin notebook. I scribbled as best I could, swatting away bees and clumsily twisting my ankle on the snakelike roots. It seemed like the trees were mocking the ignorant city slicker.

Later, rereading my chicken scratch while sitting on a wooden crate, other bits of Lorenzo’s knowledge surfaced: There are thousands of cultivars of the olive. Italy alone counts at least 300 varietals, though only a few are extensively grown.

Pendolino, Leccino, Frantoio, Moraiolo and Sargano are the principal olive oils — most of which native to Tuscany. Leccino trees, whose imposing trunk and outstretched branches towered above my head, produce olives with a mild, buttery sweet flavor, while the Frantoio variety, also grown here, rears a fruitier oil with a stronger aftertaste.

Lorenzo and I descended the hilly path of the ancient olive grove. I suddenly picked up faraway chatter and in the distance caught a glimpse of a checkered tablecloth flapping in the flecked shade of a large (male) tree.

It was a country buffet banquet in my honor. On a small table, baskets of bread, salumi and cheeses shared space with unlabeled bottles of homemade Chianti and a glistening flagon of cold pressed olive oil. Simple leek frittata and panzanella were piled onto earthenware plates; children wove wheat spikes and Sangiovese grape leaves into head wreaths. The atmosphere was idyllic.

Hours later, the sun began relaxing on the horizon. I heard a faraway train whistling as the conversation shifted from oboe concertos to compared soup recipes.

Food consumed, the picnic waned softly to an end beneath a canopy of sheltering… male trees.

When and where to go

Late fall, October and November in particular, is the best time to witness the fascinating olive oil extraction process for yourself — and even participate in the harvest. Local frantoi (olive mills) sell newly-farmed olive oil on their premises.

If you’re seeing meeting male and female for yourself, and maybe buying some fine cold-pressed olive oil straight from the production vats, here’s a representative list of frantoio farms and estates that offer estate tours, sample tastings and B&B-style accommodation: