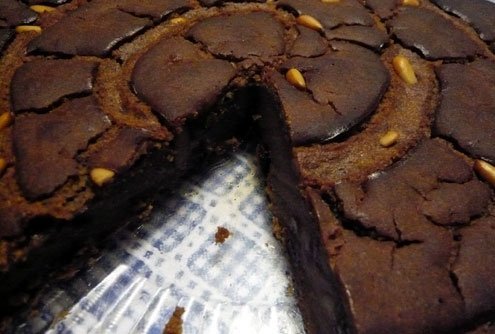 Castagnaccio: Bring on winter.
B

efore Tom Hanks and the movie “Sleepless in Seattle,” many foreigners imagined Italian desserts and conjured up only cannoli (an immigrant favorite) and gelato. But Hanks’s widowed character helped shove the mascarpone and espresso-powered tiramisú into the limelight, giving the Italian dessert industry a sexy shot in the arm and making the little-known cake into an English-language commonplace (even the Japanese got into the act: “Eating tiramisú will make you feel like an Italian all day,” announced a Japanese woman’s magazine in 1991).

But “Sleepless in Seattle” never got a sequel. Nor did Italian desserts.

Most of Italy’s best Italian confections remain a mystery. Beyond gelato and tiramisú, some visitors are lost. Here is my shortlist of lesser-known sweet meal endings, some of which you’ll find regularly on menus, others less often.

Torta della Nonna The traditional “grandmother” cake, also known as Torta di Pinoli, is made with a shortbread base, rich creamy custard and pine nuts (pinoli). It is then baked and then dusted with confectioner’s sugar. Contrary to popular belief, first-time bakers will face a challenge with this one.

Castagnaccio Typical Tuscan non-sweet dessert that inaugurates fall season. Castagnaccio (also known above the Arno River as Baldino) is made from baked chestnut flour and olive oil unleavened dough. This is then studded with pine nuts, raisins and rosemary needles.

Crostata A traditional Italian home-baked tartlet made with a pastafrolla (thick shortbread) crust and slathered with fruit marmalade that is decorated with crisscrossed pastry lattice and then briefly baked in the oven. Delightful variations include Nutella (chocolate hazelnut spread), fig jam, fresh fruit pieces or bitter orange marmalade and limoncello.

Zuppa Inglese Italian custard pudding that despite its name is neither English nor a soup. No one knows the exact origin of the moniker. Some say it was inspired by the English custard “Trifle”; others insist it’s an all-Italian variation. Zuppa inglese is made by spreading custard over a base, usually layers of ladyfingers that are inzuppati (the Italian word for “sopped”) and moistened with Alchermes liqueur (see below). The layered combination is charming to the eye and the palate.

The predominant texture is velvety, because both the aromatic Alchermes and the liquid component in the cream moisten the feathery ladyfingers. Zuppa Inglese purists insist on two-tone custards, but I oddly prefer the cocoa-less version.

Ciaramicola Colorful shortcake typical of Perugia. Tradition holds that young women used to bake it for their fiancé on Easter Sunday as a sign of their commitment. Tablespoons of syrupy Alchermes liqueur in the dough turns the crumb bold scarlet. The liqueur is made with cinnamon, cloves, sugar, vanilla and rose water, and once owed its bright pink color to dye extracted from the cochineal insect.

Today, Alchermes employs all the same Renaissance recipe spices, with E122 food coloring replaces insect color. In shape, ciaramicola is intended to resemble Perugia’s spectacular Medieval Fontana Maggiore. Crimson and silver sprinkles are the town colors, whereas the speckled sugared topping is a prelude to wedding Confetti (sugared almond comfits). Nowadays ciaramicola can be bought year round in bakeries and supermarkets.

Seadas Sardinian delight of unmistakable Arab origin. Seadas or sebadas (depending on island dialects) are a simple and rustic preparation that hail from the Barbagia and Logudoro regions of the Emerald Isle, both traditionally linked to sheep farming.

These are thin-layered dough pockets with sharp pecorino cheese fillings. They’re deep fried and normally drizzled with bitter honey made from blossoms of corbezzolo (strawberry tree). Now a dessert, they were once consumed as an entrée.

Salame di Cioccolato A soul-stirring mix of broken cookie bits, butter and melted chocolate shaped by chilling the ingredients in a tubular mold and serving them sliced at room temperature. The decadent delight looks quite like a salame, and it keeps (for a very short time) in the freezer. Eat it at room temperature with your hands.

Ciambellone This simple homemade ring cake has embodied merenda (afternoon snack) for generations of Italian children. It is a rich, dense, yellow cake traditionally made with 14 eggs for each half kilo of flour, of butter and of sugar — along the lines of U.S. pound cake.

Over the years bakers have tinkered with the original cholesterol-fest formula, reducing the number of eggs and adding baking powder to the batter. The name ciambellone derives from the word ciambella, which means “lifesaver”, obviously referred to its shape. Today’s ciambellone is nutritious and quite caloric, and therefore best prepared (and digested) during the cooler months of the year.

Sbrisolona A friable biscuit cake whose name is a Lombard variation on “sbriciolona,” which derives from sbriciolare, the verb “to crumble.” The recipe calls for equal parts all-purpose flour, cornmeal and sugar, empirically measured in teacups, hence the sbrisolona‘s alternate name Torta delle Tre Tazze (“cake made with three cups”).

Zabaione Soft pudding made with egg yolks, sugar, and sweet Marsala wine. Whipped heavily so that it’s heavy on air molecules, zabaione is a light custard traditionally served with fresh fruits, as flavor of classic gelato flavor, or on its own.

The latter is considered the quintessential sex rush. When a male partner gets lazy in bed, Italian women notoriously rush off to the kitchen to whip up some zabaione. So much for tiramisú.