Of monks, monkeys, and kids

I’ve always had a complex relationship with religion. I barely escaped Catholicism at age 10 but later went on to earn a master’s degree in theology.

My love of monasteries probably came from somewhere deep inside that complexity. It got its start some 40 years ago on a visit to Tassajara Zen Monastery in California. 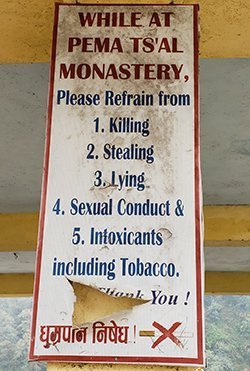 The tear in the fabric of the sign at Pema T’sal does not alter its spirit.

That visit led me to see monasteries as places outside time, or where time is slowed down, where you are offered a rare invitation to indulge unencumbered thought. It’s the kind of invitation I think all of us could use more often these days.

Over decades I’ve had the great good fortune to stay at many monasteries and to speak to all manner of monks.

But three recent trips were particularly powerful. I have changed the names of all the monks, who cherish (and deserve) their anonymity.

The Trappist monastery known as Koningshoeven Abbey sits above a wide expanse of pasture outside the small city of Tilburg in the Netherlands. The cells that visitors occupy are sparse, clean, and quiet. Koningshoeven’s Trappists operate a winery, which supports the abbey. Monks make no religious demands of their visitors, though prayer sessions and normal services are open to those who stay there.

I spent a week at the abbey in 2016, comforted by the solitude at a difficult time of my life. The monks were always glad to talk to you, whether about religion, football, or the pros and cons of the internal combustion engine. They never pressed, and always flashed a ready smile. They also had a sense of humor — proved by the practical joke I helped Brother Mike play on Brother Matthew (involving a bucket of water, a broom, and a coat hanger).

Every time I saw Brother Matthew after the joke, he laughed and wagged his finger at me.

The visit ended with a small wave of excitement I couldn’t have predicted. I needed to take a train from Tilburg to Rotterdam in order to catch the Thalys, one of the world’s finest high-speed trains that connects a number of cities in northern Europe. One taxi never showed up. In the second, I told the driver I was desperate to catch the Tilburg because of the Thalys connection. We had nine minutes.

The Trappist monks in Holland were always glad to talk to you, whether about religion or football.

“Hold on!” she yelled, and off we went, speeding down side streets, backroads, across a railroad yard and cutting corners through an unused pasture.

All the while, she offered a nonstop, high-volume commentary about Dutch life and her meddlesome neighbors. I was breathless on arrival. I also couldn’t stop laughing. I tipped her generously and made my train with a minute to spare.

I enjoyed a different kind of success on a 2017 trip to Solemes, the Benedictine Abbey of St. Peter, at Sable-sur-Sarthe in France. The abbey resembles a Hollywood rendition of Dracula’s castle. It sits forebodingly on the banks of the Sable River in Loire Valley. The Benedictines, one of the strictest of monastic orders, are the keepers of Gregorian chant.

Sitting in their ancient church, bathed in their deep and echoing song, was a transcendent experience.

In a long dark room illuminated only by dusty sunlight that streamed through small stained-glass windows, the brothers of the order sat at communal tables sharing pots of cooked vegetables and fresh bread. One brother in dark robes, standing in a pulpit molded into one of the columns supporting the unpainted vaulted ceiling, intoned from the Bible in Latin. It was a “Name of the Rose” moment.

But trouble brewed early on. One day when I had no lunchtime appetite, I walked through the garden, immersed in thought. Father Edward, furious, found me and all but dragged me to the commissary, where he lectured me on how he didn’t have time to chase miscreant visitors. The (verbatim) exchange itself was shocking.

Me: “Well, I shall endeavor to do better.” Father Edward: “That’s not good enough.”

Oh father, but it is, I thought, and how sad you do not understand this.

I packed my bag and left, telling Father Edward’s co-instructor, Father Ben, that notwithstanding 1,500 years, the Benedictines remained miserable communicators. I walked 50 yards across the street, and checked into a Michelin rated hotel with a spa — which I enjoyed daily without the slightest guilt.

A 2018 trip to Nepal’s Pema T’sal Buddhist Monastery convinced me that zealousness extends beyond the Benedictines. Nestled spectacularly in the Himalayan foothills, the monastery teaches boys (some as young as five) computer skills, math, English, history and, oh yes, Buddhist philosophy.

Benedictine Father Edward, furious, found me and all but dragged me to the commissary.

Though very hands-off, the monks at Pema T’sal will nonetheless talk for hours if approached. They very earnestly wish you to see the wisdom of living life through Buddha’s teachings. By the end of my two weeks, I couldn’t shake the feeling that they counted me a failure.

What most captivated me were the macaque monkeys, which made Pema T’sal their home, and the children, who disappeared into silent classes only to burst from buildings with the enthusiasm of a sports squad. I was taken in by the noise and the laughter, and the sight of children, their heads shaved, playing games (including ping-pong on concrete) in red robes. This joy may have been the most powerful lesson in Buddha.

Looking back, all my conversations with monks were meaningful in one way or another. But most poignant, were smaller things: the strolls among trees, and losing at a game of stones I played with the boys. The best travel educates you. But sometimes its best moments come when people tell you jokes, or when a monkey steals your banana. If your travels lack such moments, give a monastery a try.