Of mice and women 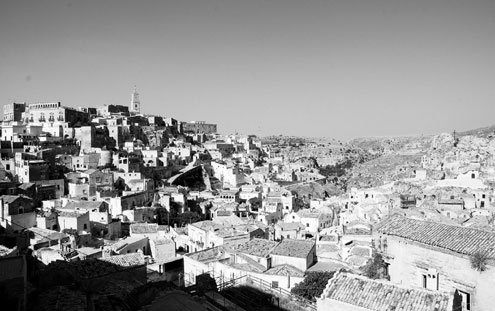 Eboli, in Campania, opens into Basilicata, which remains among Italy's poorest provinces.
I

am sitting in the reading room of an eight-million volume library. I am 27 years old and in my first semester of an Italian Masters/PhD program that will be my sole occupation for the next seven years.

I now know that John Steinbeck was right about the best laid plans of mice and men. What got me into this chair in this room on this date, were, in retrospect, not the seemingly “pivotal” choices in life, but those made on a whim.

One afternoon in high school, I was chatting online with an acquaintance who’d graduated the year before me. He’d decided to transfer to DePaul University and recommended I do the same. I’d already sent all of my applications but I idly browsed the school’s website and 10 minutes later had filled out the DePaul application. I never spoke to him again nor did he transfer to DePaul, but I was accepted. I went.

At DePaul’s orientation I was characteristically under-enthusiastic. I’d made friends with an anorexic little antagonist who had a pretty face, shaved head, a couple of skull tattoos, and who hated her rich family. She was apparently attracted to me by our mutual sullenness.

Just as I was told to sign up for the Spanish placement exam, she told me she was going to skip out on the rest of the day and did I want to join her? I looked at her, looked at the sign-up sheet, looked back at her and asked, “What language is closest to Spanish?” Fifteen minutes later we were sitting on a curb in the sunshine, blowing the angst out of horribly cliché cigarettes. That fall I reluctantly began Italian 101.

The next few years, let’s say 2003-2008, contained some relatively lucid and pointed decisions. I continued with Italian after the first year so that I could study in Rome. Then I wanted to speak Italian ben bene so I locked myself in my room for hours at night and read books like Levi’s “Cristo si è fermato a Eboli,” Silone’s “Fontamara,” Moravia’s “Il conformista,” and Calvino’s “Le Cosmicomiche.”

When I graduated I still wasn’t fluent, however, which led me back to Rome as an au pair. A year after my move I was dreaming in Italian and three years after that I was ready to come home and go back to school.

There are a few strange things about getting into graduate school. The first is that it’s not like the undergraduate experience. It’s a high pressure, high stakes game of persuasion the university plays with the prospective student. They fly you out to visit, set you up with departmental meetings, take you to dinner at the faculty club, quote from your thesis.

The second point is that offer expires. If you haven’t signed a “contract” by April 15, the offer is off the table.

The third is that once you have signed that contract, because the departments are so close-knit and all professors are colleagues of sorts, it is nearly impossible to break one to accept another. I felt this pressure as I visited schools.

On April 12, I shook hands with the head of one Italian department, saying, “I really like the program and as soon as I get home I will sign the contract.” As it turned out, I arrived home late on April 13 and fell asleep on the couch, too tired to sign anything.

The next morning I couldn’t find the paperwork they’d sent me to sign. At about 11 a.m. I asked them to resend it. I then decided it was the perfect time to (of all things!) lock myself up and write my column. I emerged a couple of hours later to find two emails on my computer screen. One was the paperwork I’d requested, sent at 11:12 a.m. The other was from Harvard, which had wait-listed me in January and I’d basically forgotten about. That message was sent at 12:54 p.m. It began: “We are happy to announce that…”

I would have been happy at UCLA, but my brother eloquently put an end to my last-second vacillation: “What’s the choice, Julie? It’s f*cking Harvard.”

I’ve been a long-time fan of serendipity, so long as it doesn’t pertain to the John Cusack film, and this turn of events seals it for me. I trust life. I trust whatever force is constantly bowling over our best-laid plans. I’d guess that force knows better than I do.