Of mice and cities 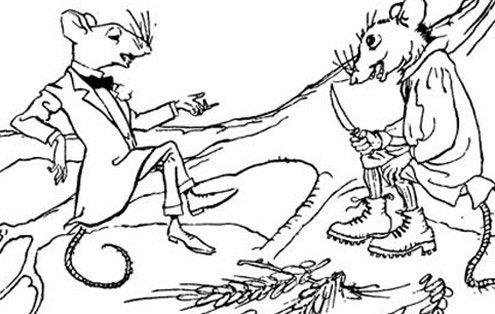 rote Aesop, “I’d rather gnaw a bean than be gnawed by continual fear.” In ancient times, the country mouse did the gnawing while the city resident bit its nails. The Greeks swore by rural vs. city theme. Horace saw the bean as a perk of small town security, with fear the price of glamorous city living. Aesop’s Fables later picked up the same theme.

When I think about the mice I wonder about my own identity. Here I am, a student in New York, torn between the city mouse’s love of city — culture, vibrant people, intriguing events, posh bars, and, yes, exorbitant rent — and a country rodent’s plump and jolly contentment with solitude and the strange characters concealed in the folds of valleys.

But city lights never stopped country elopement. I’d go home to walk down dirt roads, rummage through cow pastures, plow along creek banks. Nothing seemed to change. My dogs got older, my brothers got bigger, and my parents seemed calmer.

Country life slyly worked its way into each of my urban transitions as if to remind me there was a world outside ideas and pure commerce, and that “other” people chose to live, and could live, outside the urban spectacle. Knowing this made me more self-aware, and maybe more delusional.

These days, the Ivory Tower is my city life. I devour concepts, coffee, scones, and — I confess — cigarettes and red wine. My country mouse rosy-cheeked plumpness has lost its luster and my tail (wherever it might be) is frayed from schlepping bags to and fro, from sleepless nights, from mounds of readings and assignments, from new and fleeting places of residence, from countless subway rides.

The Ivory Tower city has been a sharper-than-usual switch from country store life (no more slicing meat, walking dogs, and baking pies).

So what, I wonder, is the moral of this story, of my story — since city and country, prince and pauper, princess and slipper, always seems to have one? Which place is the place? Is one better than the other? Does one corrupt the soul while the other preserves it and keeps it whole? Do earth or hard concrete determine our rodent type?

Isn’t it possible that gnawing is just gnawing, whether it’s in alleyways or valleys? Maybe fear and neurosis are in all landscapes.

In most mouse stories, country ways prevail. The rural mouse finally flees, fearing the city cat. In La Fontaine’s fables, the mouse isn’t a mouse but a rat, but it still runs home. In postwar Tom & Jerry cartoons, Jerry’s trip to the city — in an episode called, what else, “Mouse in Manhattan” — leads to bumbling among trashcans, dark alleys, and police bullets.

My own verdict is still out. But the odds — you’d call them trends these days — seem stacked against the country mouse. Most of the world now lives in cities, including plenty of mice, rats, and cats (and a few humans). Many may gnaw but they also stay on. They crave the show that also scares them. They’re like actors in the more ambiguous eastern version of the story in which a lean cat gets invited to the king’s table by the sweet-talking fat cat. A bounty awaits the lean cat, or so he thinks. Hungry, he can’t wait.

Too bad the king wakes up the next day with a bright idea: to reduce the city’s cat population.