Of memes, friends, and bragging rights 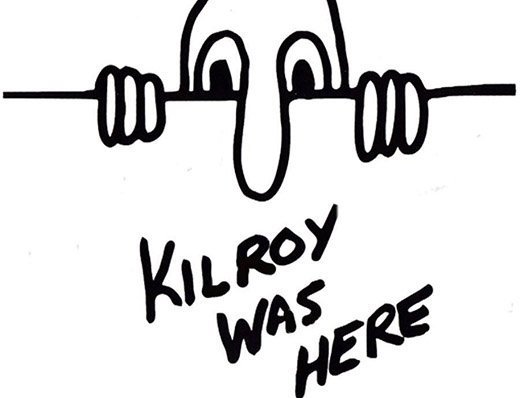 "Kilroy was here…": An early meme in motion.
M

y roommates and I were sitting on the couch not too long ago when we stumbled on a meme, which more often than not is how philosophical conversations between millennials get their start.

This meme suggested that throughout life you meet hundreds of people, but you really only have about thirty friends, and that only a handful of those count are close friends.

Memes matter because they’re often right, or at least on the right track. But thinking about my own friends led me down another path: Are Italy and America different when it comes to friends and friendship? And that really is a good question.

In Italy, for example, the school system dictates how you make friends. You’re randomly assigned to a classroom with a few dozen other kids. Since, unlike the U.S., the teachers are the ones that move from classroom to classroom, you spend every day for five years (in the case of elementary school and high school) — three in the case of middle school — surrounded by the same faces.

Stuck on a desert island, it might not matter that your only companion chews loudly.

This creates what I like calling the “Apocalyptic Island Conditions.” If you were stuck on an island in some post-apocalyptic scenario, it might not matter that the only other human left chews loudly. You’d probably just be glad not to be eating alone. And that’s just the kind of feeling the Italian school system nourishes. Since the majority of your day for a significant period of time is spent with the same people, you’re pretty much compelled to make it work. Italian schools also lack organized activities. So, when looking for a sports team, you often end up joining informal ones with your classmates. I was on the same volleyball team with six of the twelve girls in my class.

What this means is that you end up spending much of your young life with whoever the school secretary happens to clump together. And, as the years pass, most students drop their after-school activities in favor of hanging out with those they like, further shrinking the circle.

America is another story. Since you have a choice of classes, you generally place yourself close to those you might get along with. If you pick American history over biology, chances are you’re associating yourself with people who also prefer history to biology. Since after-school activities are many and organized by the school, there’s a very good chance you’ll come across students you might not otherwise have met.

In short, in Italy students form tight, bubble-like clusters to protect themselves against the unknown. In America you have a wider but shallower network that’s open to change.

How does this affect friendship? The fact that in Italy you know you’re limited to a finite group of classmates can be helpful. You can come to set aside pettiness — “She doesn’t have that cool knapsack.” You can also make lifetime friends. My Italian father still spends time with kids he met when he was in first grade. That’s how the strong communal bonds many admire about Italy are formed.

But these benefits also feed a harsher side. Again, you have little choice. These are (and will be) your classmates, sink or swim. You make it work or risk being an outcast. Oh, and you can also bet that girl will eventually get that cool knapsack. Sink or swim means fitting in.

Sink or swim means fitting in.

I’ve had Italian classmates who subjugated basic personality traits to make friends, and to keep them. Some try not to be too funny, or too opinionated, or annoyed when the popular girl wants to again go over the “signs” her crush is sending her. You must feign interest and invest yourself in the lives of others. After all, it’s for the good of your long-term social life.

Sadly, you don’t fully realize how much you’re bending who you are, at least not at the time. I was able to only because I knew I had a definite “out” date: I knew I was headed for boarding school in America. I could drop my blinders and see the blandness that this kind of friendship style demanded and depended on.

But, I discovered what my favored classmates actually liked. The hours we spent together (and the candor) helped forge strong bonds that endure years later.

As for the American style, the immediate benefits include having a wider pool of potential friends, each one suiting different aspects of your personality. But these friendships can feel disjointed. When a friend recently invited his college friends to meet us, his post-grad ones, he was justifiably uneasy, and rightly so. We didn’t really mesh well, and my friend soon realized how those friends were “specific” to his undergrad self.

At the same time, America allows you the confidence that comes of knowing that close ties are based on genuine feelings. The market is friend-saturated. Unlike the Italian model, there’s choice: no one is forced to make do with those immediately around them.

There are all sorts of marked differences between the two countries. But that’s not what you should be taking away from this essay. Instead, should know I wrote it as a subtle way of bragging that I do have friends, and while it’s now hidden away, a very cool knapsack.