Of knives and fire 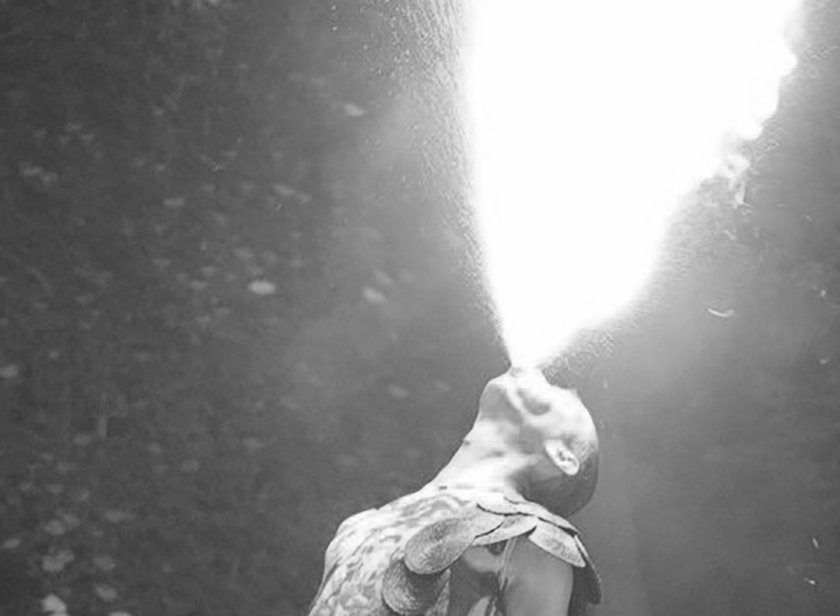 ome memories seem not to belong to one’s own life, but rather as details from a youth spent on some hospitable planet of another galaxy. The traveling knife-sharpener falls into that category. This was the time of year (late spring) that he’d announce his arrival underneath the building I lived in by a jangling sound from a metal triangle. The sound was strange and sharp enough that it could not by mistaken as some instrument carried by a traveling minstrel, let alone with the fulsome melodies accordion players made while making the neighborhood rounds, monkeys often beside them.

As my mind’s eye recalls him (and that eye is all I have left), he was a tall, thin, vaguely malnourished man who spoke hardly a word. My mother would send me down to him and I’d find him surrounded by local maids, each one with kitchen knives in need of sharpening. I stood behind these women, not knowing what to make of their chatter, and waited for the knife-sharpener to notice me, and when my time came he nodded.

I’d give him a clutch of knives that he sharpened on a pedal lathe built into a wheeled cart, which he pulled. It looked like a cart a mule might once have dragged, but this was now the great 20th-century and men did not rely any longer on mules or other domestic animals, because to do so was not only illegal but an unwanted umbilical chord to a past Italy had ostensibly grown out of. It was now a modern country, or so some said.

But the knife-sharpener could not have been less modern, working amid scratches and sparks, in the spirit of a smithy tied to a moving store. He’d move from neighborhood to neighborhood, the residents familiar with his biannual rhythms (spring and fall).

I stood behind these women and waited for the knife-sharpener to notice me.

I loved watching the sparks jump from the flywheel as he pedaled it into a frenzy so passionate the knives had no choice but to relinquish their bluntness. He appeared to me like and enchanter or a seducer, and while he worked he paid no attention to those around him, though he occasionally invited me a little closer so I could see him work. He wore no blinders against these dancing sparks. He behaved as if he’d tamed them long ago. In this way he reminded me of the long-gone fire eaters at Piazza Navona in the center, broad kerosene flavored men who’d swallow kebobs of flame and receive in return the applause and gasps of small children, who could not believe their eyes.

As my own eyes die, I’m prone to indulge in these old moments, remembering the wideness of my own child’s eyes made completely mad by the fire-eater, wondering where in the body the flame had gone, what inside had been set alight, how could a man do such a thing? I later learned the method of the trick but it did little to dampen my lingering kerosene awe. I recall taking my first girlfriend to the piazza to watch a display and she came away aroused, amazed, and terrified, all the more so since a drop of kerosene had landed on her brow. The fire-eater paused and gently approach her with a clean rag he used to clean the spot, bowing respectfully before returning to the hot kebob rods and his tall upward spew.

The knife-sharpener could not have been more banal in comparison, but both the fire-eaters and the knife men carried in their art the spirit of something primal, and now long-vanished from Rome and most developed world capitals: they still had pockets full of medieval stardust in their vests, messengers of a sort from another time, or from a galaxy far, far away.  By the end of last century, both “vocations” were gone, or outlawed in the name of public health.

Rome has few antiques aside from ruins.

The organ grinders persisted just a little longer, usually around tourist-filled restaurants, their monkeys running table-to-table with berets full of loose change. Then the monkeys were banned in the name of hygiene and the organ players tried for a time to make it on their own, but bereft of sideshows few listened to their music and Rome citizens snubbed them as archaic vestiges of a time best forgotten, a poor time. Smalls bands and minstrels replaced them, but they too are now gone.

The Rome I can no longer see is now ostensibly a modern city on par with other modern cities, just as loud, just as virus-stricken (a joke the medieval played on the modern to reign in its technological immodesties). Rome has few antiques aside from ruins.

Until he finally ran out of gas, both literally and figuratively, one fire-eater defied the seasons and performed at Piazza Navona in winter. I remember seeing him in the all-but-deserted piazza on a rare snowy day in 1984. His fire canceled out the falling snow in a wide ring around him, and there was no one there to watch.

“Even in the snow?” I shouted to him between displays.

He paused, his orange face like that of a creature from another planet. He said nothing but pointed to the wet coin-box before him, into which I poured all the change I had in my pockets.

He then drank from his stash and sent a plume so high into the snowy sky I swear I can still see it today.