Of Brown and muffin mysteries 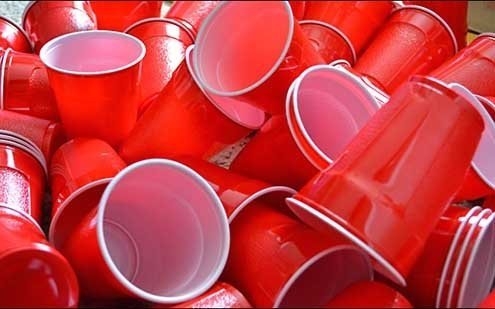 People really do party with red Solo cups, just like in the movies.
I

recently finished college. Now that I’m more mature than I’ve ever been or will ever be (degree in hand), I want to impart some reflections, ruminations and fallacies — before they’re hijacked by a six-hour marathon of “Khloe and Kourtney take Miami.” I think you’ll be impressed.

1. Every semester makes you think you’re a reformed woman.

In my final semester, I got used to reading two books a week. It was the new me. I promised myself I’d keep it up after graduation. It’s not going to happen. How do I know? Well, after my semester of Studio Art 100. I also thought I’d keep drawing with charcoal because (voices in the background) “it was a relaxing creative outlet.”

I also thought (again, the new me) that I’d finally trained my attention span to sit through a two-hour experimental French movie, a skill I’d always wanted to acquire because (voices in the background) “you don’t want to lose your French, and it’s a great ice breaker.”

The reformed woman would also continue studying biology experiment summaries, read three plays a week, and write one every six months. On the plus side I still have the charcoal.

I’m not sure whether I was more worried about academic repercussions or moral justice, but half the time I spent writing papers was about quintuple checking that I’d cited the work of others properly. When I did research on subjects already covered by a published author, I’d always cite the established writer — arguably to a fault, since I buried my own thinking. My professors must have seen me as an unoriginal thinker but a great citer.

Many recommended a more casual approach. This often happened in the form of an older kid at a family party saying, “Oh yeah, man, citations. I mean, you get to a point where you don’t even care anymore.” They’d then take another proud swig of whatever they were illegally drinking. If I could see them today I’d have a comebacker, as in: “I think you just got sloppy and I’m just paranoid.” My fear remains.

My college apartment was across an alley from the houses of the football team and the girls’ field hockey team. You might be surprised to hear that I become so emotionally involved with their romantic dramas I began caring about them. I cared about the girl who eagerly shouted “Hey TJ!” from the roof of the field hockey house one night during a party, only to have TJ reply, “Hey… who’s that?” to which the girl said, “It’s Kelly,” more wistful than angry. I really hope you find what you’re looking for, Kelly.

I cared that the people who attended the football parties went inside the house or at least didn’t linger in the parking lot, since lingering only attracted police attention. I cared that the field hockey girl and the football guy who had a mock wedding made it in real life (this included a sign that read “I’m rooting for you” in a number of windows).

4. You will never learn how much muffins cost at the school café.

Brown students are smart, but for whatever reason there’s a campus-wide impediment to learning the price of the muffins at the main café, myself included. A university comprised of more than 5,000 undergrads collectively guesses that they’re priced between $2 and $3.

For more than a year and a half I bought muffins at the Blue Room campus café, and I actually worked there for a year and a half. Still, the best I could say about a muffin was, “I think you can buy two with a meal credit.” While I’ll gladly discuss the minutia of medieval social hierarchy with you, please don’t ask me what a muffins costs.

5. Some people seem to never graduate.

You’re a freshman and you spot someone confidently striding across campus to a building you’ve yet to learn the name of (even though you have class in there twice a week). You immediately guess the confident student is a senior. A year later, look who’s walking into the 300-person “Post-Colonial Readings of Pre-Modern Societies” seminar. Same kid. He must have been a junior: easy mistake. Now you’re a junior chatting with a friend in the school bookstore. There he is again, the elusive student perusing the Balkan Cinema materials. Okay, you say to yourself, you got it all wrong. He must be a senior now. You draw a lime under it. In fact, you’re so convinced of this that as you line up for graduation senior spring the next year, he’s the last person you expect to see. “Saravalle?” he says. You nod, stupefied. He nods back and says, “I’m Sarenson. I’m right after you.”

There are other things I learned. For example, when you’re unsure if it’s a first-degree burn it’s usually a second-degree burn. Oh, and that the Hallmark Channel plays Christmas movies 24/7 starting around Halloween. The best thing I learned? People really do party with red Solo cups, just like in the movies.