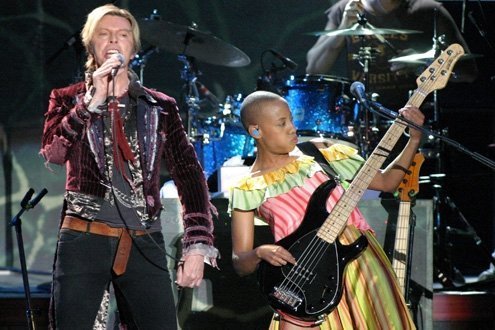 David Bowie's final American southern swing included a 2004 stop in Atlanta, where he played with Gail Ann Dorsey.
I

can’t say I was ever a dedicated fan of David Bowie’s. I’m a late-1980s kid. I’ll always remember him as the Goblin King in the movie “Labyrinth,” Jim Henson’s beloved cult fantasy classic. Bowie was campy, sexual, and strange as he danced with muppets and stole babies. It was that movie alone — I had no other context for his music or his work — that seared Bowie into my pre-adolescent mind as a risqué and off-kilter icon. When I finally discovered his music in my late teens, no explanation was needed. Even though I still knew nothing about him, his image had already transcended the roles he played.

In a way, he fit perfectly in the Italian historical archetypes I was most familiar with: he was a Renaissance man of the pop age. He made music, art, movies, and lived out his fluid philosophical views in public. He was a relentless creative force who pushed us to question sexuality and identity while never destabilizing the power of pop idolatry.

Though I can still only recall only a handful of his biggest hits, I still went to New Orleans to parade in his memory. Glitzed out with a red British military jacket and gold face-paint, I celebrated his life by fruitlessly trying to chase down the Preservation Hall Jazz Band as it marched through the French Quarter. Around me were droves of people in freaky costume.

I felt disconnected at first, like someone just tagging along for the spectacle. The power of Bowie’s legacy only hit me later, when we were sitting in the halogen-lit food court of a nearby mall. Though still dressed as the weird freaks Bowie encouraged us to be, no one batted an eyelash at us. Even if they had, we probably would have broken out in dance.

That realization pushed me into culture shock. A day after driving down from Mississippi, there I was, creatively and ambiguously dressed in an atmosphere supported by the pre-existing culture of New Orleans itself. Bowie suddenly made perfect sense. What other pop music star (besides maybe Prince) ever pushed beyond the boundaries of stardom to make identity itself into both artwork and a symbol of subversion? In the city of costumed parades, he was being hailed as king.

New Orleans is a place where identity, sexuality, and normalcy are fluid rather than binary. I enjoy it. But being there redoubles my commitment to Mississippi. There are many “Bowies” in the more rural and conservative parts of the world, but cultural and sexual norms around them shut them down. They’re on the fringes, if not ostracized.

In 2013, CNN’s John D. Sutter, who is gay, reported on a visit to Franklin County, Mississippi (pop. 8,000) where, according to the 2010 Census, there were precisely zero same-sex couples. Sutter’s underlying question — “Is it really possible that there are no same sex couples in an entire county?” —ultimately became more of a meditation on his own perceived sexuality, all this as he explored Franklin’s communities. In rural Mississippi — in which gender and sexuality are seen in extremely simple terms — male/female and heterosexual/homosexual — Sutter was suddenly self-conscious about who he was, how he dressed, and what he ordered to eat and drink. He worried about how he’d be perceived, and recognized the meaning of the problematic silence surrounding Franklin’s oppressive stance on sexuality. The same-sex couples he uncovered sensed the same thing, but had to weigh their desire to stay in their beloved communities against pushing against local cultural definitions of gender and sexuality. “It’s not that gay people here (or anywhere really) want to be in the closet, necessarily,” wrote Sutter. “It’s the rest of the world that pushes them in and shuts the door.”

Mississippi as a whole averages a 9.8 out of 100 in the Municipal Equality Index (an index which rates municipalities based on their non-discrimination laws and relationships with the LGBTQ community). Mississippi’s existing laws permit sexually based discrimination in employment, housing, and more. Notoriously, Mississippi was slow to allow for same-sex marriage even after the Supreme Court’s landmark 2015 decision. Even now, only 34 percent of state residents the same-sex freedom to marry.

The off-putting feeling Sutter sensed should have come as no surprise. Whatever your sexual bent, the tone changes in an unsettling way when any potential for queerness arises.

That’s not to say Mississippi lacks creativity and wildness. Those filled with pride and joy irrepressibly don shiny pastel-green suits and take a Sunday walk, shaking hands with the friendly. But these moments are usually cordoned off and sanitized into acts of non-transgression. They have their stage, and their time. They’re considered snippets of state’s theatrics, like trifles or eccentricities.

There’s still no Space Oddity in Mississippi. And no landing pad should one or more decide to turn up.