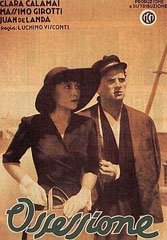 Luchino Visconti’s 1943 Ossessione, his debut film, is a subversive anti-Fascist noir, a triumphant and combative contemporary chronicle that stands in contrast to the squeaky-clean tales of the secretary Cinderellas that dominated Italy’s so-called “telefoni bianchi” genre, the American knockoff style of the 1930s. Visconti’s film is as wild and as unruly as its menacing title, a tempestuous love story peppered with forbidden passion, wrong turns, and shot through with betrayal.

Wandering tramp Gino (Massimo Girotti) stops at a roadside restaurant only to meet Giovanna (Clara Calamai), a bored and frustrated wife who wastes no time seducing him and convincing her fat and dim-witted husband Giuseppe (Juan De Landa) that they could use an extra pair of hands, Gino’s, about the place. As the infatuation between Gino and Giovanna grows, so do restrictions on their affair. They decide their only chance at happiness is to murder Giuseppe. But after the lust-induced act, both are wracked with high-stakes guilt and paranoia.

Stylistically influenced by French director Jean Renoir (for whom Visconti worked in 1930s), “Obsession” is based on James M. Cain’s “The Postman Always Rings Twice.” Visconti uses the image of being on the road, shifting from place to place, as a prominent metaphor for Italy’s social and political blind alley.

Not surprisingly, the film was denounced and confiscated — with the crumbling Fascist regime and the Roman Catholic Church leading the charge. Prints were seized and destroyed. Though Visconti held on to a duplicate negative, the film wasn’t distributed outside of Italy until 1976, the year of his death, which made “Obsession” more talked about than seen.

But its unglamorous and starkly realistic love story went well beyond anything acceptable on film at the time, with fully fleshed-out characters and profound metaphoric symbolism. It was the epiphany Italian cinema needed, laying the foundations for postwar neorealism. Above all else, it represented an explosive liberation from the suffocating fluffiness and lies that had dominated Italian cinema almost since its inception.