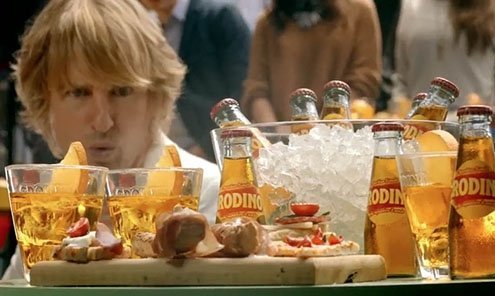 Owen Wilson hamming it up for Crodino.
A

s late summer heat continues pummeling the boot-shaped peninsula, Italians run to their fridges to grab their favorite beverages. Forget Coke. Many of these drinks are vintage classics, others postwar staples. None are universally known or widely sold beyond Italy.

Tamarindo: Sweet, tart and refreshing, tamarind was hugely popular before sodas took over. Majestic tamarind trees, native to Madagascar, bear fruit shaped like dusty pods. In Italy the tamarindo beverage is basically syrup diluted with water. The pods are boiled, the seeds removed, leaving a sap-like liquid that’s then mixed with sugar.

Orzata: Non-alcoholic orzata owes its name to the original formula — a blend of crushed almonds and barley (the root orzo is Italian for barley). Orzata is a sweet syrup made with almond milk, sugar, vanilla, walnut, essential oils, rosewater, and orange blossom water. Since Italy has no FDA-style law enforcing the use of real almonds, knock-offs abound (some made with benzoin, a synthesized organic compound). Commonly served diluted with water and ice cubes, orzata also helps flavor cocktails, including the rum and pineapple juice based Mai Tai.

Latte e menta: Mix cold milk with forest-green mint syrup and you get a great heat-beater. Latte e menta is a non-alcoholic long drink kids love, even those who resist milk. Some make it a occhio, the naked eye as a recipe, using a ratio of 2/3 milk and 1/3 mint syrup, then adding a cascade of ice cubes. The “tropical” version introduces orzata to the mix.

Gingerino: Originally marketed by Recoaro, gingerino was developed in the 1950s as a non-alcoholic sparkling beverage combining sugar, citrus extract, spices and herbs. Ginger is the key, of course, and the drink is slightly bitter and spicy. It’s sipped “straight up,” on the rocks or diluted with water. Pass the potato chips, please.

Aranciata amara: Italians have never craved carbonated orange drinks. Orangeades clash with their palate. Aranciata amara, a bitter soda, gets around the bias. Aranciata amara is a staple as a stand-alone and in making cocktails. Mix Campari, aranciata amara and club soda and you get a Garibaldi, its color resembling the red his soldiers wore.

Lemonsoda: With its cloudy deposit at the bottom of the bottle and its tart bite, lemon-flavored soft drink Lemonsoda was developed in Milan in the 1940s and quickly became a hit. In 1980 the brand was acquired by Crodo, which later became part of the Campari Group.

Cinzanino 3 gradi: Cinzano vermouths date back to 1757. The Turin herbal shop of brothers Giovanni Giacomo and Carlo Stefano Cinzano gave birth to a new (and secret) “vermouth rosso” formula that used aromatic Alpine plants including marjoram, thyme, elderflower, and dozens more. The drink is now served as an aperitif in 10 cl bottles. It’s low in alcohol (three percent vol.), making it a light, leisure-time beverage. The flavor has notes of bitter orange and lemon — pure Mediterranean.

As for plant-based liqueurs and distilled beverages, limoncello seems on everyone’s lips, but it’s hardly alone.

Cynar: This popular amaro — alcoholic digestive, or bitter — comes from a blend of 13 herbs and aromatic plants. Predominant is the artichoke (Cynara scolymus), hence the name. Dark brown, bittersweet Cynar is a bizarre drinking experience because of its loyalty to the artichoke.

Genziana: Infusing gentian roots into alcohol produces a wildly bitter, pale yellow grappa-like digestive that serves as a base for many Italian amari. The gentian plant (roots included) was embraced for millennia for its medicinal properties. Medieval monks mixed alcohol and plant extracts to produce tinctures, balms and elixirs. Inexpensive genziana, now hugely popular, was traditionally an artisan product from the Abruzzo Apennines, where the plant grows wild.

Ratafià: Making and drinking sweet ratafià is another age-old Abruzzo country tradition that’s recently surged in popularity. Recipes for Ratafià change according to village and family. Made with sour cherries and local Montepulciano wine, its intense redness reflects both.

Nocino: Nocino is a traditional northern Italian liqueur made from unripe walnuts. The green fruit is harvested on June 24 (the feast of San Giovanni) and usually ready for drinking by Christmas. Sticky dark brown, aromatic and bittersweet, the best Nocino is usually homemade. Family recipes can add cloves or cinnamon, which is why nothing beats the homemade stuff.

Mirto: Mirto is a dark herbal digestive common in its birthplace of Sardinia. It’s made with myrtle berries (they grow wild on the island) and tastes like a resinous combination of gin and Fernet-Branca, a commercial brand of amaro. Making it involves infusing crushed ripe myrtle berries with alcohol that’s sweetened with sugar or honey.

Liquirizia: Made by steeping Calabrian licorice roots in alcohol with sugar, liquirizia is a thirst-quencher, a breath-freshener and a digestive. Versatile, it can be served pure and chilled in small shot glasses or used as a topping dribbled over lemon gelato or sorbet.

Rosolio: Popular in Sicily, where it’s been prepared since the 16th century, pink Rosolio was served to houseguests as a sign of respect and courtesy. The cordial was originally made from rose petals steeped in a spiced water-based syrup and then strained before serving. Over time, rosolio became an alcoholic drink with a predominantly citrus flavor over the original rose base.

When in Italy, wine isn’t the only solution. Put your sodas down and look around you.