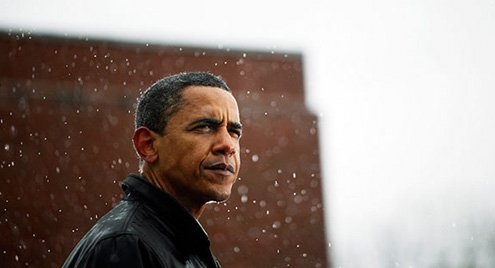 hake out a century and snapshots slip from its pockets. Take Robert Capa’s Spanish Civil War photo of a bullet-blurred Republican solider. Or Weegee’s 1956 image of dancers in a Beat-era trace.

Credit Damon Winter of The New York Times with his own piece of history. He caught Barack Obama on a rainy Tuesday podium in Pennsylvania and emerged with an indelible portrait. The shot made the Democratic candidate look weatherbeaten, even gloomy, reminiscent of Bobby Kennedy during the mercurial, ultimately fatalistic late spring of 1968. The face Winter captured was outside race or ethnicity, its youthful promise second-fiddle to furrowed calluses. Propaganda failed the image starkly.

Obama’s face embodied not only the peril of an election he has yet to win but the rigors of a presidency that if achieved may yield more adversity than the massaging deliverance his fans so deeply desire. The Oval Office is no easy business.

In 1976, an incandescent Jimmy Carter looked every bit the star of post-Watergate era. Climbing down from a helicopter on a visit to annihilated Mount Saint Helens four years later, primordial ash levitated from his shirt like seasoned metaphors. American hostages had been trapped in Iran for a year; Moscow had outfoxed his efforts at détente. It would take Carter 20 years to recover from four. His smile was never the same.

The face Winter captured was that of a thinker. It has a compelling intellectual dimension, hardly voguish, that borders on the inscrutable. It couldn’t differ more dramatically from that of George W. Bush, who showed pleasure or bemusement but little modulation. He was concerned but never grave. Gravity wasn’t in his nature.

It is in Obama’s. Despite his natural eloquence, he is not always sanguine in either speech or demeanor. His ruminative side intrigues and perplexes, and rightly so.

What his backers may not get, but what the photograph evidences, is a vision of a man on whom the White House will weigh, and never casually. It will mark him. It will likely make him more not less severe. His national exuberance, already tempered, may well yield to formidable cloistering once in power, should he get there.

So what does the face say? What words define it?

Stubborn idealism comes close, melancholic optimism also. Obama possesses Bill Clinton-style oratorical skills but lacks clever Clinton’s preternatural chumminess, the kind that won him lifetime fans while sowing the seeds of his downfall. Obama is instead remote from back-slap politics. Winter’s Pennsylvanian face is that of an inquisitive, formal man that keeps highs and lows in clinical equipoise. It’s protean curiosity whose flip side can’t do without doubt.

Candid shots are inscrutable by nature. By seeming to tell all, they say nothing certain. Instead, they’re a hint, a divulgation, an intimacy. Obama was certainly cold and possibly bone weary. Maybe his sneakers were soaked. No doubt he looked ahead to shelter from the Pennsylvania storm.

Yet the portrait is important for its candor. Campaigns run on scripts. But Obama in the rain is unrehearsed. The storm has one-upped any prepping. Notwithstanding the absence of manipulated visual flattery, the man some Christian zealots have gone so far as to label a clandestine Muslim, even the anti-Christ, stood his damply dignified ground.

Is the United States prepared for such dignity? Can the man behind such a face prevail over the exaggerated scrutiny that comes with the office? (“I will not be a perfect president,” he has said, both falsely modest and modest; “I was actually born on Krypton,” he has joked disarmingly). Can rain-faced Superman handle the happily vulgar, in-your-face side of the Unites States?

The face answers “yes,” but not without misgiving. To John McCain, who on the same rainy day in Pennsylvania spoke confrontationally — he derided Obama’s use of the verb “consider”; “We don’t need to consider, we need to drill now,” he said of offshore drilling — Obama replied with typical calm: “It’s not easy standing in the cold and in the rain, you know it’s not easy, but you also know this is time to come together.”

These are not only separate tactical visions but overpoweringly different psychologies. McCain knows only to charge, which is all that is left to him. Obama meanwhile is destined to feel the rain concealed within sunny days. His mind has a melancholy channel.

Of the two, however, only Obama seems capable of the kind of transcendence that Bobby Kennedy flirted with in his most moving line, paraphrased from his older brother by way of George Bernard Shaw: “Some men see things as they are and say, ‘Why‘? I dream of things that never were and say, ‘Why not‘?”

It’s been some time, too long in fact, since anyone looked the part of such a line, or had its face in hand. Win or lose, and win he should, Obama does.