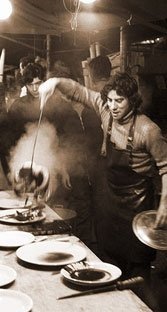 ast week in the kitchen of the Rome restaurant where I work I was handed a large octopus that probably weighed about 2.5 kilos and told to slice it into one-centimeter, paper-thin pieces. The slice, dice and discard process took half-an-hour and left me covered in slime.

With its eight suction-cup covered tentacles and bulbous head, the octopus (polpo in Italian) is perhaps the least likely sea creature anyone would consider bringing home from the market. But while “taming” it takes some work, the gangly cephalopod is a versatile cooking ingredient.

Fresh octopus is hard to find. Out of water, it spoils fast and the meat quickly toughens. Many argue that the freshly-frozen version is a better choice — unless you’re out fishing.

Then there’s dealing with the meat. If not softened properly it’s very rubbery. Carry the softening process too far and the meat dries out and becomes stringy. It’s all about finding that happy middle ground.

Fishmongers around the world go to extremes to break down the creature’s very fibrous flesh. Some beat it against rocks; others boil it in wine-corked water. I even read about a brave soul who put the creature in the tumble cycle of his dryer (which apparently worked quite well!).

While the unusual options are fascinating, a few less drastic steps can help with “domestication.”

For starters, immediately freezing an octopus helps soften the flesh. But freezing alone isn’t enough. Once frozen, completely submerge it in a large pot of cold water. After that, squeeze in the juice of a whole lemon and bring the water to a boil. Once it’s boiling, turn the heat down and simmer until the meat is tender.

The timing depends on the size of the octopus. The largest specimen ever found weighed upwards of 70 kilos, but typical market catches peak at 1-2 kilos. A general rule (not hard and fast) is about 45 minutes of simmering time per kilo. The meat is done when it yields easily to the tip of a small sharp knife. It should have the consistency of a boiled potato.

When it’s ready, remove it from the water, let it cool, and pick your serving option. Sauté it for a few minutes with olive oil, lemon juice and parsley, and you get a light antipasto. You can chop it up finely as a surprise addition to a cacio e pepe, or slowly simmer it with a rich tomato sauce for a hearty main course.

A slight linguistic side note: there are three accepted plural forms of octopus. The most common is octopuses, the anglicized version. After that comes octopi, the plural from the Latin ending -us, although some object to this because the word comes from the Greek ὀκτάπους (eight-foot) and should therefore be octopodes.