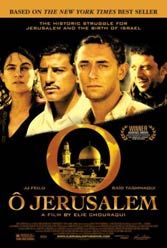 Larry Collins and Dominique Lapierre published their fact-based “O Jersusalem” in 1972, a year before the Yom Kippur war. Hailed at the time as a balanced (if overblown) account of the birth of Israel, the book lay fallow for decades. Apparently inspired by post-9/11 relevance, director Elie Chouraqui simplistically merges the book’s 600 pages into 90 minutes and emerges with a tediously impersonal epic whose swelling soundtracks fills narrative holes.

World War II veteran Bobby Goldman (JJ Feild) meets Saïd Chahine (Said Taghmaoui), an Arab student in New York. They bond and make fast for war-torn Palestine, only to find themselves on opposite sides of late 1940s Arab-Jewish struggle. When Ian Holm appears as David Ben-Gurion, silver-haired and aquiver, you get the sense Chouraqui is generating cartoon history. The British occupiers are the most convenient villains.

But a movie with “Exodus” pretensions demands believable characters and a modicum of subtlety. Taghmaoui and Field don’t stand a chance amid choirs and strings.