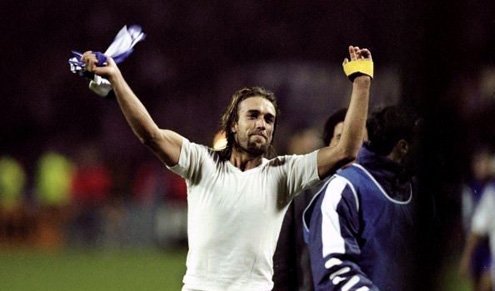 ne of three things usually determines how you feel when you get up in the morning: one is your stomach, the second is your head, and the third is your heart. Your stomach waits on how much you ate the night before, your head on what you remember, your heart on who or what you see when your eyes open. The rest — work, weather, bills, the ticket on the windshield, is all small stuff.

But here in Florence there’s The Fourth Element, a soccer team called Fiorentina. And that team, beloved as La Viola, is back in Serie A, the top echelon of Italian calcio. It’s back after two years in what Florentine poet Dante Alighieri would have called calcio inferno, soccer hell, the league’s lower divisions, where teams have been known to flounder for an eternity.

Florentines are hopeful again. Hopeful, but guarded. Cafes are alive with discussion. When I lived on the other side of the Atlantic a New York Giants loss on Sunday never followed me to breakfast on Monday. When the Indiana Hoosiers beat the Syracuse Orangemen with a last second shot in the 1987 NCAA championship game, we cursed the kid who crushed the Orange, it stung for a day, but we soon filed it deep in our book of bad memories.
Not so in Florence, or any other Italian city. A serious survey would probably find a close correlation between violence, depression, the birth rate and the status of the team one supports. The game may last for 90 minutes or so on a Sunday, but thank God we’ve got the rest of the week to suffer and talk about it. Help comes in great volumes in the half-dozen or more daily sports papers splayed on newsstands everywhere. Calcio here ranks higher than just about everything other than food. It is God, and the stadiums are the cathedrals where the emissaries of God play, and the masses worship.

and his fascist regime didn’t build so many soccer arenas and sporting complexes for the fun of it. <i>“Uno stadio in ogni comune,”</i> the saying went. In his recent book, “Football and Fascism,” British historian Simon Martin credits Il Duce with developing, through the use of calcio, a national identity where none previously existed. In a brief telephone interview from Rome, Martin said, “It is the only mass cultural activity that gets into the heart of every house.”

While no one would argue the passion Italians have for The Beautiful Game — witness the chaos in the stadiums and streets around the country on any game day — some would argue that Florence is the hottest <i>calcio</i> piazza on the peninsula. Florentines, and Fiorentina <i>tifosi</i> in the outlying areas eat, drink and dream their beloved Lady. The walls of artisan workshops all the over the city, bars, bakeries, and butchers too, resemble boys’ bedrooms with pictures of their heroes on the walls. The purple fleur-de-lis, the team symbol, is everywhere: on a bumper, in a window, dangling from an ear, on clothing, tattooed on the small of a woman’s back, on a wedding cake, draped across a young man’s casket. People flock from the world over to see Brunelleschi’s Duomo and Michelangelo’s David, but most Florentines will tell you the city’s real treasure is La Viola. Many Florentines know that David lives here, but they have never paid him a visit.

Before I arrived here in 1990, soccer was that game where they never scored enough. There were no sharp singles. No long home runs. No grand slams, double plays, diving catches, no bench-clearing brawls. In short, there was no excitement. I had a lot to learn. But it was also the summer of the World Cup in Italy. I met a girl who invited me to a dinner at her cousin’s house in the country to watch Italy play against Ireland in a quarterfinal game. Italian calcio cannot be fully appreciated unless it is watched with a dozen or more impassioned Italian women. Italy won, advancing to the semis against Argentina, and a half-dozen girls emerged from the house laden with desserts, wrapped in nothing else but Italian flags. They set down the mille foglie, gelato, and bongo and danced. They sang the national anthem. Healthy, young, bronzed and olive-skinned Italian women were dancing and singing over an unexciting, ugly win. And what if Italy won it all? What then? Suddenly, I was glad to be in Florence.

The attachment to the national team, however, is nothing compared to one’s affinity for the local club, mirroring the regionalism that has always divided Italians. As the saying goes in Livorno, “meglio un morto in casa, che un Pisano all’uscio” — better a dead person in the house than a Pisan at the door.

My love affair with Fiorentina started the following September. I began religiously attending matches every other Sunday in Stadio Artemio Franchi. The fans sang a love song for the team: “O Fiorentina di ogni squadra sei Regina…” Oh Fiorentina of every team you are Queen.” At a game I struck up a conversation with the girl next to me, a reserved, soft-spoken 25-year-old Florentine nurse. One moment she was gently enjoying an ice cream cone, the next she pasted her face against the safety glass that surrounds the pitch, shouting curses I didn’t know existed, her face as purple as her Fiorentina shirt. And a glance around the stadium revealed she wasn’t alone: from five to 85 the passion was extreme. I am convinced of one thing — that grandfathers teach their grandchildren to curse at stadiums.
The 1998-99 season finally promised a serious run at the coveted scudetto, the league championship. With players like Argentinian striker Gabriel Bastituta, goalie Francesco Toldo, and Portuguese <i>fantasista</i> (creative midfielder) Manuel Rui Costa it was now or never. All the right pieces were in place for the assault on the title, an honor they hadn’t won since 1969. Proven winner Giovanni Trapattoni was at the helm, and by February Fiorentina led the league. Then, Batistuta was hurt. Dream over.

At the end of the following season Batigol, as he was known, departed for Roma. Mismanagement by then-owner and president Vittorio Cecchi Gori, was rumored to be driving the club towards bankruptcy. Trapattoni, harassed by fans outside his apartment, saw the handwriting on the wall and left for the national team. Toldo and Rui Costa departed the following summer. Roberto Mancini, now coach of Inter Milan, took the reins, but fan violence outside his apartment changed his mind, too. Florence’s tougher fans are some of the most unforgiving in the league: In 1990 they started a small urban war when then owner Ranieri Pontello sold Italian football legend Roberto Baggio to arch rivals Juventus.

By the summer of 2002, Cecchi Gori had buried the club in a €300 million hole. On Aug. 1, the club officially ceased to exist. Florentines handled The Great Flood of ’66 better. The city was like a morgue. A little more than two years later, the team is back and slowly crawling its way back into contention, if not for a championship at least for a berth in European competition.

Thanks to shoe mogul Diego Della Valle, Fiorentina is now an organized and serious club with high hopes. Bars and cafes are full of heated discussion. There are more police at the stadium, but there are also benefits: Depression is at a two year low, and rumor has it that the birth rate in the Renaissance City is way up.

About the Author: John Pitonzo

John Pitonzo is a literature and drama teacher at the International School of Florence. He has a monthly column, Postcard From Florence, with Calcio Italia, a British football magazine, that exclusively covers Italy. John runs a small farm in the Chianti in his spare time.