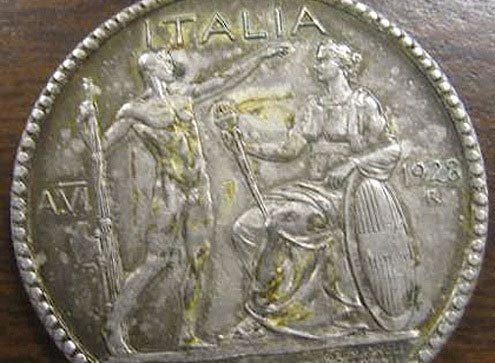 “The valuable ores once in the hands of the people are being taken away by the state,” he’d tell me.
M

y friend the old numismatist closed his Rome store in 1997. Too noisy, he said. The city had widened the narrow central street just enough to allow cars and motorbikes to idle and park on both sides. “Noise and fumes all day,” he said. Why, he asked, should he have to endure this after 50 years of hard work? I could think of no good answer.

In his heyday, the numismatist displayed Roman coins in half-a-dozen illuminated glass boxes at the back of the store. The most valuable coins — dull bronze lozenges with the lumpy faces of ancient royalty — were propped up under glass hoods atop tiny padded sticks. They looked like a pharaoh’s backgammon pieces.

“Once, Gregory Peck came in and bought a coin from the time of Tiberius,” the numismatist told me proudly. “We all knew who he was but we were polite and said nothing until he decided on the purchase. Then, we said, ‘Thank you, Mr. Peck. It is honor.’ And he smiled and said, ‘Grazie‘ in that wonderful voice he had until he didn’t.”

The numismatist always referred to himself in the third person — the regal “we” — in much the same way the popes did until John Paul I broke the tradition in 1978. His first-person homily changed the aloof papacy forever. Thirty-three days after subverting the sacred plural, he died of a heart attack. Ritual’s revenge, said some. Poison, said others.

The numismatist was most thrilled by his collection of silver 500 lire coins from the 1950s. Their later replacement with blue bank notes irked him. “The valuable ores once in the hands of the people are being taken away by the state,” he said, tracing the melancholy transition from silver to nickel, then lead, and finally to the prevalence of paper. He called the one and five lire coins, baked from tin alloys, “light as communion wafers.” On hot August days they in fact seemed ripe to dissolve.

The numismatist explained himself in the cryptic way of an underschooled American baseball manager. He bypassed direct speech in favor of a wisecracking, feral dialect all his own. “We will never be the same as we were before,” he’d say. Or, “Those who emigrated are better than those who left.” This knuckled babble filled the time between customers.

The numismatist cashed my American personal checks — few did so in those days. (“We admire your banking system because it uses money,” the numismatist announced cryptically.) He’d trim a little from the exchange rate — 610 lire to the dollar instead of 620, say — to make a profit. (“The check must be sent to where they send it to get back what it’s worth.”) Once, needing cash to pay for a round-the-world trip, took a check for $1,000, double his limit. “Find a pretty girl,” he told me. I didn’t.

After the numismatist vanished I relied increasingly on credit and debit cards, which before 1990 were exotic and all but useless. No one in Italy trusted them. They were the stuff of the rich. Cash machines were few. Plastic collided with Italian life late in the game, with the Holy Year 2000 (and its influx of tourists) fostering the transition. But even now, plenty of rural towns are cash-only.

Last week, strolling along the “Street of Personal Checks” — my pet name for the numismatist’s street — I saw him after a decade. He had paused to buy a newspaper at the kiosk by the old theater. Both the kiosk and the theater are endangered species; the kiosk because Italy’s incipient Web industry is eroding newspaper sales; the theater because people prefer fidgeting with TV at home.

No, I persisted. How do you feel?

Eighty-two, he answered, tapping the ribs beneath his vest with his fingertips.

“Do you know,” he said, “that this is the street where the store was?”

And then it began anew, as if it never ended. “All the noise and fumes. Why should I have to endure that? No one in a place of work should be forced to endure what comes to them when they don’t ask for it.”

Did he still live nearby? I pressed.

“Nearby to a time that doesn’t exist any more,” he answered.

What did he think of the euro?

This finally made him grin.

Rome’s common currency is people that don’t change, or won’t, and delight in the refusal. It’s a city in thrall to repetition.

“Oh,” says the numismatist, “Have I told you about Gregory Peck?”

And he re-enters his little shop of memories.