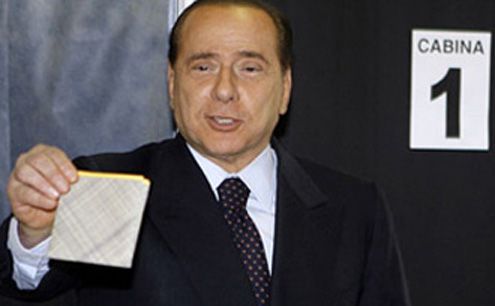 Berlusconi III puts him among the "greats" ...
F

or decades, the only way to tell between Italian carbon-copy governments was using Roman numerals, like an arcane exercise in papal tracking.

There was Andreotti II (1972), not to be confused with Andreotti V (1979) — different health ministers and incubent U.S presidents (Nixon and Carter). There was Fanfani VI (1987), which was nothing at all like Fanfani I (1954) — the intervening years having aged and shrunk “the little professor” (il professorino).

Bored, you could debate the undistinguished merits of Segni I (1955) and Segni II (1959) — he would later be elected president — or amuse yourself with the likes of Fernando Tambroni, whose tenure lasted six weeks in 1960 (Italy named him ahead of the Rome Olympics; he never earned a coveted “II”).

If you liked funny names, Mariano Rumor was your man. Not quite Mr. Noise, but close enough. Between 1968 and 1974 Mr. Noise ran a I, II, II, III, IV, and V. None lasted more than 18 months. A rumor of government. His New York Times obituary referred to him as a “mild-mannered, rotund man with a cherubic smile,” which begged the question what other kind of man could be tossed from office five times in six years.

So tip a historical hat to Silvio Berlusconi, whose Berlusconi III puts him in the company of Christian Democrats Andreotti, Fanfani, Moro, Rumor as the only men to head an Italian government three or more times (Ok, Alcide de Gasperi, Italy’s first postwar leader, went round eight times, but that was very much then). Giulio, Aminitore, Aldo and Mariano were Italy’s big four, more 20 governments between them.

Admittedly, Mr. almost-Noise’s accomplishment outstrips Berlusconi’s, while Fanfani reigns as the undisputed champion: He was 52 when he ran his first government, 79 toward the end of his last. Credit is also due Andreotti. His career spanned four decades — ending long before TIM made him an octogenarian TV commercial star. Curvature of the spine gave Andreotti miniature stature similar to Fanfani’s (who was 5-foot-2) while earning him the nickname “il gobbo,” the hunchback. Of Belzebù Andreotti, who allegedly had one too many Mafia friends, Beppe Grillo once quipped: “We’ll probably never know the truth about the guy. That is, until he dies and they dig the Black Box out of his back…”

Italian politics prizes endurance and sentimental persistence equally, which explains why Berlusconi, now 71, nearly teared-up at his grandfatherly re-selection. Stick around long enough and the Italian jukebox will play you again. Of Fanfani, who evolved into a kind of comic house-pet, pundits said rieccolo! — “Him again!” Toss him out the front door and he’d jimmy a window. Think Road Runner or Yogi the Bear with a political agenda.

Secondary figures can have the same gift. The Northern League’s Umberto Bossi, deep-sixed with heart disease five years ago, is back in his cigar-wielding spoiler’s role. Giafranco Fini, once deputy prime minister, is now… deputy prime minister. It’s Fini II all over again.

Familiarity breeds contempt, of course, but it’s also reassuring. No change means knowing ones friends and enemies so intimately they can’t surprise. And Italians, despite protestations to the contrary, resist change. Political recurrence (combined with a bad economy) may be a source of malaise — as the foreign media insists — but the malaise you know is better than streamlining Alitalia.

On the plus side, Berlusconi III has fewer parties with which to contend. The debacle that was Prodi II — a cacophonous proliferation of midge-sized groupings — has been trimmed back to about six major parties. The negative is that the downsizing is nothing new: Italy had only five influential parties between 1955 and 1990 — Christian Democrats, Social Democrats, Socialists, Communists, and neo-Fascists — and still reveled in institutional chaos: 30 governments 35 years. Is fewer better? Maybe. But it’s no guarantee.

What’s alarming in this not-so-funny picture is hiatus. Berlusconi’s populism made its first appearance 15 years ago, when Forza Italia was founded. Within a year he was prime minister. But he was one and gone, pulling a Rumor. The second time (2001-2006) he resisted, remarkably, for a full five-year term. Then came the leftist “interruption” — Prodi II and III. Now, a hiccup later, he’s back. It’s perfectly possible that Berlusconi would do a Fanfani, run Italy four times in four decades. Or come out of retirement at 85. The presidency might also beckon. Nice house, the Quirinale.

But before Grillo-style comedic activism (more acidic by the year) is let loose to again take aim at Italy’s immovable ruling class, consider the pattern. Italians like caretakers. For each Fanfani and Andreotti enemy there was a privileged fan. Say what you will, they barked, but these are the real tough guys, the true professional politicians, crusty folk who won’t take “no” for an answer and respond to defeat with a phlegmatic shrug. A few months or a few years later they’re back from the dead. In a sentimental culture straight-shooting motherland attachment has subliminal appeal. Berlusconi’s campaign message, stripped of hyperbole, sounded like “You know you want me.” (Similar to Barry Goldwater’s 1964 double-entendre, “In your heart you know he’s right…” which played to the pathology of shared secrets.) The left, by contrast, usually sticks to more functional messages — issue-oriented, even — and usually fails every second time. Witness Walter Veltroni, an “I Love NY” version of hapless predecessor Francesco Rutelli.

If Berlusconi plays to cliché it’s to some extent because that’s what he sees in his mirror. How else to rationalize an ingrained shamelessness that looks on making way for the next generation as ignoble? What else but ego fuels a political culture still rife with self-fulfilling favoritism? The two allow and encourage a spoils system is mostly unchanged despite half-a-century’s social progress in other areas. It’s protectionism of national self-indulgence.

Since political predilection is developed young — in high school for most — optimism and self-reliance (the kind that might generate a Barack Obama, say) is hard to locate. Available party faces — Walter Veltroni included — make a beachhead and stick around for a lifetime.

Call this unhealthy or malaise-like if you must. But bear in mind that to do so courts the Iraq risk — applying North American values and precepts to a culture that, while in many ways modern, eschews the non-indigenous as suspicious, even alien (and deplores alien-ness as false). Italian self-hatred is fine. Judgment from the outside is not. Contradiction is charm.

During his last stint, Berlusconi repeatedly rued his tough schedule. He was indefatigable on behalf of Italy. No one knew how hard he worked. Poor me. For which he was widely mocked. But hecklers should have flipped back to when another Italian prime minister got an American good housekeeping seal for “remolding the party machinery in his own efficient image: late to bed, early to rise, always on the job.” According to Time magazine, the leader believed in “ruthless pursuit of his own ambitions.” Not such a bad thing in Italy, it added.

That was Time‘s 1959 take on the Fanfani of Fanfani II. When the little professor was ousted, he typed a note to the Christian Democratic party leadership vowing to never again accept the top spot.