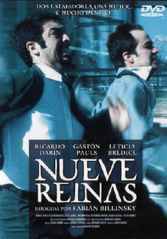 Argentine director Fábián Bielinsky provides 114 minutes of clever twists and turns in the company of two amiable swindlers. Figuring out who’s victim and victimizer adds to the fun.

Young and inexperienced Juan (Gastón Pauls) and pro Marcos (Ricardo Darín) meet in a gas station, where Marcos bails Juan out of a botched robbery attempt. The two con artists agree to join forces for a day, splitting the profits. They start small but soon get a once-in-a-lifetime chance to sell a sheet of rare stamps (known as the “nine queens”) to a rich buyer. Naturally, the stamps are counterfeit.

As a genre flick, “Queens” thankfully does without gunfights, explosions, and murders. Instead, it focuses on the skills of Juan and Marcos, who adroitly create their own world.

Pauls and Darín are great. So is the supporting cast. Oscár Núnez shines as Sandler, an old counterfeiting buddy of Marcos who delights in passports. Buenos Aires provides a perfect backdrop in a movie that sparkles from start to finish.