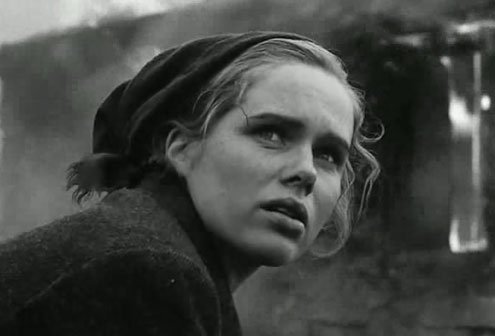 Liv Ullman as Eva Rosenberg: Suddenly plunged into a hell not of her making.
A

t a time when parts of American popular and intellectual public opinion frets over receding American power, it’s worth taking a fresh look at Ingmar Bergman’s 1968 “Shame,” made at the height of the Vietnam War but less an indictment of any war or ideology than a bleak cinematic sketch on the ignobility and futility of the sides peddled by combatants in the spirit of life-and-death marketing. Both sides in any conflict are convinced ends justify means. But in Bergman’s indictment here there are only means, and more means, and those trapped within them.

His approach couldn’t be simpler. He focuses on two former symphonic musicians on a remote island that suddenly finds itself in the front lines of some ill-defined struggle. Eva (Liv Ullman) and Jan (Max von Sydow), protected, or so they thought, by their marriage and intellect, are suddenly pushed into a tumbler of competing ferocities. They couldn’t care less who wins or loses; they’ve retired, or wish to see themselves retires, from the idea of sides. But the encroaching circumstances — in turn stressful, anxious and awful — make that position untenable.

They try, Eva tries, to be nice to those around them. She tries ignoring the sounds of guns in the distance. They listen to the radio for news. They internalize the stunning sight of cadavers in the water as they travel island-to-island. Eva dreams of having a child, but Jan has surrendered to the war. Increasingly, the hostilities form a marring, manipulative mood that begins tearing woman and man apart. Bergman, in effect, zeros in on the marriage strains to suggest that war’s strain is ruinous, amoral, and easily pushes the soul not toward the heroism of picture books but cowardice and compromise. Humanity is a vanishing act war gorges on for fuel.

The “shame,” presumably, is God’s own, for allowing these events to happen, if not presiding over their unfolding. Escape isn’t possible because underlying the immediate conflict is the idea that there’s conflict everywhere, on the island, on the mainland, in the soul.

U.S. critics, many of who called the film vapid, trite, and bemoaned the lifelessness of Eva and Jan, pounded Bergman. But lifelessness is the key. These are people who have been eviscerated by the causes of others. They have no resistance left in them. They have tried to step away from global folly, but it has gone off to fetch them, reminding them conflict is the world’s only sure thing. Both sides capture Eva and Jan. Both make them pose for propaganda interviews. Both interviews are doctored and spew lies. As these events unfold, the marriage cracks widen further to suggest some kind of larger human infidelity, as if hatred, not affection, were the lure to which we all at some point fall prey.

It was American President Franklin Roosevelt who, in World War II, advocated U.S. intervention to defend domestic homes as well as the “tenets and faith and humanity” on which all civil structure was founded. His call to arms dovetailed perfectly with the good vs. evil bedrock that grounded that conflict. After that, however, the waters grew murkier, and have remained that way since then. So it is that Eva and Jan have washed themselves up on an island, convinced harm can’t find them.

They’re wrong. Zeal has no boundaries, excites itself through action, and leaves desolation among those — civilians all — forced to endure the “noble” thrusting of others.

“Shame” was named best film of the year by the National Society of Film Critics, but the choice was polarizing, with many seeing it as honor based not on the film’s merit but on the debate of Vietnam. Ironically, just the kind of bitterly divided, irrational sides Bergman turned rabid and set to war in his film.