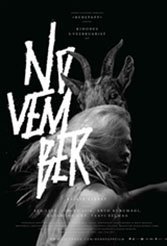 Surreal from start to finish, Estonian director Rainer Sarnet’s haunting film opens with an astonishing scene in which a scythe-and-rotor creation topped with a skull descends from milky black and white skies to abscond with a calf and carry it back airborne to its bearded owner. The thing is a “kraft,” a manmade helper without a soul — and when and where better to “meet” it than on All Souls day in rural Estonia of the plague era? All around is a 19th-century landscape swelled with ghouls and redeemers, werewolves and witches, smirking barons and hairy paupers.

The film trickles into consciousness like an ooze. Plot? Such as it is, between competing spasms of Satanic and Christian allegory, the story concerns a peasant girl Liina (Rea Lest) who loves a fellow peasant Hans (Jörgen Liik), who in is bewitched by a sleepwalking baroness with a penchant for rooftops.

All around is a 19th-century landscape swelled with ghouls and redeemers, werewolves and witches, smirking barons and hairy paupers.

“November” is not a narrative in any conventional sense but a tone poem or ode to a time in which pacts with the Devil were the norm and unrequited love a recipe for sorcery. Evil incarnate — the plague — takes animal form, wolves, dogs, goats. Peasants attend church but revel in their sinning. The brooding dead emerge, sheeted in white, to catch up on local gossip and punish misdeeds. The more Hans is smitten by the darkly enchanted baroness, the more his would-be lover Liina carries her passion for him toward holy self-destruction.

The going can be slow, even arcane, and the film’s menacing (and occasionally comic) spirit hard to translate into linear human speak, but director Sarnet evokes a time outside time wholly subjugated by superstition. Liina’s face is angelic, but this realm belongs not to lovers or even to mortals but to the “kraft.” Creating and maintaining such a mythic pitch is an achievement unto itself.