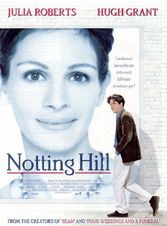 Director Roger Mitchell’s fluffy romantic comedy (written by “Four Weddings and a Funeral” author Richard Curtis) gets help from Welshman Rhys Ifans’s as Spike, Hugh Grant’s roommate, and Julie Roberts, who spoofs herself as superstar actress Anna Scott. Ifans is a perfect Grant-ruffler, a gangly jitterbug plugged into a socket. The plot needs him: stodgy London bookstore owner William Thacker (Grant) falls for big-time star Scott after she happens into his Notting Hill store. The amiable Grant has a nice moment when he fakes being a film critic for the magazine “Horse and Hound.” Roberts strikes some unexpectedly winning Audrey Hepburn notes.