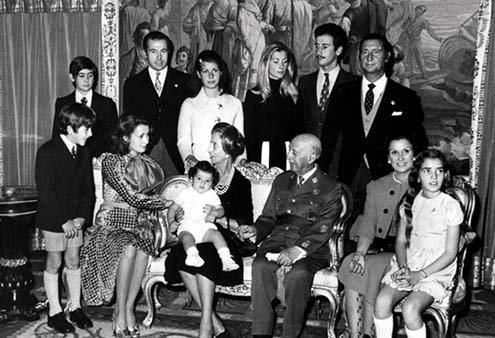 The Franco family was no exception to the size rule.
I

t’s been about 40 years since I was last pregnant. That happened in Spain toward the end of the Franco dictatorship. We lived for a few years in Madrid — my mother, my father, my cat, and our dog — in a very upper middle class neighborhood whose average family size I likened to a beehive. Ours was a fourth-story apartment in a building on Calle Nuñez de Balboa. Each flat occupied a full piso, or floor, less a matter of luxury than necessity.

I knew little about the expansive potential of nocturnal Catholicism until living in fruitfully multiplying Spain.

Take the Gassets on floor two: husband, wife, no pets, 12 children, and two live-in maids. Or the Martin-Martins on floor three: man, woman, 14 children, and three live-in maids. I was young enough to think it had something to do with the intake of carbonated water. Babies appeared magically, wearing out local wombs until women procreated into double-digits. I asked both my mother and father what all this meant, and precisely it happened, but both demurred. Sex and birth control were not their specialties. They were too busy quarreling in their marriage. As I result, I lost myself in the city of infants and children that was our building, children who themselves had no explanation for their proliferation. Paco my best friend just shrugged. “We are all many,” he said.

All these observations came before I became pregnant. That happened thanks to my incipient Spanish, which worked well if not for one severely damaged particle. My tendency at the time — I was 10 — was to borrow from English or Italian, two languages I knew fairly well (I was fluent in Christopher but I found it too difficult to teach). Both English and Italian applied the word embarrassed benignly. Not the case in unforgiving Castilian Spanish.

So that when I finally went to meet my father at the Foreign Affairs ministry, where he worked as a consultant, and was confronted by several of his fast-talking colleagues who wanted to know all about me, I replied that I couldn’t keep up with their linguistic pace, my Spanish was not yet good enough for which I was “muy embarazado.”

This remark elicited strange chuckles as ministry men looked at each other. One told me that I did not look embarazdo, let alone very much so, leaving me to enter none other than a very pregnant pause. I had no idea what was happening.

Later, my father emerged from a meeting to explain the small matter of usage involving the word embarrassed meaning pregnancy, part of Spanish culture in which a big belly was a shaming slow-me-down for which women needed to apologize. They were in an “embarrassed” state.

So was I, particularly when the story went viral, which at the time meant moving from floor to floor in our building. Paco brought me his childhood bib and a diaper.

My father chose instead to lecture me on the importance of understanding the nuances of language and suggesting I might start by learning to spell my English better. Nazis were not Notsies, my correct but unrecognized Christopher spelling. Unless I improved, I could never become president. Those were his words (never mind that my Paris birth already ruled that out).

These days, however, I feel vindicated. We have a president who would surely appreciate Notsies and spells hereby as “here by” and counsel as “councel.” I’m pretty sure he’s trespassed into embarrassment, if not pregnancy, something that no doubt cheers Notsies the world over.