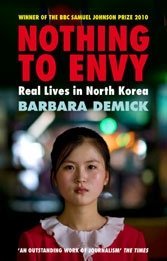 An ironic play on one of North Korea’s propaganda slogans (“we have nothing to envy in the world”), the title of Barbara Demick’s must-read book is so accurate it’s chilling. There really is nothing to envy about the lives of the six North Korean defectors chronicled within.

But too many outsiders know the country only for its mysteriously brutal and isolationist regime. Demick reminds us that, “in this bleak, dark country where millions have died of starvation, there is also love.” In the case of teenager Mi-ran and more privileged boyfriend Jun-sang, love hides in long walks under North Korea’s dark, electricity-deficient nights. Class differences required their affair be kept a secret although innocent (it took years for them to hold hands or kiss).

Mi-ran also hid another secret: she was fleeing North Korea for good. She couldn’t tell Jun-sang. It would be too risky. Even the couple’s most intimate conversations avoided the topic of the regime — there was no way of knowing if Jun-sang would snitch to the police. Mi-ran disappeared from Jun-sang’s life without a trace. In a later interview we learn it devastated him. Like Mi-ran, he wanted out. His confidence in North Korea had been waning for years.

Most North Koreans share Mi-ran and Jun-sang’s despair. According to Demick, the “Great Leader” Kim Jong-il’s attempts at brainwashing the country are cosmetic at best. Even a devout loyalist like Mrs. Song ended up a defector after her daughter tricked her into crossing the Chinese border. It wasn’t long before Mrs. Song realized what she’d been missing. Still, life on the other side is not always easy. For impoverished North Koreans who’ve lived their entire lives without choices, the infinite options offered by South Korea’s booming capitalism — even China’s communism — overwhelm. Freedom leaves them helpless and confused.

Demick, the Beijing bureau chief of the Los Angeles Times, writes in a novelist’s style. The results are bracing and wise. Her storytelling peaks in the tale of starving Dr. Kim, who had no other choice than to spend more time searching for food than treating her patients. When she finally escaped to China, the first thing she saw was a bowl of meat left in a field. The meal was for a pet dog. Even dogs in China ate better than doctors in North Korea. A 2010 National Book Award finalist and winner of the British Samuel Johnson Prize.