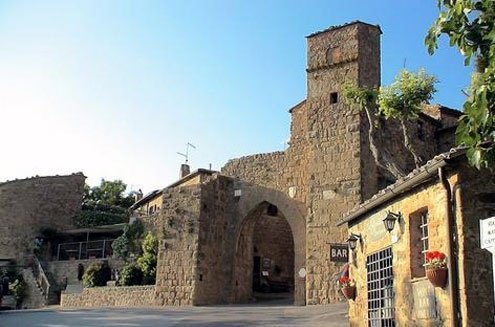 A tower opens the door to Monticchiello.
A

stone tower guards the gothic gateway to the medieval borgo of Monticchiello in southern Tuscany. Like a solemn soldier, it watches over the Val D’Orcia between the famous wine towns of Montepulciano and Montalcino. I noticed it on a sunny, September Sunday afternoon while sipping a glass of Vino Nobile di Montepulciano on the terrace of an osteria built into the massive town wall at the foot of the tower.

The Vino Nobile’s clear, garnet red color was full of life, like a twenty-something in a mini skirt with a “Wheee, what do I do next?” attitude. I wasn’t wearing a mini-skirt, but after leaving my three children and my then husband behind for three weeks for an intensive Italian language course in Siena, I was in a twenty-something mood, like a graduate student on an abroad program.

I stretched my legs toward the sun and leaned back in my chair to look at the Val D’Orcia below me, glistening with silver olive leaves and dotted with farmhouses in the distance. The Monte Amiata, was a soft, hazy blue on the other side of the valley, but the tower, just to my left, with its cold, grey stone façade, wouldn’t leave me in peace. It kept asking for my attention.

After lunch, I asked the proprietor, Daria, what was inside. She replied, “Oh, Signora, it’s an apartment that we rent out. Would you like to see it?” We climbed a narrow stone staircase, entered the cool, darkness of a cozy room with a sofa, dining table and an angolo di cucina. Then, another staircase led upstairs to the bedroom, round like the tower itself, lighter and more open, with windows that looked out over the valley. As I left that day, the twenty-something in me wanted to stay in the tower. Not by myself.

And just a week ago, I did. I stepped out of my car on a crystal clear February night. Everything was different. This time, the light of a full moon spilled over the still valley. Cold air silently rushed over my face and made my skin tingle: nothing like the caress of the September sun I had felt in that place before. Everything was different. Nearly 10 years have passed. I have residency in Italy; am single; my children are grown; and this time, I was not by myself at the tower in Monticchiello.

We climbed the stone steps and found the key to the tower hidden in the flower box by the door just as Daria had said that it would be. We opened the door and found dinner prepared: a pot of soup waiting to be heated, salumi, fresh bread, salad, cheese, local olive oil and, on the carefully set table, a bottle of Vino Nobile.

It was Lunadoro 2005, made by Daria’s twin brother, Dario, whose nearby Azienda Agricola La Bandita e Lunadoro was honored by Slowfood 2010. Soon, candlelight flickered across our glasses filled with the rich, ruby red wine. We raised them in a toast to the moment. We nibbled on cheese and antipasti, enclosed the cocoon of the tower. The Tuscan minestrone began bubbling happily on the stove and we poured it into bowls.

The Vino Nobile was fast disappearing. Its warmth relaxed the muscles in my back that had tensed against the cold. Its earthy, wistful flavors called up memories of a sunny, fall afternoon on the terrace. It almost seemed to laugh along with me there at the table.

I was floating along in a “luna d’oro” evening. The “golden moon,” the tower, the hearty food, and the touch of hands calloused but sensitive from tending vines, were casting their spell on me. Maybe the real magic was the Vino Nobile di Montepulciano.

It is a wine that often remains in the shadow of its famous neighbor, Brunello di Montalcino, also made from prugnolo gentile clone of sangiovese grape. Brunello is typically a more structured and elegant wine with more longevity, but that doesn’t mean it is always better. I agree that Brunello is the perfect pairing for a black dress, high heels and a bistecca fiorentina, but bring me a Vino Nobile for a soft autumn afternoon on the terrace or a winter’s evening in the tower.

Interesting producers (many of whom happen to be women) that make Vino Nobile in the €15-25 price range include: