Notes on a disgrace 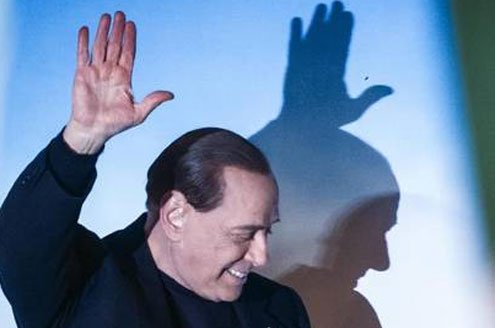 Even after his expulsion from Pariliament, Berlusconi remained defiantly self-involved.
H

e just can’t seem to walk away, or to leave anyone alone. In early November, days before he was expelled from Parliament, Silvio Berlusconi lectured a rally of his newly reformed Forza Italia Party in Rome.

On the vote to expel him, by then a certainty: “A coup d’etat.”

On former Prime Minister Mario Monti: “In my opinion he didn’t deserve to be nominated senator for life.”

On accepting community service as part of his recent convictions: “To do so would be to expose Italy ridicule. It’s unacceptable.”

On the Italian judicial system: “A puppet of the left” that is “committing a political murder.”

Banned for life from running for office and now officially stripped of his parliamentary seat, Berlusconi used the run-up to his expulsion to hog the media limelight, spur on his troops, and create as much domestic havoc as possible. Once again, Italy wasn’t his priority. That belonged instead to his ego. He feels he’s been wronged; others think he got away easy. Either way, he won’t let it go. The fight makes him salivate. “I’m not going anywhere,” he said after the vote.

His continues aiming his loudest and angriest words at his most significant (and stubborn) adversary: the judicial system, which is the epitome of any developed democracy. His view is absurdly fitting given his disdain for the law.

For more than a decade the 77-year-old Berlusconi has accused the Italian judiciary of a left-leaning political bias, calling magistrates and judges the tools of old-school communism. The laughable conjecture makes political sense in that Berlusconi has been dogged by legal investigations (most regarding alleged embezzlement and corruption) for most of his political career. His seemingly obsessive ideological focus on the judiciary has always been part and parcel of his own troubled legal circumstances. By attempting to diminish the judiciary, he hoped to make his legal woes go away. No such luck.

But even now, though twice convicted last summer, he goes on, this time surrounded by a new group of yes-people, including his 28-year-old fiancé Francesca Pascale. Leftist ideology, he told his “new” Forza Italia acolytes, pervades mass media, schools, and universities. Many of his lines are recycled versions of similar ones he peddled a decade ago.

What has always amazed me is his remarkable ability to sidestep any discussion of the real economy, the state of the markets, and Italy’s still-dire social circumstances (among the reasons he was forced to resign to make way for Monti in the fall of 2011).

Talking economics may not be a sellable concept for a populist, but it remains one of vital importance. As Berlusconi continues his rant, Italy is working to emerge from a three-year recession. The government of Prime Minister Gianni Letta recently announced an effort to raise some €12 billion by selling small stakes in eight state-controlled companies, including energy giant ENI. The move comes as Italy faces increasing pressure from Brussels to reduce a debt level now estimated at 133 percent of all economic output, behind only Greece.

Getting out from under these grim numbers should be any politician’s immediate focus.

But talking economic policy isn’t sexy, and Berlusconi has been around long enough to know that populism exists to distract people from the whys of their woes, not make them face up to them. It also deflects from concepts of accountability. For Berlusconi, all that matters is his fight for legal and political survival.

Yet Italy must face facts. According to an October report by the country’s national statistics institute, the number of Italians defined as living in poverty doubled between 2007 and 2012 to 4.8 million. Youth unemployment has surpassed 40 percent for the first time. Industrial output is down 25 percent from its pre-recession peak.

In a recent blog entry for “Euro Crisis in the Press,” an interdisciplinary project backed by the London School of Economic, investigator and theorist Robert Orsi issued stark assessment of Italy.

“Future historians,” he wrote, “will probably regard Italy as the perfect showcase of a country which has managed to sink from the position of a prosperous, leading industrial nation just two decades ago to a condition of unchallenged economic desertification, total demographic mismanagement, rampant ‘thirdworldization,’ plummeting cultural production and a complete political-constitutional chaos.”

This is a deeply troubling picture of what the future might have in store — all the more so as other Western countries begin to show signs of emerging, albeit slowly, from recession.

It’s up to Italian politicians to keep Orsi’s words in the realm of prophecy, an effort from which Berlusconi’s sideshow antics distract. Though the antics are likely to continue the national conversation must change.