Notes from the virus trenches 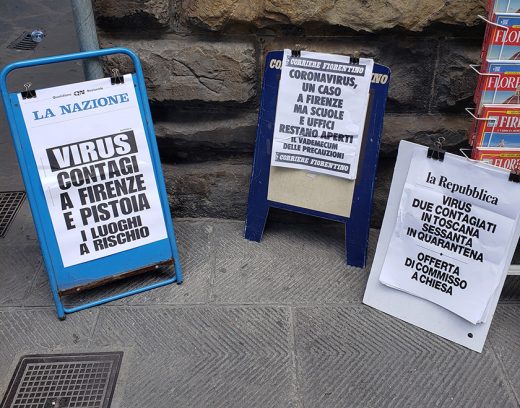 ormer U.S. First Lady Eleanor Roosevelt once made an unusual suggestion about how people should lead their lives. “Do one thing every day that scares you,” she said.

It’s a good bet that the legendary Mrs. Roosevelt did not consider walking out your front door as a source of fear. But with meidia reports about the spread of the coronavirus choking the headlines each morning, that is exactly what many people feel. It may not be the Black Plague, but going out is something some people think twice about. 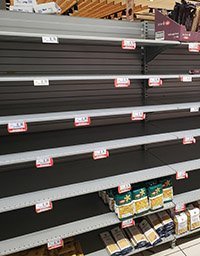 Today, (Thursday, February 27, as I write) Italy has the unhappy distinction of having the fastest growing outbreak of the virus outside Asia.

I’m in Italy, in Florence, and the trepidation is evident. What’s more, I recently returned from the Veneto region, which now has dozens of virus hot spots and quarantined towns. Florence is in Tuscany, the region immediately south of Emilia-Romagna, which reported 27 new cases this morning. It appears inevitable that by the end of its march the virus will reach the end of the boot.

The mood here is, I suspect, much like that in other places where the virus has exploded into the sole topic of conversation, uncertain, confused, and rich in trepidation. Humans are worriers.

Daily life these days is a mixture of the normal and the strange. For example, on Monday and Tuesday, after weekend reports that virus cases had grown by some 400 percent, panic buying and hoarding were on full display. Today, some of the bigger supermarket chains, including Coop and Esselunga, are still reeling from this fear-generated onslaught. Shelves remain forebodingly empty.

Tourism is down (even considering these are the slower winter months). For merchants, this an unsettling harbinger for the summer months to come. Moreover, the virus has so far most affected Italy’s industrial north, the driver of its hobbled economy. Long-term slowdowns could have severe consequences.

Gone are the fleet of buses that on normal days line the biways along the Arno River, most carrying Asians on day trips from Rome. One or two might appear on some mornings, but no more.

At the same time, crowds lined up to visit the city’s Duomo, the city’s 15th-century cathedral, are as long as ever, and in one line I saw that only a single tourist was wearing surgical mask. Grocery stores such as Conad City remain fully stocked.

The Italian government hasn’t helped stem this confusion. On the one hand, officials quickly point out that most sites are open and tourism continues. On the other, they have cancelled the free first Sunday of the month admission policy for museums nationwide, apparently to reduce attendance. What is one to think?

So far, both Florentines and visitors have shown remarkable resilience.

Of the 50-some American University campuses here, five are now closed (with more to come), with students sent home as quickly as possible. The underlying fear is that should the contagion spread, they’d be stuck in quarantine indefinitely.

Once again, however, the coin has two sides. Walking near Palazzo Vecchio, four students ready to head back to New York talked about how how they’d enjoy getting “stuck” in Rome while awaiting a flight home.

In short, no one wears masks (largely ineffective anyway), and everyone seems bent on getting on with their lives.

To be sure, Florence is very different from more northern Milan, where public movement has been reduced dramatically. But both cities have been stricken by the same sense of confusion that relentless virus reports have turned into a pathology. 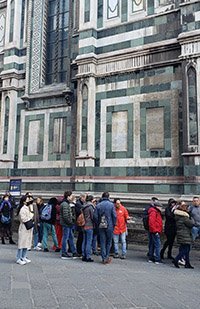 Despite the virus scare, lines of people waiting to enter Florence’s Duomo have gotten no shorter.

The confusion hasn’t been helped by comments from expert agencies, including the World Health Organization, which has pointed out that four out of five Italian patients at first felt mild only symptoms, or none at all.

That’s because corona virus is, after all, a flu. Its victims are very much like other flu victims — they slowly begin to feel unwell, and then grow worse. That’s the flu as it has been everywhere in the world for decades. Its favorite targets are the very young, the very old, and those already weighed down by other illnesses.

For now, Florence busily works by day and plays by night. The enoteca near me spills customers into the road nightly, with revelers shouting wildly over one another, as Italians are wont to do. They clutch their wine, smoke their cigarettes, and laugh.

This country has survived the Caesars, the Huns, the Visigoths, the Borgias, the Medici, civil war, Hitler, and Mussolini — not to mention centuries of cholera and malaria. Something tells me the attitude toward the virus, while no doubt wary and not a little angry at government incompetence, strikes all the right notes, as if Dante, whispering from above or below, were busy telling one and all, “This too shall pass.”