Not With My Face 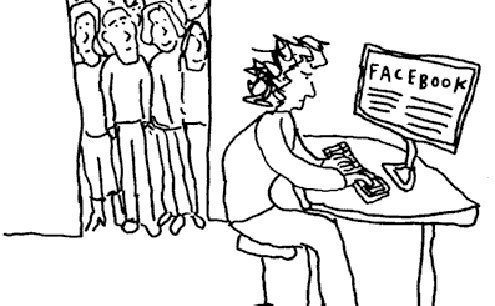 ot long ago a friend asked me to join Facebook. Why waste time on private questions that already had public answers? Friends, food cravings, photos, lists and lusts; everything fit to print, and less so, was web-ready. My curiosity, pre-empted.

But how could she know them? The questions, I meant.

But why? At face value social networking sites are chatty contrivances that help people broadcast their auto-snooping. Cyberspace preening is unskilled if time-consuming assertion. So why not join the egalitarian carnage?

In his farewell letter to staffers at the Wall Street Journal, an editor colleague who is moving to the academic world noted what he called “the exploding audience.”

He had come to understand, he said, “the power of multimedia journalism, the influence of a single link on Drudge or Digg…”

But I don’t read Matt Drudge — because he and his mates, male and female, shout too loudly for my taste — and I don’t dig Digg, which still seems to me the misspelled word for burrowing, because I worry that customizing reduces serendipity. (Reddit, meanwhile, sounds like the Italian word for income).

Social networking sites are toys of exhibitionism. Not a bad thing when it comes to making your way through “the lonely crowd,” David Riesman’s 1950s definition of the exurban disconnected who’d lost track of life’s why.

If posting cajoles identity and tempers that loneliness — “I post therefore I am” — why not? It’s all good, my friend insists. Democracy at work.

So why won’t I join?

That I’m a snob goes without saying. It’s also not the point. My personal traits are irrelevant, and personal — which is the point.

What I’m unwilling to share — and I’d be compelled to, in a pretend or real way — is just what I protect by choice: Intimacy.

Not just visual intimacy, as in my looks (now a statement sexual temperature, as in hot or not) or status (the brands you are), but also casual clues about how my pieces fit.

Pictures, friends, quips, stories, preferences, ditties, songs: These are bits and pieces of a self-generated whole, signposts for fellow prospectors to recognize or fictionalize; they are a welcome mat for instant assumptions. It’s the crowning conformity, the surrender of idiosyncrasy.

My editor colleague is right about links on Drudge or Digg. They’re confident little dreadnoughts that shoot to kill. Look before you leap isn’t the norm.

The instant segregates discretion. And intimacy. Surrendering takes far less time than explaining why you’d prefer not to.

In Washington of the 1960s my parents had a standby: “Don’t open the door to strangers.” (Or take candy). At the same time, they left the door unlocked at night.

So what was it about?

Boundaries. Few feared that the stranger at the door carried a gun or an ax or might unzip his pants. The interest was in the threshold that divided house from the world outside it. One was private, the other not.

That has changed. Internet strangers are “visitors,” maybe “unique,” maybe random, but their urgent vagrancy is prized. Mud is tracked from site to site with impunity. The intimate is shared and is therefore public. Which creates public expectation for all aspects of the private. Discretion yields to an increasingly intrusive and licentious common good: hopes and dreams, please meet lingerie and embarrassment. The free-for-all is ugly but free. And free should probably win that tussle — so long as it doesn’t impose.

Snobs by contrast keep to themselves. Their joining skills are suspect. Instead, they network tediously with their own words. Far from the madding crowd, available by request only, they make their faces, write their books, and build up wood for winter.