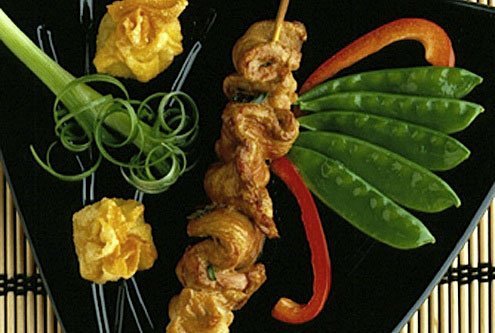 Bloom and Rokko are two of Rome's more established Japanese spots.
A

sk your average Italian what he or she had for dinner last night and chances are the answer won’t include Tex-Mex, cous cous or Canton chicken. In a country known for its cutting-edge modern design and trendsetting role in all things fashion, the desire to be di moda seems to falter at the tip of the fork.

From the cosmopolitan style capital of Milan to the national capital of Rome, it is difficult to find the vast variety of ethnic eats and creative international combinations that fill the plates of the hottest restaurants in New York, London and Paris. “World Food” is a trend only just beginning to take root in Italy — salsa, sake and ceviche are gradually creeping on to menus and supermarket shelves. But an Italian culinary passport can usually only take you as far as Chinese or Indian fare. Why has the Italian palate been so slow to globalize?

“There isn’t this big interest in ethnic cuisine that you have in other countries here in Italy,” says Gabriele Gasparo, a delegate of the Accademia Italiana della Cucina. “Italians prefer to maintain traditions when it comes to food.”

And that’s the way Gasparo likes it. The Accademia is a national, non-profit organization that promotes the preservation and integrity of traditional Italian cuisine. According to the mission statement posted on their website, they are charged with “protecting cultural patrimony of crucial importance: the Italian gastronomical heritage, which went, and goes, hand in hand with the history, tradition, new tendencies, and identity of a people.”

From the top of the boot to the bottom, the association rates restaurants serving dishes that would make the toughest critic in mamma’s kitchen proud. The right hint of lemon zest in Sicilian risotto ai profumi; the perfect balance of pecorino and pepper in Roman cacio e pepe; the proper cut of meat for a bistecca alla Fiorentina — all of these are put to the test by the discerning taste buds of Gasparo and his associates in the Accademia.

For them, food is a source of national pride. “When we speak of cuisine, we speak of the many Italian cuisines because there is not just one type of Italian cooking,” says Gasparo in an interview translated from Italian. “If you go to Los Angeles you can order a hot dog and have the same identical one in New York,” he says. “Here, no. There is a typical dish from Parma, from Mantova, from city to city you can find different types of food in every part of Italy.”

Meal miscegenation among dishes from the nineteen regions of Italy is almost blasphemous. It was the post World War II urbanization — with hoards of workers fleeing impoverished regional countrysides for jobs in the big cities — that led to the melding of once sacred regional traditions. “Regional cuisine was being compromised,” says Gasparo. “The Accademia began then in order to return to the traditional, to return gastronomic purity to regional cooking.”

Imagine what he thinks about Szechwan stir-fried fettuccine. “For curiosity I went to a Chinese restaurant once,” he says. “I didn’t like it.”

To be fair, Gasparo makes the distinction that Chinese food in Italy — as well as the limited choices in Japanese and Indian food — is generally not very tempting because it is not authentic.

Applying the same strict standards to foreign fare as he does to Italian, he is a purist: local products and uncompromising fidelity to time-honored traditions are the key ingredients. Where do you find fresh, local seaweed in Bologna?

Though lacking in wide-scale food adventurism, Italians do often have a wanderlust that takes them to remote and exotic destinations throughout the world — places where pasta, prosciutto and pizza are not the daily specials. When their mouths open, so do their minds. “Many Italians go to these places like in South America or Thailand,” says Gasparo. “When they return they want to recreate their experiences and so they go to those types of foreign restaurants here. They eat two, or three times but then they return to spaghetti.”

There are some restaurateurs willing to risk that the spirit of vacations past will linger a bit longer.

“The people that go out to London and New York want to go out in Rome and see something like that in those cities,” says Roberto Sebastiani. He is the owner of Bloom, a trendy Roman bar and restaurant that has defied the odds by remaining popular despite its fusion and sushi-heavy menu.

“In Rome it’s not easy to find a lot of places like this one,” he says. “In Italy, there are too many provincial people so we have a small target: trendy people.” But Bloom is hoping to broaden the market by making their exotic fare as palate-friendly as possible. “The flavors are not too strong,” Sebastiani says. So their pollo al curry is milder and less spicy than more authentic versions of the recipe. “Because if you make the real curry it’s really hard for the Italian people,” he says, rolling his eyes.

Bloom is one of the few non-Japanese restaurants in Italy serving sushi. In fact, the entire top floor of the sleek and slick restaurant is devoted to the art of fresh fish dishes. The sushi bar, manned by a Japanese chef, rolls out ten varieties and combinations of sashimi, nigiri, maki and more. “It’s the most popular item on the menu,” Sebastiani says of the sushi selection. “It’s one of the best in Italy because we spend a lot of money for the fish.”

From the main kitchen and Italian head chef comes dishes with French, Indian, Moroccan, Asian, and Latin flavors. Diners can start their culinary journey in North Africa with cous cous mediterraneo with tomato, shrimp, and grilled vegetables. Then it’s on to Cuba for black bean soup with herbed crostini and shrimp, or Thailand for fillet of gilthead fish with a chili-lime sauce and ginger. For dolci, a fusion of green tea and white chocolate make their bavarian anything but that.

Multicultural menus reflecting the fashionable, international cuisine trend have been popular in the United States since the early 90s, with the UK following closely behind. Sebastiani realizes that though his restaurant is on the cutting-edge by Italian standards, it’s a bit behind on the larger food scene. “Everything starts from New York, and then goes to London, to Paris, then Milan,” he says. “Milan, I think starts one year before Rome. It’s more international than Rome and there’s more money.”

Relative to Rome, Milan does offer more of a selection for globe-trotting gastronomy. According to The Sushi World Guide, an online site listing more than 3,000 Japanese restaurants in more than 1,000 cities, there are 25 sushi-sellers in Milan compared to the 12 in Rome. As for the rest of Italy, the site lists seven Japanese restaurants in Turin, and one each for Florence, Genoa, Lucca, Naples and Verona- a country total of 49. That’s compared to the more than 100 they have listed in both New York City and London. Though these numbers may vary with every opening and closing, along with undiscovered locations, the ratio remains the same.

Beyond raw fish, restaurants throughout Italy have begun to branch out beyond the boot. In Bari, Rasputin boasts “typical Russian food;” Florence has a bit of Brazilian flavor with Maracana’s South American barbecue; and Turin diners can take a giro del mondo thanks to weekly menus at Il Mercante di Spezia — the “fusion chef” creates new dishes every week inspired by the tastes of Egypt, Peru, India and beyond.

Perhaps working against the mission of Gabriele Gasparo and the Accademia Italiana della Cucina, the Italian food scene is beginning to change. There are more restaurants than ever before offering ethnic exploration at their tables. But the challenge is to fill the seats — the “If you build it, they will come,” school of thought doesn’t always work in Italy. The lagging mass appeal of ethnic and fusion eats leaves reservation books less than full of Italian names. Until that changes, that just means more room for those long-time lovers of global gastronomy.

— Bloom — The decor is as elegant and modern as Bloom’s menu: textured leather banquets, Philippe Starck lamps, sleek brushed steel bar and gold-leaf walls. The food is worth the trip but so is the after-hours scene; around midnight every night there is a DJ and dancing after the dining hours. Via del Teatro Pace 30, Rome. Hours: 7 p.m.-3 a.m. daily. Major credit cards. Tel. 06.6880.2029/06.6830.1808. Reservations required

Rajatabala has listings for ethnic restaurants in Turin and Milan. Among the types of cuisine listed are Peruvian, Romanian, Turkish and Sri Lankan

At Excite you can search for ristoranti stranieri by city. Select a city then choose the ristoranti link underA Tavolo.

Sites celebrating the Japanese presence in Italy, both searchable by city and restaurant name, are Nippon and Sushi-info

You can search this site by city or browse the entire country for Indian restaurants: India dinner Italy.

For more information on the Accademia Italiana Della Cucina, their website has information in English, Italian, French, Spanish and German. They also publish a monthly magazine and a yearly restaurant guide to locations truest to Italian culinary traditions. A selection of these can also be found at Accademia Italiana.

About the Author: Angela M. Ellis

Angela Ellis is a former network television news producer for NBC in New York. In Rome, she co-produced a 2-hour documentary special for the Discovery Channel on the DNA investigation of an Egyptian pharaoh, and field-produced for several national and international channels. As a freelance writer, she wrote several chapters for Avalon Travel's Moon Metro Rome 2005 edition and for travel websites. She moved to Rome in 2003 to pursue a Master’s degree in International Relations at St. John’s University. She also has a Master’s degree in Journalism from Columbia University New York. In 2007 she returned to New York, where currently she is a producer for NPR’s multimedia news show, the Bryant Park Project.