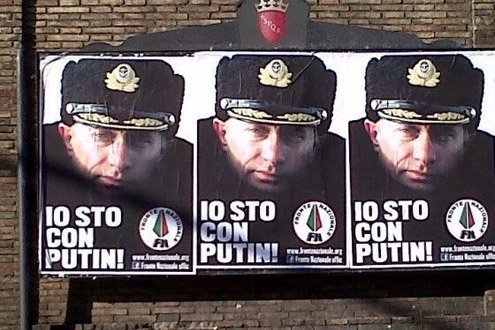 oward the middle and end of the 19th-century waves of Italian immigrants poured into New York City, trading a life of poverty, class restrictions, and religious conformity for one of opportunity. During World War II, American troops helped liberate Italy from Fascist and Nazi oppression. For many Italians, these two historical realities helped transformed America into a symbol of dignity, freedom and hope.

Even today, a trip to New York trip is a required pilgrimage among Italians. So when America shifts political and social direction, as it has with gay rights, Italians pay attention.

In America, the gradual legalizing of gay marriage and the improving of LGBT (lesbian, gay, bisexual and transsexual) rights are the backbone of a major 21st-century social challenge generated in part by mass media directness and greater sexual open-mindedness. People who for decades were ubiquitously hated, attacked, or just marginalized are finally being treated like citizens. Americans of all political persuasions are also becoming more aware of the widespread horrors of homophobia.

President Barack Obama, an open backer of same-sex marriage, has done more for the cause than any president in American history. One state at a time, slowly, the U.S. is moving to accept, tolerate and protect its LGBT population. Hardliners who embrace “good American Christian values” are increasingly finding themselves in bed with Russian despots and Islamic fundamentalists — and it’s a big bed.

As for Italy, Benito Mussolini’s infamous 1930s claim that Italy had no homosexuals is finally in the past. LGBT activist Nichi Vendola, openly gay, is a leading figure in leftist politics. Italians, some grudgingly, are beginning to realize that sexual prejudice may be denying their own sons, daughters, friends, and new citizens basic dignity, as well as putting some of them in physical danger.

I could mention Ali, so harassed by his boss he was forced to move to England. Or the gay adolescent boy admitted to a Milan hospital after throwing himself out a third floor window. He couldn’t take the abuse. He’s alive but he may never walk again. I could tell you about the way Milan police described the murder of a Brazilian trans-gendered person, as an act of unspeakable brutality. The stories are legion.

The Italian weekly l’Espresso recently made the subject of homophobia into a cover story titled “Anti-Gay Italy,” labeling sexual discrimination a national emergency. “Beaten, humiliated, and forced to endure discrimination in both in the workplace and at school,” read the introduction to the magazine’s seven-page national report.

But Italy’s economic and political turmoil makes it impossible to know who’s holding the country’s moral compass. Though Italy isn’t Vladimir Putin’s Russia in that it doesn’t openly persecute gays, systematic social justice remains out of the country’s reach, despite more progressive European Union positions. Homosexuality is now legal in all EU states and sexual workplace discrimination has been banned since 2000, with Germany, Spain and the Czech Republic considered the most forward-thinking countries.

Italy would prefer to pretend the problem doesn’t exist.

Pope Francis recently shocked Italians (and others) by suggesting the Roman Catholic Church should stop singling out gays. “Who am I to judge?” the pope remarked. Nice words from an unexpected source, but I prefer those of an old drag queen I know: “Sugar, don’t tell me you love me. Show me.”

The pope’s remarks did force me to remember that most of the people I love are both Christian and heterosexual. The best parts of Christian doctrine, those that emphasize love and acceptance, have rarely emanated from the Vatican — until now. They’ve come instead from simple people who put the “show me” ahead of words.

Yet the pope’s remarks may sharpen a tiny ray of light. While some will always use religion to justify bigotry, Italian Catholics can begin reflecting on whether homophobia is consistent with how they see themselves as Christians.

When it comes to open-mindedness, Italy has an arduous road ahead of it. Italian Gay Pride days, held mostly between June and September, are often little more than a mask for scars and tears. “When swimming in shark infested water,” the wise old drag queen tells me, wisely, “be sure to hang onto your wig, wear lots of lip gloss, and keep on smiling!”