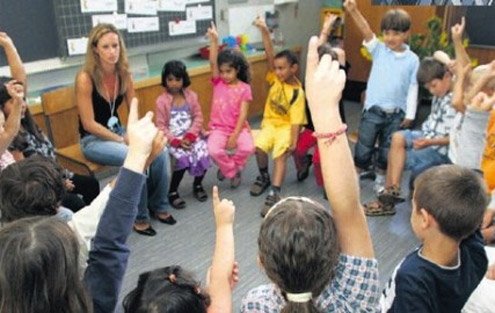 Making up your mind about Italian schools too soon can cost you.
F

lashback to a November night in 2006: My husband Marco hears my heavy sighs and almost inaudible sobs and puts down his book. “What’s happened?”

I can’t hold it in anymore. “What if I can’t help the baby with his homework in Italian?” I blubber.

I’m six weeks pregnant. My first son — another will follow — is still a mere zygote and I’m consumed with anxiety about his Rome education.

Marco’s response (after making sure that I was for “realz”): “If you cannot help him with Italian six years from now, then you are mentally retarded. But you are not. You are ve-ddy, ve-ddy clever.”

That prenatal night of scholastic preoccupation wasn’t my last. Feeling unprepared can make you insecure. But feeling unprepared when it comes to parenting can make you sick. No matter how many times you tell yourself that you’re not just ordering off a menu and that you’re actually trying to raise two human beings in a foreign land in a foreign tongue, you still worry. And you convince yourself that you’re worrying about your children.

Now, six years later, I can take a step back and honestly say a lot of the worrying was about me. We all want to look good and be right. And I was no exception. I was ready to shell out 15 grand to ensure my firstborn could enroll in international preschool.

But the universe has wonderful ways of setting up checkpoints for our mental baggage. When it came time to start international school, my son was dismissed because of his (albeit minimal) special needs.

Instead, I was forced to play in the sandbox of socialism — a local preschool. This didn’t thrill me for many reasons. First off, I don’t trust Italian public welfare. The health care system failed my firstborn during his premature birth and his subsequent developmental delays. The tax system is dubious at best and has burned my household more than once.

As for the school system, it’s poorly funded and teachers are generally poorly prepared to cope with learning difficulties. How, I thought, could I entrust my special needs son to a system weighed down by red tape and resistance?

Outside reassurance did no good. When we learned that Leonardo, entitled by law to sostegno, or special assistance, would start the year without it, I again scrambled to find an international school that could provide the necessary help.

By law, however, he’d have to start first grade in public school before we could request a transfer.

“Today is your first and last day of Italian school,” I told him on the first day. “You have to go today, so we can get permission to send you to an English- speaking school, and then you don’t have to go again.”

Looking back, it wasn’t a shining maternal moment. Marco and I dropped him off, then headed to the deputy principal’s office to request the transfer.

Like a Mexican immigrant busboy, I spoke to the administrator in simple sentences, trying hard not to sound like a language-deficient loon. I told her we’d worked too hard to set our child up for failure and that we’d managed to find Leonardo a place in a nice British school that had two teachers for every 12 students. She didn’t resist and said she’d prepare the necessary documents.

I left feeling victorious and light-headed. I could give my son what he needed and in my mother tongue. But what happened next shook my confidence and made me question my instincts.

At 1 p.m. the deputy principal called to say that our son was a very nice boy. He was bright, bilingual and seemed to make friends easily. She asked us to reconsider our decision. I appreciated the call, I told her, but was sure my decision was the right one.

At 2 p.m. I picked him up. He bounded out of the classroom and ran in to my arms screaming, “It was the best day ever!” I stopped breathing. He told me about his new amichetti (little friends) and what he’d eaten at the cafeteria.

Then came a harsh voice: “Signora, non sono d’accordo…” (“I don’t agree…”) A woman teacher stood in the courtyard crowd of swirling parents. Again I was stunned.

I was then summoned to the deputy principal’s office where the teacher gruffly told me: “You are wrong. He needs to stay in this school.”

I went into mother-in-crisis mode. The Mexican busboy became a high-level Mexican diplomat. I would not let another public system fail my son, I explained lucidly. I would not let bureaucracy stand in the way of his progress. I would do anything to ensure his success.

I was speechless, in any language. This abrasive, tough teacher was begging me to give her a chance. The deputy principal added, “Let us try.”

Dumbfounded, I said I’d think it over.

But I couldn’t have foreseen two women asking for the chance to invest in my son. I couldn’t ignore their sincerity. So I gave up looking good and being right and crossed my fingers.

Two months into the school year I still have little faith in the Italian public welfare system. But I do trust these women. They stood up for my son. They have moved mountains (not always legally). They have ensured he’s gotten everything to which he’s entitled and all he needs to be successful.

They have shown that, systems aside, it is good people who make all difference. The stars aligned. We were lucky. Oh, and I am having trouble helping him with his homework.