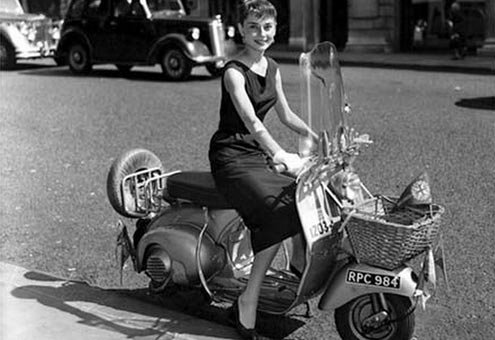 Audrey Hepburn's scooter love affair in "Roman Holiday" made her a star.
M

y obsession with getting a scooter developed as the best obsessions do: swiftly, passionately, and with minimum of reason.

Sure, I’d managed to live for three-and-a-half years in Rome without even wanting a motorino. Living in city center protected me from the public transport system’s worst vagaries. There was even a bus stop outside the front door of my palazzo, something that never failed to feel like a disproportionately large privilege.

Not that life by mezzi was perfect. It often baffled me how I’d wait 15 minutes for the 117 bus, only for three of them to show up at once, bumper-to-bumper, a phenomenon that always seemed to mock me personally. Still, I got used to it — and learned to always bring a book.

I also walked, a lot. As any visitor to Rome knows, strolling the cobblestone streets is among the city’s greatest pleasures. Of course, I’ve had to bite my tongue when I’ve needed to get somewhere and found myself stuck behind an Italian couple taking a passeggiata, blissfully unaware that anyone else might want to move at more than a mile an hour. But even on my most goal-oriented walks, I’ve reminded myself to look at the city around me: the pink sky over the Coliseum at dusk, the umbrella pines standing guard on the Palatine, the looming medieval walls of the Basilica of Santi Quattro Coronati.

But having made a life and a career out of embracing la vita romana, a scooter was a necessity.

For a long time, fear kept me from considering it. Odd, since I’d bungee-jumped, scuba-dived and ski-raced… all before age 13. Why something any teenaged Italian could manage frightened me was a mystery.

Out of character or not, that fear was rational. Nearly every scooter-owning friend of mine had been in an accident. Almost everyone else had witnessed one. Besides, it wasn’t as if I’d never experienced motorino living: I was often on the back of the bike of one friend or another.

An article I wrote on Rome scooter culture sealed the deal. I spent a week hanging out with passionate owners of vintage scooters (some owned more than 30). For the photo shoot, I whipped around Rome’s most beautiful streets on the back of a 1953 white Vespa — the same year Audrey Hepburn famously took hers for a spin in “Roman Holiday.”

By the time winter faded into sparkling sunshine and warmth, I’d made up my mind.

Finding a motorino wasn’t hard. A local meccanico had a dusty-green model on the cheap. At a scooter shop, I found-for twice as much-a gorgeous Piaggio, brand-new and gleaming white.

But buying a scooter wouldn’t be the hardest part. Or even the most expensive.

There was, first of all, the passaggio, or change of ownership. Another €170, and more paperwork.

What about insurance? I stopped in an insurance shop to find out, roughly, the insurance rate for a new, 125cc scooter. “What’s your codice fiscale?” asked the man behind the counter.

“My codice fiscale?” I replied, confused. I wasn’t buying anything; I just wanted an estimate. Aside from opening a bank account, I’d never needed that jumbled string of government-issued numbers and letters for anything.

“I can’t give you an estimate without it,” he said.

“But it’s just a rough estimate,” I said.

He shook his head. “Without your codice, I can’t give you anything,” he repeated.

Well, fine. A little online research put insurance at between €500 and €600 a year, maybe more. Including helmets and the passaggio, even the cheapest scooter I’d seen was now up to at least €1,500 total.

Next question: the license.

When it came to whether I needed a patente to drive a 125cc, especially since I already had a U.S. driver’s license, answers differed. The meccanico told me I didn’t need anything at all. Friends told me they’d just gotten a patentino, a mini-license, by paying about €100 and taking an eye exam. The scooter shop was the bluntest: “Non ho nessun idea.” He had no idea.

So I took my question to a driving school. “You need a patente A,” the man there said. Finally! An answer!

My enthusiasm was short-lived. To get the patente A, I had to pay €260, submit to a medical exam (with a doctor of their choosing), and take a driving course. I then had to take a written test in Italian, get 36 of the 40 answers right (exam cost: €70) and take a driving test (€90). There also was an obligatory driving lesson (€25) and the cost of study materials (another €50). Oh, and the exams had to be booked 45 days in advance-so even if I hit the books now, it would be mid-April before I’d even have the chance to pass.

All this to drive a glorified bicycle?

The man saw the despair on my face. “It didn’t used to be so complicated,” he told me. “The law changed just two months ago.”

Of course it did.

If I sprang for the newer (and safer) bike, we were now talking more than €3,000, or what the average Italian makes in salary over the course of 2.5 months. Not to mention a lot more time… and hassle… and stress.

I still want la vita romana. But a big part of it, I have come to realize, isn’t owning a scooter. It’s deciding when the headaches are worth it. And when — as in this case, at least for now — they’re not.